Colorado Springs baker cooks up, and prints out, custom cookies made to charm 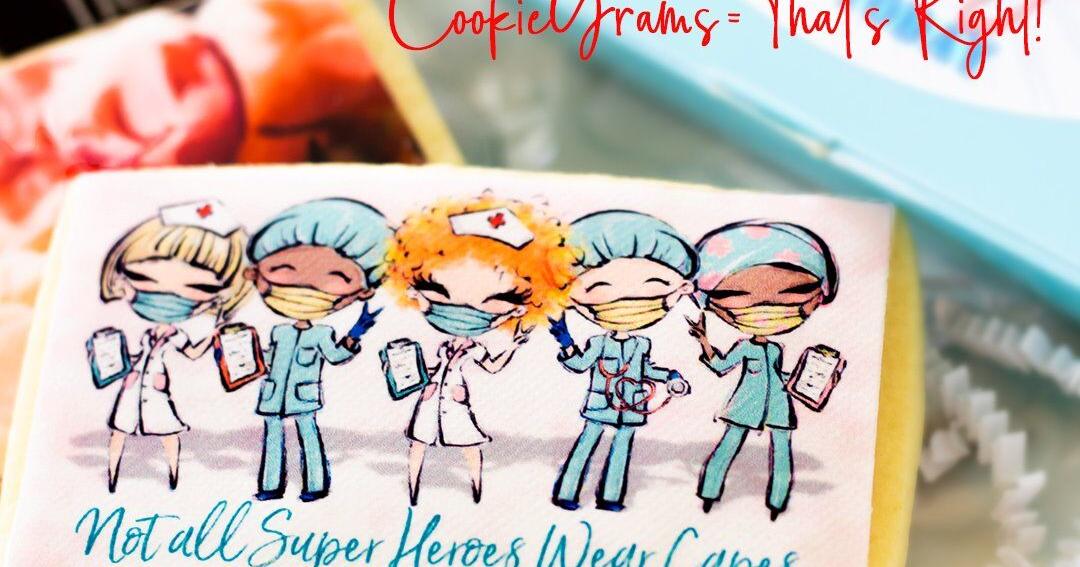 Christine Yocum’s father taught her how to bake when she was a young girl growing up in California. He also taught her that, when it’s your kid making the treats, there’s no such thing as a bad cookie.

“No matter how they turned out — too dry, too salty, burnt — he would always say ‘Mija, these are my favorite,’” said Yocum, whose father, Tony Chavez, dubbed her the “Queen of Soakers.”

“As a girl, being queen of anything was great. It was a compliment,” Yocum said. “As an adult, I realized it was because the drier the cookie, the more milk he needed to soak the cookie in to make it go down. So I was royalty, but I really wasn’t.”

The founder of Cookie Charm holds herself to a much higher standard, of quality and consistency, now that she’s grown and baking for a nationwide — correction, international — audience.

You’ll find no “soakers” among Yocum’s custom-designed gourmet logo and message cookies, unless dunking is how you choose to indulge. In fact, the creations are so artistic they might seem better suited for a shelf than a stomach.

“Typically, decorated cookies are pretty but they don’t taste good. They can be really hard, and have a nondescript flavor,” said Yocum, who said she wanted to make a cookie her dad would have enjoyed, and not just in an affectionate lipservice way. “I’ve had so many people say, they’re almost too pretty to eat.”

For one branded Cookie Charm cookie, created for Aventa Credit Union, the company asked Christine Yocum to create a logo that would send a message of “taking out COVID. Who knew that would look like?” said Yocum. “So we came up with this, Mr. COVID just annihilating (a cartoonish version of the virus molecule). We get some really fun and interesting and creative ideas to design cookies.”

Cookie Charms are more than a snack, possibly among the prettiest things you’ve ever digested. Their creator definitely wants you to eat, and enjoy, but that sense isn’t the only one to which she aims to appeal.

She’s got a new title these days:

“We call ourselves the Brandmasters of the Cookie Universe,” she said. “We really are next-level gifting. We put our clients’ brand front and center and we take a backseat to their brand.”

Colorado Springs actor and historian Don Moon commissioned a cache of the treats to celebrate his “swan song” after decades of portraying former president Theodore Roosevelt, coordinated with the Royal Gorge Route Railroad earlier this year.

“They took our train logo and the Bully Moose Productions logo and just turned it into this beautiful cookie,” said Moon. “Visually, it was perfect. And they’re also delicious.”

Yocum opened Cookie Charm in 2008, after a job with Focus on the Family drew her from California to Colorado Springs, and ultimately life left her at a career crossroads.

“My plan was to stay home while our daughter was growing up, until she graduated, then go back to work,” said Yocum.

She was teaching decorative painting part time, at Michaels and out of a home-based studio — coaching students on how to paint in the “one-stroke” style of Donna Dewberry — when a student suggested she apply her talents to an altogether different type of canvas. Yocum didn’t know anything about creating edible art, much less starting and running a business, but she loved to paint and she loved to bake cookies.

“I made that connection. I could marry my two loves … and honor my father’s legacy at the same time,” Yocum said.

Yocum started out creating designer hand-painted and “high-impact logo” cookies for individual and corporate clients, learning on the ground how to handle every aspect of a startup bakery. Hand-painting cookies, as expected, was a “very labor-intensive” process with built-in challenges to growth, said Yocum, whose company quickly found its niche in the corporate gifting market. Technology had something in the oven that would allow Cookie Charm to really get cooking. Printing was about to become a realm of multi-sensory possibilities, and a core of Yocum’s business.

“We have a dedicated printer that takes edible ink, so we put the frosting sheets in like a piece of paper and we hit the print button,” Yocum said. “We create the designs in Photoshop then we print them on very very thin layers of frosting and then put them on the cookie. And then we finish it off with an edible glitter…so you can sparkle from the inside out.”

The delicious process, she says, isn’t much more exciting than watching your home printer at work.

But you can’t eat what spools out of my printer!

“That would be true,” she said.

When the pandemic hit, Yocum said she wasn’t sure that Cookie Charm would survive. “I was telling my husband, if my business is closing I’m going to spend every dollar making cookies and spreading this hope and inspiration,” she said.

Driven, however, by “the belief that it was our duty to do something encouraging for our community,” she committed to doing her best. And that was cookies.

“While we couldn’t provide medical help, we could provide cookies for the medical helpers — and other frontline heroes,” said Yocum, in a May blog post on the company’s website.

An Operation Encourage package from Cookie Charm of Colorado Springs.

One program launched during the pandemic encouraged people to submit the names of local heroes who would receive a Cookie Charm “CookieGram” honoring their service.

“It was daunting to think that people were still going in, nurses, firefighters, first responders, front line workers,” Yocum said. “I thought it was going to be all firefighters and (medical) front line workers (nominated), but it was ‘My daughter works at Walgreens and they have to come in, and they’re afraid.’ We sent out thousands, all across the city, all donation,” she said. “Operation Encourage. It was our way of helping people connect with each other.”

Initially, the business operated in shared space with three other food-makers before moving to a bakery on Austin Bluffs Parkway and Academy Boulevard. After passage of the Colorado Cottage Food Law made such a move possible for Yocum — whose products are shelf-stable — Cookie Charm operated out of a home kitchen converted to commercial capacity capable of handling the growing business. It’s now outgrowing those confines, said Yocum.

Her father died in 2002, so he never got to see the other side of his daughter’s cookie redemption arc. Yocum believes the man who began her baking journey lives on in the confections — and ethos — at the business he helped inspire.

Tony Chavez knew the power of a personal touch, though. Yocum believes he would appreciate how Cookie Charm put teeth in that truth.

“He was such an entrepreneur. He just loved creativity and … he knew the power of personalizing things and using other peoples’ names,” Yocum said. “My daughter, when we talk about it, she says ‘Mom, Grandpa knows.’ I think he would have just eaten this up.”