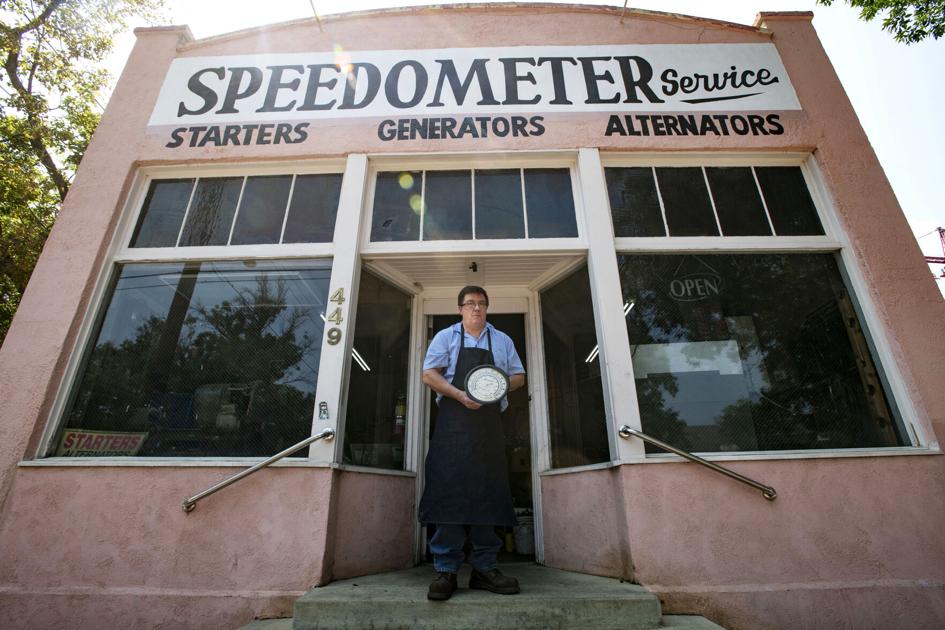 Elwood Buster II’s workspace for over 40 years at Speedometer and Alternator Service Co. could be a goldmine or a heap of junk. It depends on your point of view.

Jumbled car manuals are heaped on shelves. Countertops are strewn with screwdrivers and wrenches and weighted down by alternators and speedometers, and pieces of automotive electrical gear are propped in every nook and cranny.

“It’s like walking back in time,” Buster said, looking around the room.

Buster, who goes by the nickname Rusty, took over the auto repair business from his father, Elwood Buster, who bought the business in 1957 and then purchased the building that housed the business, at 449 E. Kiowa St. on downtown Colorado Springs’ east edge, in 1961.

Previously a grocery store, the 16,000-square-foot shop saw thousands of collector and hot rod cars roll through its garage over the years.

“Where the parking lot is, there used to be a house,” Rusty said. “And when my dad bought this building in ’61, he bought the house next door. So we lived next door to the shop. So I was always in here and grew up around guys that like cars.”

Elwood Buster II, who goes by Rusty, runs a test on an alternator as his shop, Speedometer and Alternator Service Co., in Colorado Springs on Wednesday, August 11, 2021. Rusty took over the speedometers, alternators and generator repair business from his father, Elwood Buster. He is closing the doors after 64 years in business and plans to continue fixing only speedometers at his home. (Chancey Bush/ The Gazette)

But like many retailers and small specialty businesses such as his, Rusty discovered in recent years that he was losing the sales race to online competitors. After 64 years in business, he decided to close the shop for good.

“Competing with the internet is really hard,” Rusty said. “Now, people can go online and buy starters and alternators cheaper than we can fix them.”

Rusty stopped rebuilding speedometers, alternators and generators this month and began liquidating the store’s merchandise, with a plan to continue fixing only speedometers at his house.

Rusty sold the property to a real estate developer who bought several surrounding properties, too. The developer told him there were no immediate plans for the plot, Rusty said.

“When the developer came by and made an offer on the building, I weighed out all of this and decided that the offer to sell would let me close down that portion of the business on my own terms, instead of trying to ride it out another 10 years and then being forced to close down,” Rusty said.

As a teen, Rusty spent his summers and afternoons helping his dad in the shop. He never planned to spend his career at his dad’s car shop, but one full year spent working at the business after high school turned into a lifetime.

“I just kind of fell into the routine,” Rusty said. “And then never left.”

The transition of the business from father to son, however, was not an easy one.

While in the shop one day in 1989, 74-year-old Elwood Buster was visited by several of his longtime friends.

“They were all just having a bull session, like sitting around a general store,” Rusty said. “And I didn’t get any work done that day, because I was just listening to all the stories.”

The time came to say goodbyes, and the elder Buster went home because he didn’t feel well. He died that night.

“The hardest thing I’ve ever had to do was to call those six or seven guys and tell them that he passed away,” Rusty said. “And each one of them could not identify why they had stopped by. They just (said), ‘Hey, I haven’t seen him for a while. I’m going to stop and say hi.'”

The family nature of the business went deeper than Buster and Rusty. Tom Nixon, who worked at the shop for 46 years, was a fixture of the store.

Nixon, 79, said “old-timers” will miss the store when it’s gone, but even now, he misses working in the shop.

“Buster was a great guy,” Nixon said. “I enjoyed working with him.”

During the start of August, Rusty was preparing to clean out the shop when a customer walked in looking for alternator repairs. Rusty broke the news that the business shut down over a week ago.

“Are you going to keep working on speedometers?” the customer, Nathan Nash, asked.

Rusty tested Nash’s alternator, hooking it up to a machine on the wall to see if it charged the proper way or if it needed to be replaced. The machine started to whir and hum.

He told Nash he could probably find the replacement at Quality Alternator and Turbo Service, one of the last shops of its kind in town, now that Speedometer and Alternator Service Co. is leaving the scene.

“Guys like him are hard to find,” Nash said. “And now they’re going to be harder to find.”