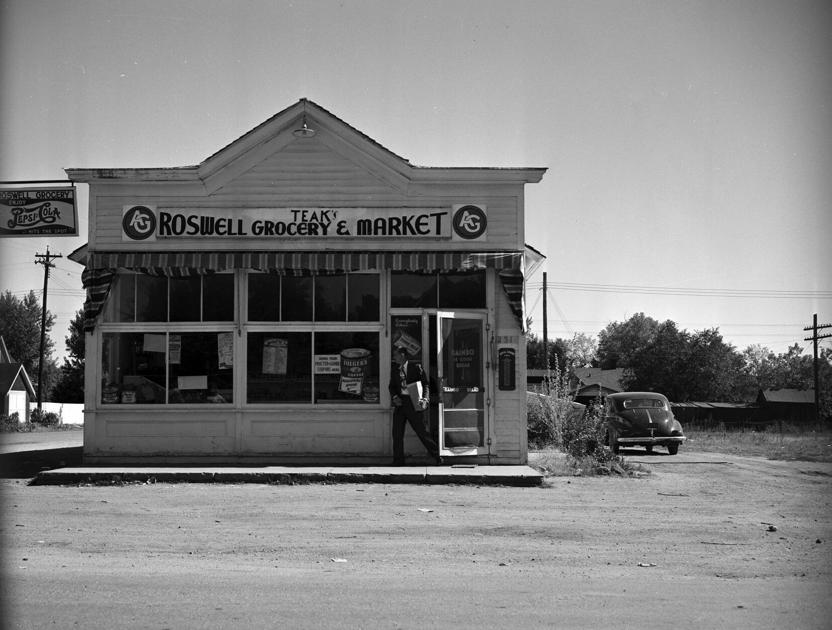 Say “Roswell” today and the location that leaps to mind is probably a few hundred miles south of Colorado Springs. Maybe straight up in the sky.

In 1888, though, if you lived along the Southern Front Range, you knew Roswell as Roswell City, a burgeoning burg just north of the Springs and the new western terminus of the legendary Rock Island Railroad line out of Chicago.

Shetland ponies on a ranch near Roswell, a community just north of Colorado Springs, Nov. 29, 1949.

“Mechanics, Artisans, Investors, Tradesmen, Professional Men, Day Laborers,” crowed an ad in The Gazette on November 7, 1888. “Here is the opportunity you have been waiting for ever since the announcement made last spring that the Rock Island railroad had decided to build to Colorado Springs.”

The ad encouraged readers to buy lots and get in on the action early (“Prices are Very Low, Terms Easy, And Values will Doubtless Double or Treble in a Few Weeks”), in a new town where, within three weeks, a “score of houses and stores” would be up and ready to roll in “A Second Colorado City” — a wink and nod to that other bedroom community that lay just outside the bounds of Brig. Gen. William Jackson Palmer’s tee-totaling frontier utopia.

Soon after those ads ran, a Gazette reporter set out to get to the root of all the buzz, why “everyone seems to be talking Roswell.”

He hitched a buggy north, to the new Rock Island roundhouse (now the Pikes Peak Trolley Museum, on Steel Dr.), and was amazed by what he found:

Groundbreaking ceremony in 1947 for Lincoln School in Roswell, an independent community 2.5 miles north of downtown Colorado Springs that was later annexed as part of the city. (Courtesy of the Stan Payne Collection, Pikes Peak Library District)

“A very busy and interesting scene presented itself. On every hand was a net-work of tracks and hundreds of railroad cars standing upon them or being switched into their proper places,” he wrote. “At least five hundred workmen were busy with hammer and chisel, either at work on the stone for the new sixteen-stall round house, the handsomest in the west, or upon the dozens of new residences or store house that are being erected.”

Named for Roswell P. Flower, a New York governor and mining investor who said he found the healing benefits of the local climate to be almost as good as that of Saranac, N.Y., Roswell sprung up as remote railroad whistlestop on the Denver and Rio Grande lines. The Rock Island expansion put it on the map.

“Colorado Springs at the time is growing really really slowly, because it’s primarily a vacation destination and a residential city. But that’s not enough of an economic engine,” said Leah Davis Witherow, the curator of history and acting director of the Colorado Springs Pioneers Museum. “When the Rock Island railroad says it’s coming, there’s this burst of excitement that signals to local civic leaders and business people that, oh, we’re going to grow in another direction.”

Planting roots in Roswell, a few miles outside downtown, wasn’t beyond the pale. The Rock Island Railroad was building company houses in Roswell, and it just “made sense” to keep going, make it an entire community built around the railroad, Witherow said.

“Think about it: In the 1880s, even though you’re just a couple miles from downtown, it was out in the country. It was isolated. It was farmland,” she said.

Then, suddenly, it wasn’t.

First came the Rock Island, then the Roswell racetrack, which was a “huge draw.” A gentleman’s racing club would host horse races, and there were also foot races, bicycle races and later motorcycle races.

“One article in The Gazette said they had 3,500 spectators at one of the horse races on the weekends,” Witherow said. “Because it’s outside the city limits, there could be gambling and some other illicit (drinking) activities going on.”

Despite the blast of energy with which it arrived, Roswell would never quite live up to those early ads.

“They sold lots, people built homes, there were churches, stores and a school, but it remains largely a neighborhood and its greatest attraction is the nearby racetrack,” Witherow said.

The timing of Roswell’s founding couldn’t have been worse. The rising star began to sputter, along with many other ventures, in the Panic of 1893.

“Colorado Springs in the 1890s suffered like many communities across the country from the economic depression that took place in 1893,” Witherow said. “Instead of Roswell becoming a city, it remains a town.”

In 1900, Roswell had about 450 residents, its own school, church and shops. It would remain a home for some and a destination for others, for its rail services, residences and for the racetrack, which continued to operate long after the population began to dwindle.

By the mid-20th century it was firmly a bedroom community and was officially annexed into the Springs in 1950.

The story of Roswell is also the story of Colorado Springs, a tableau of unique communities that once were unique towns.

“One of the interesting things about Colorado Springs is that we’re such a large city, and I think over time we’ve lost a sense of how Colorado Springs eventually subsumed these individual unique communities that had their own stories, and Roswell was one of these communities,” Witherow said.

Roswell was home to those who staffed Colorado Springs’ elite resorts and kept the vacation mecca running behind the scenes.

“In Colorado Springs, we primarily focus our attention on the idea of a wealthy or elite health resort, the beautiful hotels, the tourist attractions, the mountain,” she said. “What we rarely think about are the working class that actually built and maintained everything. I really think it’s important to think about all the people that it took to build the city of Colorado Springs, to recognize their contributions and the communities where they lived.”