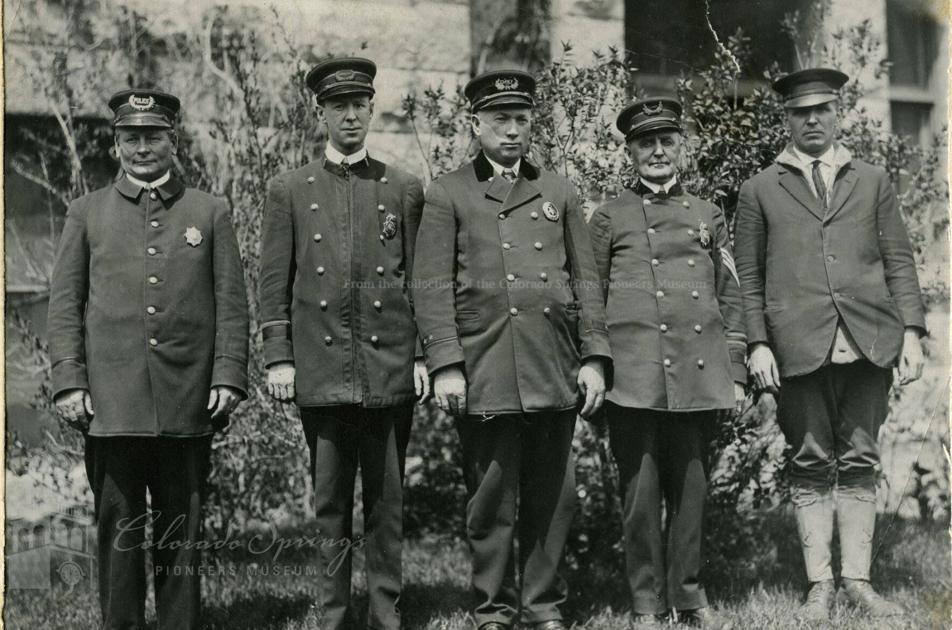 Over the course of the past month, The Gazette has highlighted some of the colorful characters and moments that have shaped Colorado Springs over the course of its history. But there’ve been some low — and in some cases downright gruesome — moments around here too.

We compiled a list of some of the most memorable crimes in Colorado Springs history with the help of local historical homicide buff Dwight Haverkorn.

Haverkorn, a former investigator with the Colorado Springs Police Department, has spent his retirement tracking and compiling historical materials on crimes that happened in the Pikes Peak area.

Here are five of the most heinous homicides Colorado Springs, and the broader Pikes Peak region, have seen.

The sleepy mountain town of Guffey was shocked by the murders of Carl and JoAnna Dutcher and their 15-year-old grandson, Tony, after Park County deputies conducting a welfare check on their home Jan. 3, 2000, found they’d been brutally murdered days before.

Tony’s throat had been cut on New Year’s Eve as he camped on a rockface that overlooked his grandparents’ home. Deputies found Carl and JoAnna inside, each shot several times with an assault rifle.

Deputies quickly picked up Palmer High School senior Jonathan Edward Matheny and sophomore Isaac Robin-McCain Grimes, who was once good friends with Tony, in connection with the killings, after raids on two homes turned up weapons taken from the Dutchers’ home.

But further interviews led state investigators to believe that Matheny and Grimes had carried out the killings on behalf of an organized crime ring that burglarized fellow students’ homes and killed to gather weapons for the ruling political party in Guyana.

Eventually, that led investigators to Simon Ewing Sue, suspected ringleader, whom they arrested during computer class on April 27. But after raids on two of Sue’s father’s homes turned up roughly 40 guns, including two stolen from the Dutchers’ collection, Sue told them he’d made the gun smuggling up to give Matheny and Grimes a sense of purpose.

Sue was ultimately sentenced to 53 years in prison, while Grimes and Matheny got 60- and 66-year sentences. Despite all three pleading guilty, Sue never admitted his guilt, saying that his counterparts were predisposed to kill and did so of their own accord.

One tragic morning in 2017, a driver on Old Pueblo Road came across the bodies of two teenagers lying on the shoulder of the road. The youths, later found to be Coronado High School students, were close friends Derek Greer, 15, and Natalie Cano-Partida, 16.

The students’ deaths were quickly ruled to be homicides, and were investigated by the El Paso County Sheriff’s Office, who arrested Gustavo “Tavio” Marquez a week later, on March 21, in connection with the kidnapping, child abuse and killings of the teens. Marquez had bonded out of jail less than two weeks before after being accused of separate, but similar charges.

Marquez’s arrest soon led to 10 more, including Diego “Casper” Chacon and Marco “Diablo” Garcia-Bravo, some of whom, alongside Marquez, claimed membership to a gang called the “Soldados,” further connected to the southern California prison gang known as “Sureños.”

Natalie Cano-Partida, 16, and Derek Greer, 15, were executed on Old Pueblo Road south of Colorado Springs. Their memorial is starting to show the wear of the years at the spot.

Cano-Partida, other suspects later testified, was the target in the killings, because she may have played a role in a feud with a gang that rivaled the Soldados. On March 11, the gang kidnapped Cano-Partida and Greer from a party and drove them to a remote location, where they were made to kneel before they were executed at point-blank range. Greer, who was described as inseparable from Cano-Partida, was killed because he was with her.

Ultimately, 10 people were prosecuted for various roles in the killings, with most pleading guilty to lesser charges. Chacon pleaded guilty to shooting and killing Cano-Partida, for which he received 65 years in prison, while Marquez received 32-38 after he pleaded to two counts of second-degree murder for being present for the murders. Garcia-Bravo, the only of the 10 to not plead guilty, was ultimately sentenced to 30 years in prison after he eventually pleaded guilty to two counts of conspiracy to commit second-degree murder in April. Other defendants in the case, who testified as part of their plea deals, said Garcia-Bravo was the other shooter in the killings.

One of the more gruesome crimes on this list took place in 1911, near downtown Colorado Springs.

Early in the morning of Sept. 17, someone stole an ax from a yard, slipped into two homes, and brutally bashed in the skulls of those inside. Six people in total were killed — Alice May Burnham, 25, and her children, Alice, 6, and John, 3, as well as Henry Wayne, 30, his 26-year-old wife, Blanche Wayne, and their 2-year-old daughter, Blanche — all of whom were left to be discovered by horrified neighbors several days later.

Authorities and citizens were shocked by the brutality and randomness of the killings, and struggled to turn up leads. One exciting moment came when they brought in A.J. Burnham, Alice May’s husband, who didn’t live at the home and was thus the only person to survive the night, to look at the bodies.

A.J. didn’t break out sobbing or go into a vengeful fit of rage — in fact, he seemed emotionless to bystanders, some of whom took that to mean he was their man. But A.J.‘s colleagues, who worked with him at the Woodmen Sanatorium, could account for his whereabouts the night his family was murdered, eliminating him as a suspect.

Ultimately, no one was ever arrested, even though rumors were rampant.

Haverkorn told the Gazette last year that after 13 years of revisiting ax murders from the West Coast to the Midwest, he thought investigators never found the perpetrator of the 1911 Colorado Springs ax murders because it was a railroad-riding serial killer that may have committed several other strikingly similar obscenities during the early 1900s.

On the night of June 28, 1896, officer Frank Bish was patrolling downtown Colorado Springs when he came upon a man acting suspiciously in an alley. Bish attempted to arrest the man, but moments later, several shots rang out.

When bystanders came upon Bish, they found that he’d been mortally wounded.

Bystanders scrambled together and assembled a search party, which went from door to door looking for Bish’s killer. Eventually, they heard another shot from a small brick building, where they found William H. Clark dead in an apparent suicide.

Soon after, bystanders said that Clark was often with a man named Patrick Coyne, which led police to a room on South Cascade Avenue that Clark and Coyne had supposedly shared the night before. Police found him there, along with a jacket with a burned hole in the pocket and other evidence that tied him to a recent assault on a police officer, as well as several other robberies.

A day later, Coyne, who said he and Clark never meant to kill anybody, confessed that when Bish had arrested Coyne, Clark shot the policeman in the back so that Coyne could escape. Coyne was ultimately sentenced to life in prison for being an accomplice to the murder a little over a week after Bish was killed. Seventeen years later, he was granted parole and released from prison.

In 1918, Colorado Springs and Denver police faced off with the notorious Frank Lewis-Dale Jones Gang in a series of angry gun battles after they caught up with the outfit months after they executed a heinous train robbery in Kansas.

After receiving a tip from an employee at a filling station on Colorado and Nevada avenues, Colorado Springs police caught up with the outlaws on Sept. 13, 1918 — a Friday.

Screen grab of a retrospective column on the day the Frank-Lewis Dale Jones Gang came to town in the Oct. 3, 1960 edition of the Colorado Springs Gazette-Telegraph by reporter Charles E. Dudley.

When police approached and told them to surrender, one of the bandits drew his revolver and started shooting at them. Chief of detectives John W. Rowan and detective John D. Riley returned fire, wounding at least one of the outlaws.

Seeing this, Rowan descended on the outlaws’ car; but Dale Jones, one of the outfit’s leaders, was in the front seat. Jones turned and shot across the side of the car, mortally wounding Rowan. Jones and his gang then turned to Riley, who had taken cover behind a nearby pillar, and proceeded to spray him down, hitting him once through his left eye, before taking off on northbound Nevada.

Hundreds of police patrolled Colorado Springs and Denver in the ensuing hunt for the gang, which included a band of bandits who dueled with Denver police later that day and the next. Eventually, all members of the gang were run down by the law, even after gang member Roy D. Sherill took a two-year vacation from a federal penitentiary in Leavenworth, Kan. — all except Jones, Margie Dean and Roscoe Lancaster, who killed police on their way through Denver to escape in Kansas City. Lancaster was killed there 11 days after the shooting in Colorado Springs, while Jones and Dean stayed on the run until Nov. 20, when, as they entered their usual gas station in Arcadia, Calif., the couple was ambushed by police waiting nearby.

Instead of surrendering, the desperadoes decided to match lawmen and drew their revolvers. They were riddled with bullets, and died standing. Between 1913 and 1918, at least nine police officers were killed by the gang across at least four states.