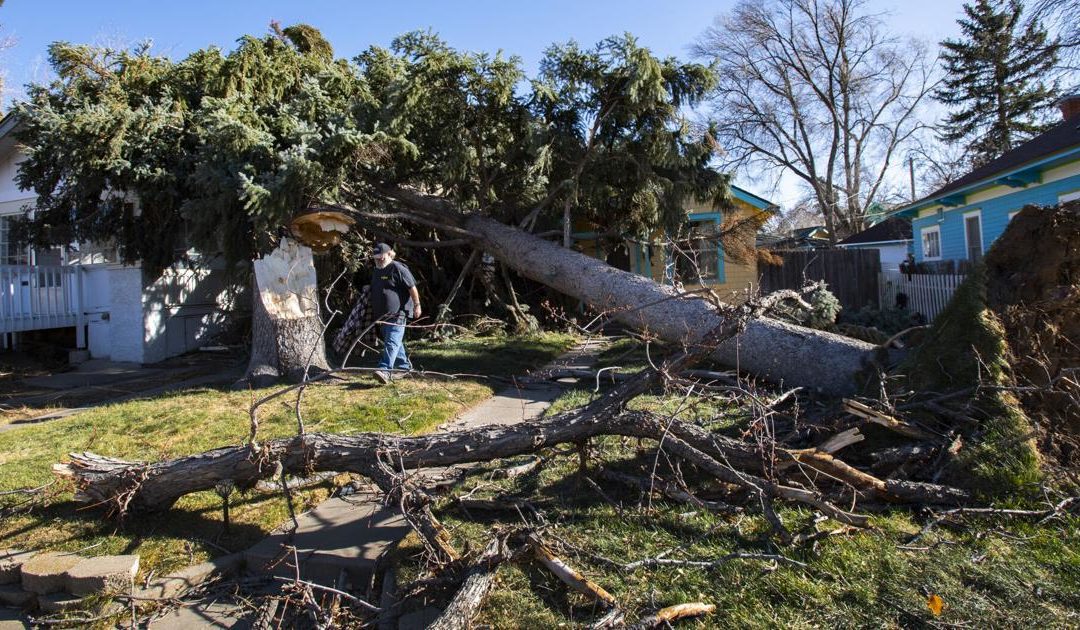 A windstorm with gusts over 90 mph plagued Colorado Springs and El Paso County throughout the day, causing multiple power and internet outages affecting a peak of 34,000 customers.

High winds wreaked havoc around Colorado Springs and other areas of the Front Range and Colorado on Wednesday, Dec. 15, 2021.

The windstorm was caused by a low pressure system characterized by a “tight gradient of surface pressure differences,” said Paul Steward, meteorologist with the National Weather Service in Pueblo. Steward added that the wind storm was assisted by the temperature drop brought on by morning snow squalls.

Ted Skroback, spokesman for Colorado Springs Utilities, said that while they had “all hands on deck” and that crews would be responding to issues throughout the night, overnight outages were still expected in some areas. He said that at around 3 p.m., over 34,000 customers were affected by power outages, the peak for the day according to Utilities’ webpage timeline.

Two semitrucks, one southbound and one northbound, were part of the truck carnage on Interstate 25 on Wednesday. These trucks were north of Briargate Parkway. More than a dozen semitrucks were blown over by high winds in the Pikes Peak region on I-25.

One particularly-affected area was the Old North End neighborhood just north of downtown. Near a peculiar intersection where Palmer Park Boulevard cuts through Cedar and Yampa Streets diagonally, there was nearly a downed tree on every block.

Tom Stevens who lives in the neighborhood had pieces of his neighbor’s rooftop in his front yard after wind gusts uprooted a Blue Spruce tree. Just a few doors down, crews with Colorado Springs Utilities were cleaning up a downed Ponderosa Pine tree. Stevens said the Ponderosa is the second tree that has fallen in two years for that particular neighbor.

As the winds died, the neighbors began walking around, checking in on each other and surveying the streets covered with branches, snapped power lines and pine needles.

“The main concern now is just the power,” Stevens said. “I expect it to be out into the night….We’re not gonna open the fridge that’s for sure. It’ll be a three-dog night. Nah, it won’t be that cold.”

Stevens who has lived in his home since 1983, said he and his wife were praying for safety as the winds beat his house. The two were prepared though, Stevens said they had secured items in the home the night prior.

Similarly, Mark Misfeldt, who lives a few blocks away, knew the tree in his yard was going to come down. The tree had been leaning since the bomb cyclone in 2019. Misfeldt’s tree fell as he returned from a doctor’s appointment. Luckily the tree landed in the street and no one was injured.

City forester Dennis Will advised people not to touch downed power lines, and not to try to cut up downed trees unless they’re experienced in using saws. Will said that was because trees toppled by wind are often under significant stress, and can cause injuries when inexperienced sawyers cut into them.

“We’re gonna work on the trees as fast as we can, we’re mobilizing a fairly large group of sawyers to go to work tomorrow morning,” Will said. “We found most of the damage was south of Fillmore, north of Cimarron, east of I-25, and west of Union, so that’s the block we’re gonna be working on mostly tomorrow.”

Will also noted that in some cases, residents will need to determine whether a downed tree is on public or a private property before calling the forestry department for help. Guidance can be found at the county’s windstorm webpage, but Will noted a good rule of thumb is to judge if the tree fell between a sidewalk and a public curb or gutter.

He said that fire crews also responded to a number of hazardous materials calls, most of which resulted from overturned trucks, but one of which included the Chapel Hills Mall, which was fully evacuated just after 2 p.m. because of a broken gas line caused by wind activity. The mall was quickly cleared and people were allowed back in around 2:30 p.m.

Royal said the department in a typical 24-hour period runs around 200 calls. On Wednesday, he said firefighters received nearly 650 calls between 10 a.m. and 3 p.m.

Several services and buildings throughout the city closed in response to the wind storm, including Mountain Metro bus services and the Colorado Springs Pioneers Museum. The Evergreen and Fairview cemeteries were also closed to anyone not attending services through at least Thursday for cleanup, the city said in the release.

City officials noted in the release that at least one warming shelter, at First United Methodist Church at 420 North Nevada Avenue, was opened for anyone in need. They noted the church wasn’t equipped for overnight stays and was just a warming shelter.

Kevin Mastin, executive director of the El Paso County Department of Public Works, said at the press briefing that the winds in some cases caused breaches in fences and gates responsible for corralling livestock, and that the department was working with brand inspectors to identify animals’ owners and get them home. He added that outside of Colorado Springs, the county hadn’t seen the extensive damage the city had.

He and Corey Farkas, with the city’s public works department, said their respective departments were assisting other departments in cleanup throughout the city and the county.

Farkas noted the last time the city saw a storm “similar to this, it took us the better part of two to three weeks to get all the big stuff cleaned up.”

City and county officials asked residents to use the city’s app or the county’s website to report downed public trees caused by the windstorms, adding that calls to 911 and other emergency lines were being inundated with non-emergency calls.

Smith said that preparations for the storm began on Monday, and said regional agencies were better coordinated and prepared than they were in 2017. Royal noted that most of the damage was done to roofs and other property, and that he hadn’t received any reports of fatalities connected to the storm.

“The lessons we learned from 2017 we certainly improved on during this event, so my hat’s off to all our first responders, they were ready to go,” Smith said. “I also appreciate the citizens, for what they’ve been through. I think we’ve been very fortunate during this event.”