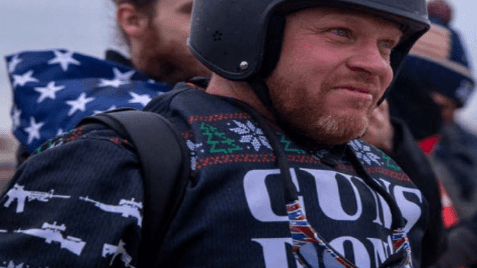 A Peyton man accused of helping breach the U.S. Capitol with a large metal “Trump” sign was arrested in Colorado Springs Tuesday morning.

Thomas Hamner was arrested on a warrant stemming from the Jan. 6 riots at the U.S. Capitol, where he’s alleged to have engaged in confrontations with police with other rioters, including pushing a large metal sign bearing the former president’s name on it into a defensive line of law enforcement officers.

Hamner, 48, is facing charges of engaging in violence in a restricted building or grounds, civil disorder, and assaulting, resisting, or impeding officers with a dangerous weapon. He’s one of several Coloradans who’ve been arrested in connection with the Jan. 6 riots, including U.S. Olympic Swimmer Klete Keller, who pleaded guilty in September to felony obstruction of an official proceeding before Congress.

Hamner’s being held at the U.S. Marshal’s office in Denver, according to officers on scene of his arrest, after being taken into custody by Federal Bureau of Investigation agents and U.S. Marshals assisted by Colorado Springs police just outside a Salvation Army center on Yuma Street. He’s being prosecuted by the U.S. Attorney’s Office for the District of Columbia, along with the Department of Justice’s Counterterrorism Section.

Thomas Hamner allegedly struggles with U.S. Capitol and Washington D.C. police over a metal gate at the U.S. Capitol on Jan. 6, 2021.

According to a U.S. Attorney’s Office press release, Hamner was set to make an appearance in court Wednesday in the U.S. District Court of Colorado in Denver.

The afternoon of Jan. 6, as U.S. Congress members sat certifying the vote count of the 2020 Presidential Election, authorities with the FBI allege Hamner was one among a throng of protesters assembled at the West Front of the Capitol.

That crowd, at first held at bay by a crude barricade of bike racks and a line of U.S. Capitol police, eventually breached the line, assaulting officers and breaking windows as they forced their way into the Capitol.

Thomas Hamner posing with a cutout of former president Donald J. Trump in front of the Washington Monument in Washington D.C.

Hamner, officers wrote in an arrest warrant, was captured in video posted to national news sites and social media wearing a Christmas sweater reading, “Guns don’t kill people, Clintons do,” as he and other rioters rammed a large metal “Trump” sign “into the defensive line of officers.”

Photos taken that day also depict Hamner and other rioters fighting with Capitol and Washington D.C. police over a metal gate, and struggling against barricades.

Those photos, along with other footage capturing Hamner that day, were corroborated by a person unidentified in arrest papers who said they knew Hamner and recognized him while comparing other photos of him.

Thomas Hamner as he was arrested the morning of Nov. 9 outside a Salvation Army center on Yuma Street.

On Tuesday, Hamner told onlookers that he was being arrested for being at the U.S. Capitol on Jan. 6, and joked that the officers arresting him were “lucky” he wasn’t running.

“I’m a runner, and I’m a fighter, but I ain’t that today because I know I’ve been doing right,” he appeared to say, referencing his “rap sheet.”

In 2015, Hamner was convicted of driving without a license, failing to signal, and obstructing a peace officer and resisting arrest, for which he was sentenced to 45 days in jail. Court records indicate he appealed that conviction, but show his sentence largely remained and that his case was closed.