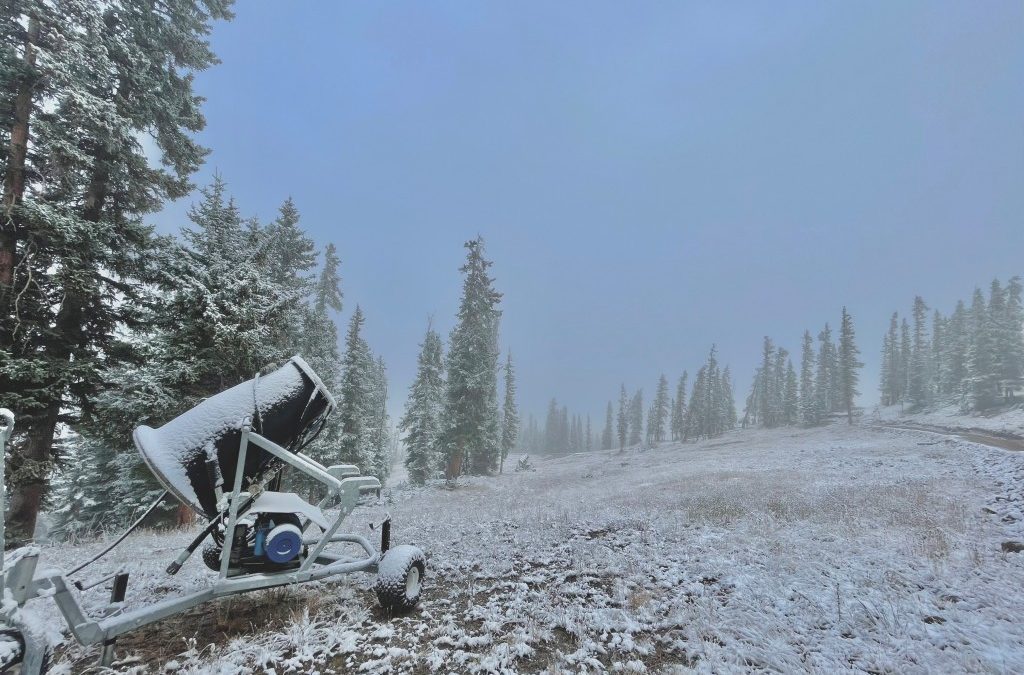 The arrival of October signals one thing for Colorado’s most passionate skiers and snowboarders: Three Front Range ski areas that vie annually for the distinction of being first to open for the season could begin snowmaking operations very soon.

At least that’s what history suggests. In 15 of the past 20 years, at least one of those areas — Arapahoe Basin, Loveland or Keystone — has opened during the second or third week of October, usually with a heavy reliance on manmade snow. Only once during that period has the first opening failed to come in October — Keystone won the race last year on Nov. 6 — and the previous year saw one of the earliest openings when Arapahoe Basin opened on Oct.11.

Even the most technologically advanced snowmaking system can’t make snow unless temperatures drop below freezing, though. October is likely to see above-average temperatures with average or slightly below-average precipitation, according to Kari Bowen, a forecaster for the National Weather Service in Boulder. That doesn’t necessarily mean they won’t be able to make snow, but a cold month doesn’t appear to be in the offing.

Beyond that, the weather service’s Climate Prediction Center says there is a 60% chance of above-normal temperatures for the northern and central mountains over the next three months with a 60% chance of below-normal precipitation.

Keystone’s state-of-the-art snowmaking system features snow guns with self-contained weather stations that can turn them on automatically when temperature and humidity are opportune for making snow efficiently and turn them off when conditions are out of that range. Keystone officials are hopeful the resort can open for skiing in October, as are counterparts at Arapahoe Basin and Loveland.

The rivalry to become the first Front Range area to open has taken some entertaining twists and turns over the past four decades. From the early 1980s through 2001, it was a duel between Keystone and Loveland. In 1992, when they both opened on the same day (Nov. 3), Loveland opened its lift 6 minutes early to get the jump on Keystone. In three of the next five years, they opened on the same day but Keystone used its advantage as the only resort with lighted slopes to open before sunrise and edge out Loveland.

The dynamic shifted again in 2019 when Keystone got back into the game in a big way, adding 53 automated snow guns with 11,000 feet of pipe and 15 miles of electrical cable. Each gun is essentially a weather station with computers and sensors that can turn on the guns when temperature and humidity are in the right range for productive snowmaking. And that’s an important equation. Snowmaking typically begins when the “wet bulb” temperature is 28 degrees, but that’s not the air temperature by itself. It’s a reading that takes into account temperature and humidity.

“Low humidity in the air helps with snowmaking,” said Bill Rock, executive vice president and chief operating officer for Vail Resorts’ Rocky Mountain region. “We can take advantage of those smaller, shorter, more marginal snowmaking windows because we have the automation. In the past, you would have had to send a couple of people on foot, down the trail, turning on each snow gun, and by the time you got them all on, maybe you would have had to go back and turn them all off again. You’d lose that window of production. In this case, we can do it relatively instantaneously. That helps the quality of the snow, it helps the efficiency and it helps us take advantage of those small windows, the marginal snowmaking temperatures. Early season typically is kind of marginal.”

The snow guns are ready to begin snowmaking at Arapahoe Basin, one of three Front Range areas likely to vie for the honor of first to open for the ski season. “Right now we are just waiting for it to get cold enough,” spokeswoman Katherine Fuller said on Thursday.(Katherine Fuller, Arapahoe Basin)

Snowmaking infrastructure isn’t only intended to get slopes open early, but it’s clear the battle is spirited among the Front Range areas to be first. And it should be noted that Wolf Creek in southern Colorado beat them all to the punch last year, opening Oct. 28.

“We know our Epic Pass-holders have a choice of where they want to ski, and we want to provide the longest ski season possible to our pass-holders,” Rock said, explaining the strategy behind the big snowmaking investment two years ago. “We thought Keystone was best positioned to open early, and you’ve got Breckenridge scheduled to stay open until Memorial Day. We wanted to have skiing and riding for almost eight months.”

It’s only a matter of time now as Keystone, Loveland and Arapahoe Basin wait for the conditions they need to blow snow.

“Nighttime temperatures are dropping into the low 30s at night, but we are also getting a lot of moisture, which is not ideal for making snow,” Loveland spokesman John Sellers said Thursday. “The snow guns are in place and the crew is on standby, so we are ready to go as soon as Mother Nature cooperates.”

When does ski season begin in Colorado?

The first Front Range ski area to open for the season, historical facts and figures over the past 10 years: