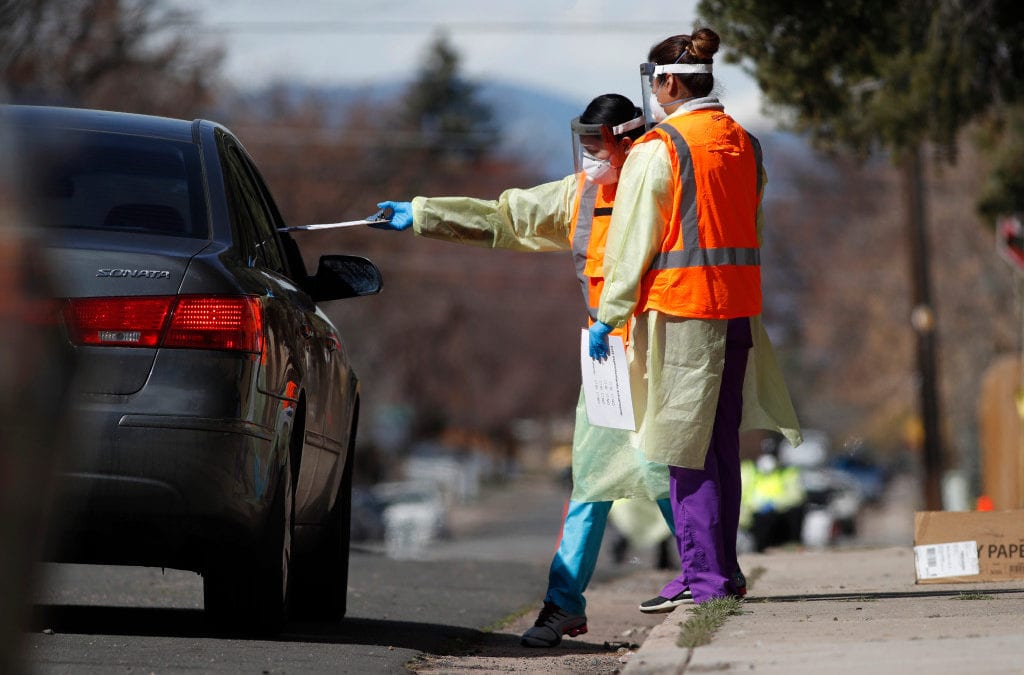 Gov. Jared Polis on Wednesday outlined how Colorado will ramp up its coronavirus testing as the state transitions away from a rigid stay-at-home order to the less restrictive second phase of coronavirus pandemic response.

It’s a complicated task with supply challenges and and other moving targets, Polis said.

“We’re building this car as we’re driving,” he said.

Widespread and readily available testing is a critical part of preventing a second wave of the novel coronavirus as restrictions ease in the state because it will allow officials to quickly identify people who are infected with the virus and then isolate those people before they can further spread the virus.

The goal, Polis said, is to identify outbreaks early so that each outbreak can be dealt with through quarantine and isolation — rather than asking the entire state to shut down.

Right now, the state is identifying about one-third of symptomatic COVID-19 patients within 48 hours, Polis said. That needs to increase by about 5% each week, he said. The state is focused on upping testing supplies, increasing the availability of testing statewide and increasing the state’s epidemiological capacity.

Colorado’s epidemiological team grew in the past two weeks to 56 people from 31, Polis said. And the team is expected to continue to grow.

Those epidemiologists are needed to track hot spots, trace contacts with positive cases and more, he said. Their work is crucial in identifying people who are sick and protecting vulnerable populations.

The state also conducted testing at four senior living facilities, he said. Of 1,171 tests, 99 people were positive for the virus, and 33 of those people were not experiencing symptoms.

While much of the rest of the state is beginning to transition out of the recent stay-at-home phase, many people older than 65 or otherwise at risk should remain at home for the time being, Polis said.

“We can’t wait until our senior friends can go back to bowling leagues and movie nights,” he said. “But that’s not in May.”

By May 15, Polis hopes to be able to test any symptomatic resident who wants to be tested, conduct wider outbreak testing and test asymptomatic people in high-risk situations such as those living in group homes.

As part of the effort to ramp up testing, Colorado is sending coronavirus testing supplies across the state in order to open 42 community sites.

The testing sites will be operated either by local public health agencies or community health providers, according to a Wednesday statement from the Colorado Department of Public Health and Environment. The public health department did not elaborate in a news release where those sites would be located.

The state will offer testing kits, personal protective equipment and technical assistance to the new local testing sites, which will be staffed and managed by locals.

State officials hope to establish testing sites in each of Colorado’s 64 counties, and plan to “gradually transition supply purchases back to the local level as supply chains restore,” according to the release.

It was not immediately clear Wednesday how many testing kits have been provided, where the 42 local sites will be located or when they will be operational.

In addition to the community testing sites, the state’s mass plan also includes helping private hospitals and healthcare facilities obtain testing supplies for staff, inpatients and some outpatients, and exploring other public-private partnerships to further expand the program, according to the release.

Many residents and businesses are eager for the state to reopen quickly, Polis acknowledged. But relaxing restrictions too soon could result in an untenable surge in the demand for hospital beds and other medical services.