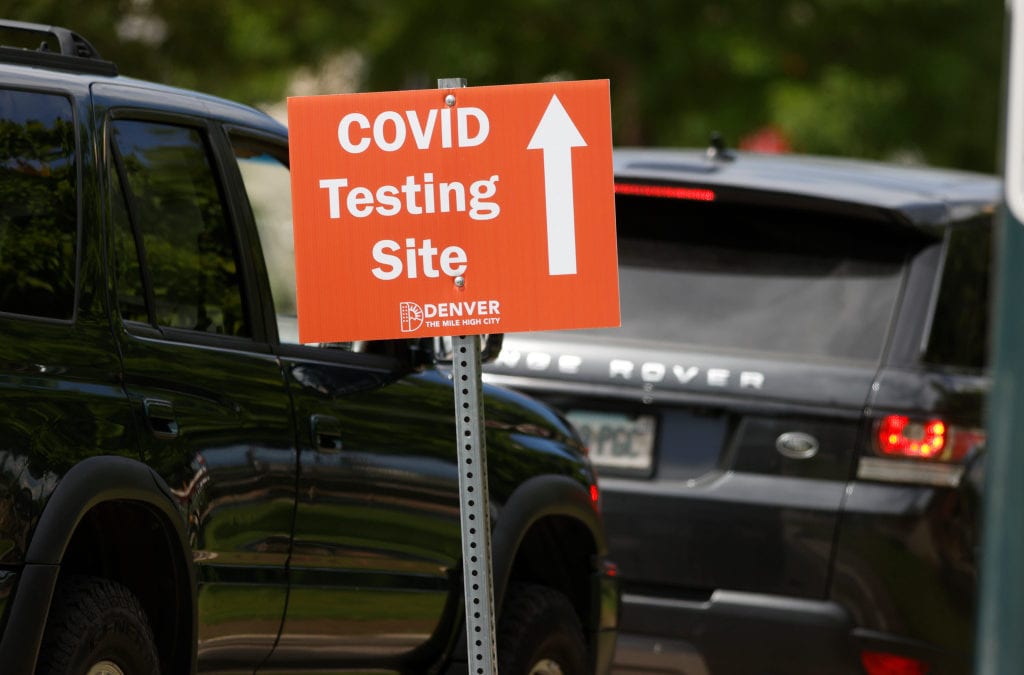 The number of new dcoronavirus cases in Colorado dropped 18% last week, marking the first week-over-week decline since confirmed infections began increasing in the state a month-and-a-half ago.

The state health department recorded 3,243 new COVID-19 cases between July 27 and Sunday, down from 3,961 cases the prior week.

The drop in new cases comes after Colorado saw infections rise for six consecutive weeks following a long decline, as more residents left their homes while the state reopened, which can increase the chances of exposure to the novel coronavirus.

Colorado also is seeing a decline in hospitalizations and the rate at which COVID-19 tests come back positive. The former is an indicator of the severity of the pandemic, while the latter provides insight into the transmission of the disease within the community.

Despite the decline in confirmed cases, last week’s total remains elevated and is on the same level as the week of July 13, when there were 3,299 newly confirmed cases. Before COVID-19 infections started increasing again, the state recorded just 1,135 new cases the week of June 8, according to data from the Colorado Department of Public Health and Environment.

Gov. Jared Polis last week said he thinks Colorado is starting to see the effects of the statewide order requiring individuals to wear masks when in public indoor spaces, along with his directives to close bars again and set the last call for alcohol at 10 p.m. for restaurants and other establishments that can stay open because they also serve food.

“We can certainly say we’re no longer seeing that same rate of increase that we saw several weeks ago,” the governor said during a briefing. “And we’re very hopeful that in the days ahead that these extra measures that Coloradans are taking to stay safe will pay off in terms of making all of our lives a little bit safer and allowing for more robust economic recovery.”

Hospitalizations, which increased in late June and in July, also continue their two-week decline. On Monday, the state’s hospitals were treating 209 people with COVID-19, which was down from 221 the previous day, according to the Colorado Hospital Association.

Following a long decline that started in late April, Colorado’s daily coronavirus hospitalizations began inching upward from a low of 126 in late June, peaking at 275 in late July — never approaching the mid-April high of 888.

The positivity rate for Colorado’s COIVD-19 tests, which began climbing again in early June and slid slightly above 5% in mid-July, also has dropped since that summer peak. As of the week of July 26, the number of tests coming back positive was 4.04%, according to the state health department.

The World Health Organization advises the rate of coronavirus tests coming back positive, which indicates how much the virus is spreading in a community, should be 5% or lower for at least two weeks before governments proceed with reopenings.

Nineteen more people were confirmed Monday to have died recently from COVID-19, bringing the number of people killed by the virus in Colorado to 1,710. Since March, a total of 1,844 people have died with the disease in their system, though not necessarily directly due to the virus, according to state health department.