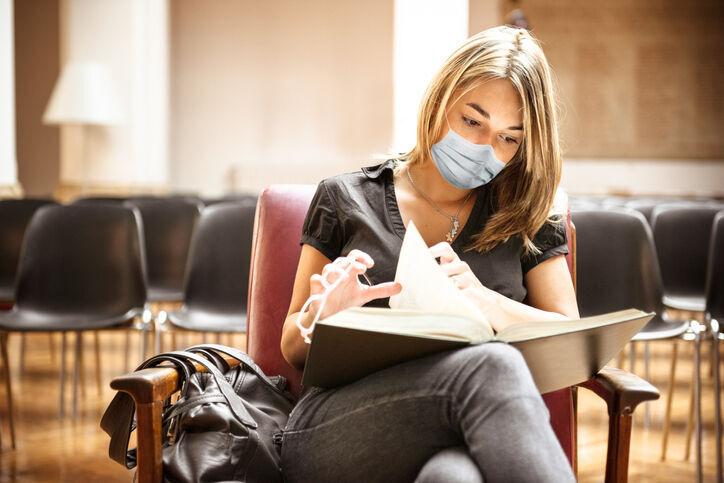 COVID outbreaks at Colorado K-12 schools nearly doubled in November, reflecting the challenge of keeping the virus at bay in classrooms when cases are surging in the community.

Colorado also saw an increase in school-based outbreaks that affected 10 or more people, logging 17 such cases in November, including one with 48 positive cases at a Denver religious school that was cited for failure to follow public health rules.

But outbreaks in schools are still much smaller than outbreaks in other settings where adults are in close proximity to each other, including jails, prisons, nursing homes, and food processing facilities. The median size of school outbreaks — from three to five people — has not changed significantly over the fall.

Public health experts cautioned that outbreak data provides a limited picture, but the relatively small number of people sickened in school outbreaks could mean the safety and quarantine protocols that Colorado had in place this fall were effective at limiting transmission.

“That would be an interpretation, that there are pretty strict guidelines around what schools have to do when they have ill children, so for the most part these are very small numbers of people,” said Lisa Miller, a professor of epidemiology at the Colorado School of Public Health.

Both the increase in outbreaks and their limited size carry implications for efforts to reopen schools. Many school districts that have switched to remote learning would like to bring students back in January, when case rates are likely to still be high after the Christmas holiday.

At the same time, limited data makes it hard to draw firm conclusions — good or bad — about the safety of school when community rates are high.

From mid-August through October, Colorado reported 91 outbreaks at K-12 schools. There were 179 K-12 outbreaks in November alone. At this point, more than 10% of the state’s 2,300 public and private schools have had at least one outbreak.

Outbreaks don’t necessarily mean a large number of people were infected at a location — and not all clusters of cases are confirmed to be outbreaks. Outbreaks represent the possibility of transmission that may have occurred already or would be likely to occur without swift intervention.

The growth in school-based outbreaks comes as Colorado has seen a surge of COVID cases. In late August, when the school year started, Colorado was averaging a little more than 300 cases a day. By Nov. 1, it had grown to 2,100 cases a day, and by the middle of the month, it had risen to more than 4,000 cases a day, where it remains. Test positivity also rose above 12%.

A Chalkbeat analysis found that K-12 schools account for 14% of outbreaks but only 5% of cases from outbreaks. That’s still roughly 1,500 people, about one-third of them school staff and the rest of them students. Meanwhile, colleges and universities represent only 2% of outbreaks but 16% of cases.

“Outbreaks and cases of COVID-19 in schools have increased and that increase is similar to what we are seeing within the community,” a spokesperson for the Colorado Department of Public Health and Environment said in an email. “Making schools as safe as possible requires multiple strategies, including keeping those who are ill at home, practicing distancing, masking, and responding to cases and outbreaks quickly.”

The department declined to make anyone available for an interview.

Miller urged caution in interpreting outbreak data. Which facilities end up on the outbreak list is influenced by reporting practices and contact tracing capacity and doesn’t necessarily reflect all locations where outbreaks have occurred.

And Colorado is missing a significant piece of information.

“What you’re missing when you look at the outbreak data is the denominator: How many kids are in school? That number changes every week,” she said.

While the Colorado Department of Education tries to keep track of school plans based on their websites and local media accounts, there is not any central tracking of how many children are in school, out on quarantine, or otherwise in remote learning in any given week.

Colorado is one of at least 15 states releasing data on outbreaks in schools, according to a tally by NBC News. In a school, outbreaks are defined as two or more cases in a two-week period among people in the same cohort or classroom, or in the school if students aren’t kept in separate groups. If 5% of students and staff in a school test positive, that would also be considered an outbreak.

Cohorts are groups of students and staff who interact only with each other, and it’s one of the strategies state officials suggest schools use to contain COVID. But many districts have struggled to create small cohorts, especially at the secondary level. Larger groups lead to larger quarantines and in some cases larger outbreaks.

“The largest pattern that we observe is the larger the cohort or more importantly, the more cohorts an individual student is a part of, the larger the outbreak,” Ashley Richter, communicable disease epidemiology manager for Tri-County Health Department, said in an email. Nothing eliminates risk, she added, but following safety protocols can reduce it and reduce the size of an outbreak if one occurs.

While the median size of school-based outbreaks remained fairly consistent through the fall, the number of larger outbreaks also increased in November. From August to October, 19 K-12 outbreaks involved 10 or more people, while there were another 17 in November alone. Three large high schools in the Poudre School District had outbreaks that affected 20 people or more.

A spokesperson said the Poudre School District works closely with the Larimer County Public Health Department and believes some school-linked outbreaks started with community gatherings, including at least one Halloween party.

“Although we have evidence of a couple instances of in-school, student-to-student or student-to-teacher spread, most of the cases we have seen have been linked to a positive family member or sibling, a weekend get-together, a playdate with friends, or a student or staff member who presented with symptoms during the school day,” district spokeswoman Madeline Noblett wrote in an email.

The largest K-12 outbreak in Colorado has been at Yeshiva Toras Chaim, a religious school in west Denver. So far, 41 students and seven staff members have tested positive. Tammy Vigil, a spokeswoman for the Denver Department of Public Health and Environment, said a number of factors contributed to the large number of positive cases, including that the yeshiva has a boarding school.

City public health officials found several concerning practices, she said, including that school administrators did not notify anyone until they already had several cases, students continued to mix rather than strictly quarantine, and the school did not conduct daily symptom screening. The school was cited on suspicion of failure to follow a public health order. A call to the yeshiva was not returned.

“Observed multiple in-person activities occurring during the site visit,” an investigator wrote in the notice of violation, “including students communally dining with no social distancing … Within the positive student cohort, investigator noted that approximately 15 to 20 students would freely enter/exit their living quarters. Approximately 10 of these students would then congregate near the investigators throughout the inspection.”

Benjamin Linas, an associate professor of medicine and epidemiology at Boston University, said those limitations make it hard to know how risks in school stack up against risks in the community.

Linas has supported school reopenings as relatively safe, and he sees growing evidence that that remains true even at high rates of community transmission — a separate question, he stresses, than whether schools can manage the logistical challenges. But there may be an upper limit, a level where school becomes less safe. Without good data, it’s hard to know where that is or which safety practices do the most to protect teachers and students, he said.

“The idea that we can stay the course through this depends on having the data to know that it’s safe,” said. “Otherwise you’re flying blind through a pandemic, and that’s not where you want to be.”

Chalkbeat is a nonprofit covering education in the U.S.