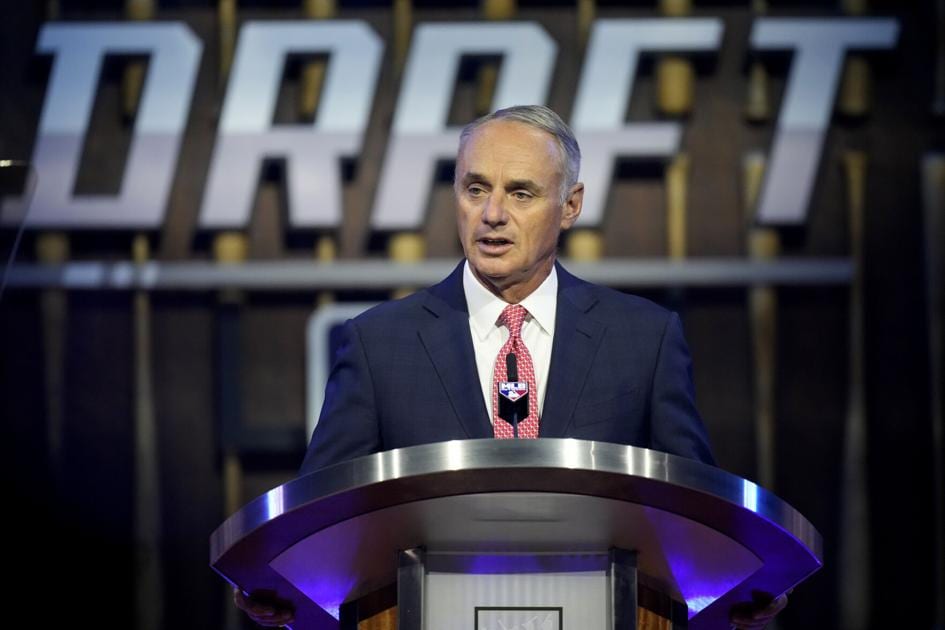 To become a top pick in the MLB draft, Benny Montgomery traveled from his hometown of Lewisberry, Pa., to Chellsie, Ala., to take hitting lessons with coach Casey Smith.

He had scouts already watching him. But his swing needed work, especially anchoring his legs in the ground and connecting his upper body to his lower body, as well as controlling his swing.

He made the adjustments and went on to hit .417 in his senior season at Red Land High School. The Rockies, who have been watching him for over a year, liked the improvements he made. On Sunday, they selected him with the eighth overall pick in the MLB Draft.

“Unbelievable,” said Montgomery, who heard his name get called surrounded by over 75 family members and friends. “So much hard work from my family, my coaches, me to get to this moment. It’s a dream come true. I’m so happy to be a Rockie.”

Primarily a center fielder, Montgomery is 6 foot 4 inches and almost 200 pounds. He possesses both speed and raw power that the Rockies will hope to develop even further. Stealing bases is one of his favorite parts of the game, he said, and the Rockies clocked him at 6.30 in the 60 at multiple showcases. He won the Perfect Game home run derby last summer, something he called a highlight of his summer break.

“I think the power will only keep coming and coming,” he said. “I’ll be hitting balls out of Coors Field in a few years.”

Montgomery’s agent and advisor connected him with Casey, and he took his first trip there last October. His most recently traveled down a few weeks ago to get last-minute adjustments in before the draft. Casey has worked with multiple major leaguers, including DJ Lemahieu and Nick Castellanos. Montgomery spent two nights in the south each time, getting in two sessions with Casey before he had to travel back north.

“I credit him with a lot about how I’ve developed as a baseball player,” Montgomery said. “He’s been so ridiculously good for me.”

The Rockies had been keeping in an eye on Montgomery — in Alabama and Georgia last summer at showcases last summer, back in his hometown in the spring and at the combine earlier this summer. The refinement of his swing made him an even attractive draft pick, but interim general manager Bill Schmidt said his defensive abilities also stood out.

“The strength and speed combination is something that’s hard to find,” Schmidt said. “We think going forward he has a chance to be a very productive outfielder for the Colorado Rockies.”

The draft was held in July in conjunction with the All-Star festivities for the first time in league history. It was held at Denver’s Bellco Theater, instead of the MLB Network studios like in the past.