Colorado River water woes are real — But not climate | CFACT 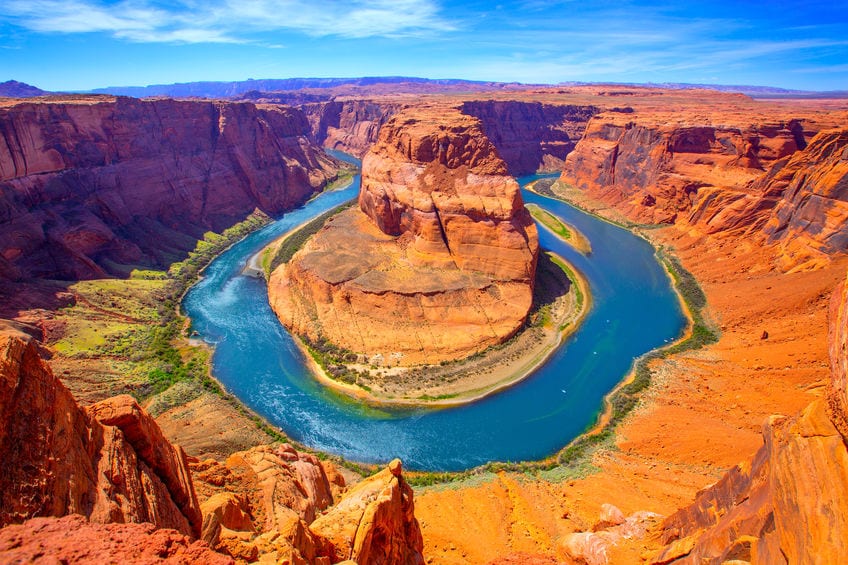 Unless greenhouse-gas emissions are drastically reduced, the already shrinking Colorado River could shrink another 31% by 2050, two scientists with the U.S. Geological Survey (USGS) warned in a recent study published in the online journal Science.

The study, “Colorado River Flow Dwindles as Warming-Driven as Loss of Reflective Snow Energizes Evaporation,” was written by P.C.D. Milly and K.A. Dunne. It appeared in Science on Feb. 20, 2020.

In the arid and semi-arid West, water has always been a prized commodity. As the region’s population has grown, so too has the demand for water. Deciding who gets how much of this scarce resource has marked water-management disputes in the West since the late 19th century. Snowfall rates along the course of the Colorado can vary greatly from year to year, leaving the 40 million people it serves in over how much water will flow down the river. In other words, dealing with the mighty Colorado, the river that cuts through the Grand Canyon, has always been a challenge.

Using computer simulations of the Colorado River Basin, the two USGS researchers determined that, on average, a regional temperature increase of 1.4 degrees Celsius over the last century reduced the annual amount of water flowing through the West’s largest river by more than 11%. To forecast the river’s future, the two researchers combined their simulations with climate models (yes, those) that predict temperature increases under purely hypothetical greenhouse-gas emissions scenarios.

In other words, all we have to do is curb atmospheric levels of carbon dioxide by reducing our use of fossil fuels, and the Colorado River will live happily ever after. Or so their argument goes.

Evapotranspiration and an Unwelcome Intruder

” Writing in the American Spectator (May 21), Greg Wachler points out that “evapotranspiration has robbed the river of vast quantities of water because public land managers have allowed forests to grow unnaturally clogged with too many trees – the same bad management that caused 100 million acres of catastrophic fires in the last 20 years.”

“Water evaporates from the trees before ever hitting the ground, much less the river,” he explains. “The Bureau of Reclamation has estimated that the Colorado River loses almost four million acre feet per year from evapotranspiration …” Wachler is president of the Natural Resources Group and is the former head of the Colorado Department of Natural Resources.

In addition to overgrowth of forests managed, or mismanaged, by federal agencies, the Colorado has another tormentor: Tamarisk, an invasive and non-native species. A deciduous shrub or small tree, tamarisk (also known as salt cedar) originated in Eurasia. Tamarisk has taken root in almost half the river systems in the U.S. and is causing trouble everywhere it spreads.

“Tamarisk is among nature’s thirstiest plants, lowering water tables and drying up springs, wetlands, and riparian areas. One tree can drink more than 200 gallons of water per day, and they often grow in stands of up to 3,000 trees per acre,” Wachler says. “Tamarisk now covers nearly two million acres of river banks.”

Given what is known about the thirsty non-native species, Wachler calculates that the approximately 6 billion tamarisk trees nationwide consume an astounding 1.2 trillion gallons of water a day. “If replaced by the native cottonwood and willow vegetation (which in their natural density consume less than a fourth of the water), 75 percent of the water would remain in the rivers – nearly a trillion gallons per day,” he says.

Private Conservation to the Rescue

The harm wrought by the tamarisk has been known for decades, but the agencies responsible for managing the millions of acres of federal land in the West have done little to address the problem. Of necessity, that task has fallen to practitioners of private conservation, most notably Grand Junction, CO-based non-profit RiversEdge West (formerly the Tamarisk Coalition). But with an annual budget of under $4 million, RiversEdge West can restore less than 2,000 acres of river bank a year. Still, Wachler notes, that far surpasses what they feds have done.

Our sad experience with the lockdown in the wake of the COVID-19 pandemic is a grim reminder of how public policy based on dubious models can go astray. This is true whether the models deal with the climate or with a virus.