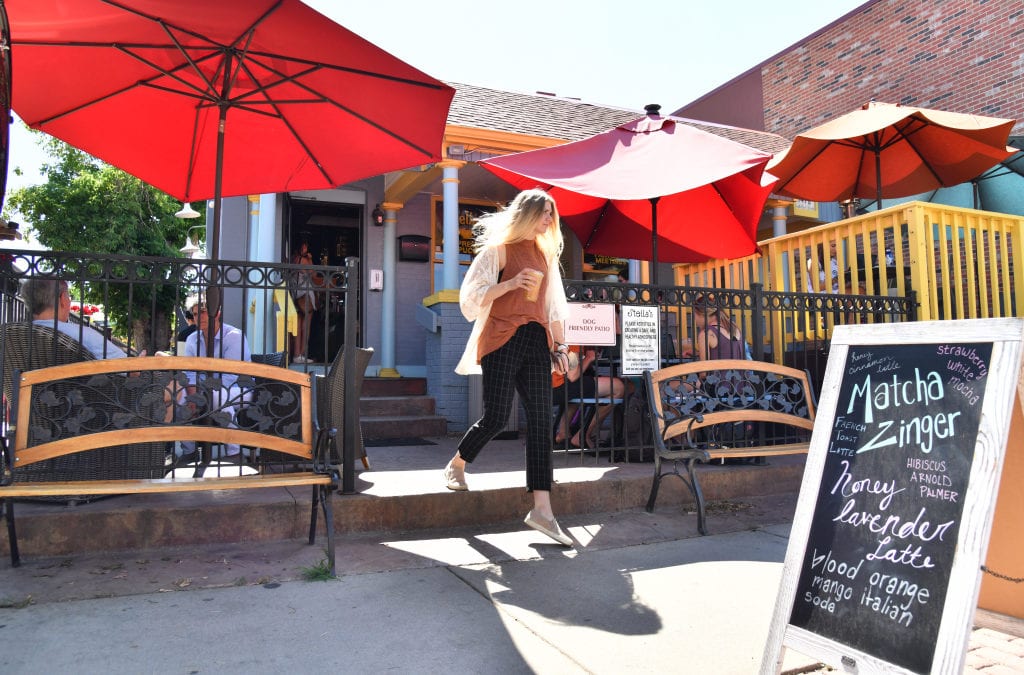 As the country emerges from COVID-19-related restrictions and tries to regain its economic footing, people have wondered if brick-and-mortar retail will bounce back or permanently lose ground to online shopping. But metro retailers say they’re getting back to business as usual and national trade organizations and analysts generally back them up.

Business people say foot traffic is up, sales are rising and more shoppers are out since coronavirus cases have declined and more people have been vaccinated.

“I like to say the death of bricks-and-mortar retail has been highly exaggerated,” said Nick LeMasters, president and CEO of the Cherry Creek North Business Improvement District. The upscale area has about 260 retail businesses, roughly 150 of which are locally owned, across the street from Denver’s Cherry Creek Shopping Center.

“Cherry Creek North has seen over 20 stores opening in the first half of 2021, which is an extraordinary number. That’s about as many as we would see in a typical full year,” LeMasters said. “These are brand new stores, not reopenings.”

While not disclosing specific numbers, Pamela Schenck-Kelly, senior general manager at Park Meadows, said business at the mall in Lone Tree is at 85% of what it was in 2019 when it reported its best sales ever. And what about speculation that the pandemic has accelerated a shift to online shopping?

“My take on that is there’s going to be a roaring ’20s in brick-and-mortar,” Schenck-Kelly said of the next few years.

The organization expects online shopping to stay above pre-pandemic levels, but to moderate from 2020 levels. In 2019, “non-store” retail sales accounted for 20% of the total and rose to 23% in 2020.

At the height of the pandemic, buying online was convenient and safe, Jack Kleinhenz, chief economist at the retail organization, said in an email. However, he said many people went to stores to pick up their online orders. Indications are that shoppers are returning to in-person buying.

“Bottom line, the brick-and-mortar stores are not going away, but what and how they sell will likely be different,” Kleinhenz said.

Second Star to the Right Children’s Bookstore on South Pearl Street in Denver is pictured on Tuesday, June 15, 2021.

The experience at Gracie’s Boutique in the shopping district along South Pearl Street in Denver mirrored Kleinhenz’ observation about people picking up their online orders in stores. Owner Susan Hamilton took orders over Instagram, but customers still visited the store, said Sydney Aulds, the manager.

“They still want to try it on and usually end up shopping more,” Aulds said. “I think they just like the experience of being back in the store.”

Mark Gill, president of the South Pearl Street Association, said the shopping district that starts at Buchtel Boulevard is home to about 100 businesses. And business is back, he said.

“On a Friday night, and probably Thursday or Saturday, for that matter, you cannot get a seat at a restaurant without a reservation or a long wait,” Gill said.

The farmers market held Sundays on South Pearl “took a little bit of a downturn last year,” Gill said, because of restrictions on the number of people allowed. In early June, with restrictions lifted, the market had its best day ever.

And while many of the stores on Pearl looked for ways to keep going, including e-commerce, Gill said people missed being out about.

“I think the retail, especially the type of retail around here, locally owned retail, was really missed,” Gill said. “I think there’s been pent-up demand and people are really coming back to that.”

The experience is what Ashley Hagerty of Highlands Ranch was enjoying during a recent trip to Park Meadows.

“It’s the first time I’ve been shopping in quite a while,” Hagerty said.

Hagerty said she and her mother-in-law, Mary Hagerty of St. Louis, who was with her, are both fully vaccinated and felt comfortable going out into public. Hagerty did a lot of online shopping during the pandemic and was ready to venture out and explore.

Schenck-Kelly said she’s thankful to e-commerce companies because they offered ways during the toughest times of the pandemic for retailers to stay productive. She noted that Amazon has two stores in Park Meadows.

Before the pandemic, retailers were looking at incorporating more digital commerce, but the closures and restrictions pushed them toward faster integration, said John Talbott, director of the Center for Research and Education in Retailing at the Indiana University Kelley School of Business.

“I think the post-COVID world is one where we’re going to see well capitalized, larger retailers invest in their stores and in their digital engagement and try to make sure that the two play well together,” Talbott said.

TrueCare 24 Administrative assistant Renee Lazar, right, helps Gepthe Raymundo, with his son Santiago, 2, through the process of getting the first dose of the Moderna COVID-19 vaccine at an SEIU 105 vaccination clinic in Denver on May 3, 2021. Company’s are taking a proactive approach on helping to get their employees vaccinated and forming policies around the vaccine. Members of SEIU Local 105, a union representing janitorial workers, were given the opportunity to get the vaccine making it easier for older people or those with language barriers to get the shot. The union had translators on staff to help translate for those that could not speak english.

“Rip the Band-Aid off”

If the pandemic speeded up existing trends, such as businesses going more digital, it also amplified existing disparities and highlighted gaps in the system, said Mike Ferrufino, president and CEO of the Colorado Hispanic Chamber of Commerce.

The coronavirus outbreak has disproportionately affected low-wage workers and people of color, many of whom are in jobs that can’t be done remotely, leaving them more exposed to COVID-19. The unemployment rates among Blacks and Hispanics were higher than for whites heading into the pandemic and remain higher. In May, the overall unemployment rate was 5.1% for whites, 7.3% for Hispanics, 9.1% for Blacks and 5.5% for Asians.

“We saw COVID-19 rip the Band-Aid off every existing disparity and amplify them about a hundred times,” Ferrufino said.

The rate of infection and deaths among the Hispanic community have been high and the vaccination rates are lower than for other communities. In Denver, where Hispanics are about 30% of the population, they account for nearly 47% of the COVID-19 cases and 30.5% of the deaths, according to Denver Public Health.

Hispanics make up about 21% of Colorado’s population.

Ferrufino said the chamber of commerce and other organizations are working with state and local governments to increase vaccinations and provide resources while stressing that the community is widely diverse with different needs.

On the economic front, the pandemic has created challenges for the roughly 50% of Hispanics who don’t have a relationship with a bank, making it tough to access COVID-19 relief money. And yet, Hispanic-owned businesses are among some of the fastest growing and analyses show the country’s 62.5 million Hispanics represent about $1.7 trillion in buying power, Ferrufino said.

Lindsay Salazar, the owner of Tigre Radio, a Spanish station based in Greeley, has worked hard to keep the lights on during the pandemic. She developed a plan with her bankers and applied for and got a Paycheck Protection Program loan.

“Within the first six weeks of the pandemic, we lost about maybe 40 to 50% of our revenue. It was crazy. The phone was nonstop ringing: cancellation, cancellation, cancellation,” Salazar said. “We had to create new marketing packages for our small-business owners so they could afford to keep advertising. We know that’s important for them as well as for us.”

Salazar, whose father started the station in 1997, has seen some Hispanic-owned businesses close, including mom-and-pop car dealerships, and some scale back. She hasn’t seen any storefronts close.

But Salazar, like Ferrufino, worries about the low vaccination rates among Hispanics. She has talked to health officials about not requiring people to register for shots or go online. She said not everyone has access to the internet and those who are undocumented fear being deported.

Also during the pandemic, Tony Jordan has seen business increase. He is general manager at State & Liberty, a men’s clothing store in Cherry Creek North. He moved to Denver in March 2020 to work as a stylist at Nordstrom and eventually took over at State & Liberty.

Since State & Liberty moved around the corner to a new site, traffic has shot up about 2.5 times, Jordan said. He said people are eager for the social experience of in-person shopping.

At the same time, Jordan, like many other employers, is struggling to find workers. Jordan said the company pays “many dollars” above Denver’s minimum wage, but people often don’t want to work certain hours or days.

“I’m actually hiring you for the time that you’re telling me you want to be gone,” said Jordan, recounting some of the conversations.

Openings, particularly in the restaurant and hospitality industries, have gone unfilled even though 9.3 million Americans were unemployed in May. Fear of catching COVID-19, a lack of child care and a desire for better jobs have been offered as reasons.

Schenck-Kelly at Park Meadows is among those who said the temporary $300 weekly federal unemployment benefit on top of state benefits is a big factor. She said employers are offering hiring bonuses and higher pay to attract workers. It will be catastrophic if the federal benefits are extended, she said.

Talbott at Indiana University acknowledges the challenges retailers face in filling jobs. However, he doesn’t blame unemployment benefits. He said people have moved on or are looking for new jobs that pay better and don’t involve working nights, strange shifts or unruly people.

“I think companies are being compelled to pay people something that they can feed a family on,” he said.