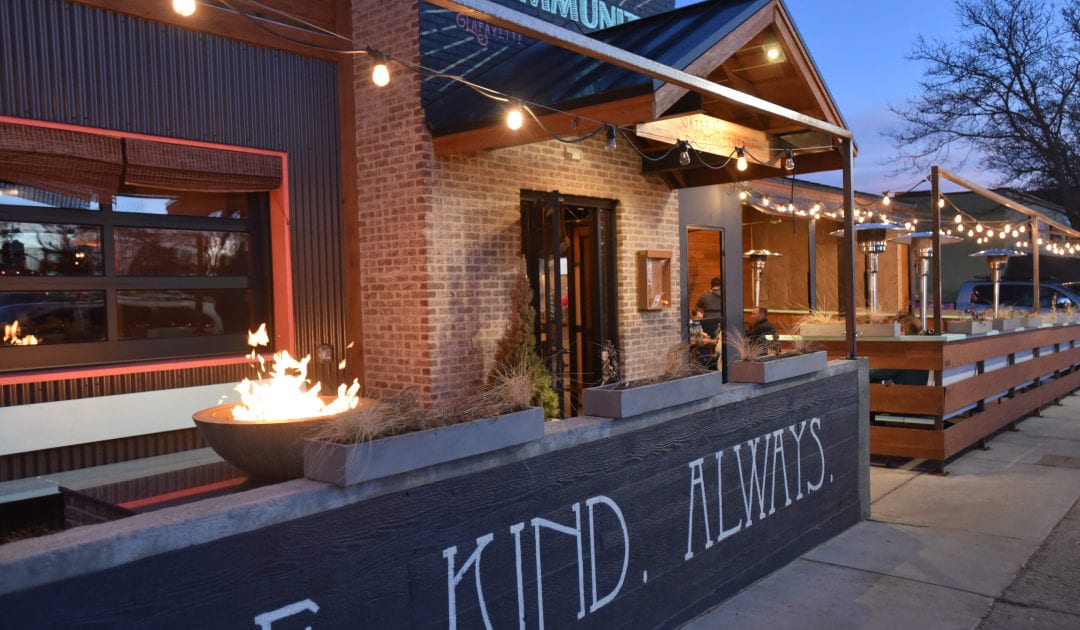 Palenque Cocina y Agaveria has tried its best to withstand the coronavirus, serving margaritas in a garden patio and carrying smoky bowls of molcajete to its breezy rooftop overlooking downtown Littleton.

Owner Brian Rossi shut down for one week as the first wave of illness hit Colorado, then reopened during the long spring quarantine for takeout only. He closed for 10 days this fall when 12 employees were sick with COVID-19. And in between, Rossi received a federal, forgivable loan so he could keep his staff of 75 on the payroll.

But as new coronavirus restrictions take effect Friday for Arapahoe County and 14 others, forcing restaurants once again to end indoor dining, Rossi isn’t sure how much more his independent restaurant can take.

Rossi will cut his staff to about 12, focus on take-out, and not bother keeping the restaurant rooftop open for the handful of people brave enough to eat outside as the weather turns cold.

“Now we are playing the game of how do we lose the least amount of money?” Rossi said. “Making money is not even in the vocabulary anymore.”

As Denver and its suburbs, plus rural and mountain counties including Routt, Summit and Logan, move into the red-alert level of coronavirus restrictions, restaurants and other businesses are worried this is the final blow.

The new restrictions announced this week by Gov. Jared Polis are an attempt to stave off a full-scale lockdown, one in which businesses deemed non-essential would have to shutter and people would have to stay home. As coronavirus cases and hospitalizations skyrocket, the governor created a new, pre-lockdown level that bans gatherings, indoor events and indoor dining at restaurants. It prohibits alcohol sales at bars and restaurants after 8 p.m. and reduces gym capacity to 10%.

Rossi, who opened Palenque two years ago after several years running Mexican and Italian restaurants, said he understands the need for restrictions. “We always want to be part of the solution and not the problem,” he said. “We’ve followed every protocol to a T and we’ve witnessed firsthand that this thing can spread very easily.

“That being said, I wish our government would pull it together and realize we need help or there are not going to be any independent businesses out there.”

On Tuesday afternoon, the Colorado Restaurant Association sent out three alerts to members after the governor announced the new COVID-19 restrictions.

The last message included a link to a letter sent to Polis straight up demanding that he “do everything within your power to avoid shutting down restaurants or placing further restrictions upon them.”

Sonia Riggs, the restaurant association’s CEO, said it was unfair to target restaurants. State health leaders have said recent spikes in coronavirus cases are linked to private gatherings, but so far, the public data on this question is sparse.

“We believe the restaurant industry is bearing the brunt of this pandemic when it seems increasingly clear that they’re not the main culprit of spread,” Riggs said in an email. “… In some sense, then, these measures could actually be counterproductive – restaurants appear to be a safer place to be, and closing them just forces more people into homes.”

In Colorado, restaurant and food service workers make up 10% of the state’s workforce and have been the hardest hit industry for unemployment. According to the state Department of Labor and Employment, the “restaurant and other eating places” category has had the highest rate of new unemployment claims every week since mid-March except one.

And according to the association’s recent survey, restaurants are operating at just one-third the staff size of a year ago. Sales for 91% of restaurants were down, with 75% saying they will have to consider shutting down within six months at 25% indoor capacity. Shut indoor dining entirely and 24% said they would shut down in a month.

“If we want our restaurants to survive, they need significant cash help,” Riggs added, requesting that the state and local governments support restaurants with not just grants and loans, but also rent and mortgage assistance and reduced regulatory costs. “And we ask the public to avoid private gatherings, to wear masks, and to wash hands to get these numbers down as quickly as possible so we can reopen.”

The restaurant industry promoted several programs to help its members. Last month, CRA hosted an Outdoor Winter Design Workshop with architects and engineering firms to come up with ideas for outdoor eating in the winter. It’s also offering $10,000 grants for restaurants that want to winterize their outdoor areas.

That won’t help restaurants like Beau Jo’s in Idaho Springs. It’s had a patio and pledged to keep it open all winter. With the loss of indoor dining, the restaurant will only have patio seating and to-go orders. It doesn’t offer delivery.

The months-long situation has caused restaurants to think differently about how to serve customers during a pandemic, said Robert Bogatin, director of Resilient Restaurants of Colorado, an organization aimed at developing sustainable restaurant practices.

“Back in June, nobody expected this to last this long,” he said. “All the summer innovation and creativity that people did to open up new business channels, I think it’s just going to be accelerated and people are going to lean into more creative ways to engage the takeout and delivery scene.”

Restaurants may not sell toilet paper and hand sanitizer to customers as they did in the spring, but some have added new revenue streams. Somebody People, a restaurant on South Broadway in Denver, sells subscription grocery boxes stocked with fresh organic produce.

“I was visiting them a few weeks ago and one of their customers came in to pick up their weekly box of produce,” Bogatin said. “I thought for sure that she lived in the neighborhood, and she’s like, ‘No, I live 20 minutes away from here. I come here to get this food.’ That was amazing that they have that direct value with their customers.”

Bob Starekow, owner of Silverheels Bar & Grill and Kemosabe Sushi & Sake in Frisco, invested in an ionization air purification system for the building’s HVAC units. It purchased atomizers to sanitize the kitchen, bar and service stations. The tables are socially distant and reservations are staggered. The two restaurants reopened Friday after building a convertible outdoor dining space that can be opened on warmer winter days.

“None of that figures into the calculation,” said Starekow, who just hired his winter staff and now fears he’ll have to let most of them go. “When they close us down, whether we spent extra money or simply complied with existing orders or, in some cases, didn’t comply at all, this affects us all equally. It’s frustrating as hell.”

He wishes the step down in indoor occupancy was more gradual — instead of going to zero from 25% — and took into account safety measures made by individual restaurants. Summit County joins the Denver metro-area counties in moving to the red zone at 5 p.m. on Friday.

And while he encourages all consumers to start ordering to-go meals from locally owned restaurants, he had another request: Get tested.

“If they get tested, we can get our positivity rate down, then they’re going to put us back in business again,” Starekow said. “That and the fact that not knowing for sure whether restaurant operations are specifically causing specific outbreaks. It’s so painful taking the fall for everybody else.”

“Small businesses are a top priority,” the Denver Democrat said. “They are getting hit hard. We’re trying to make sure that they feel some tax relief and they are eligible for direct assistance to get them through these winter months where they are really up against the wall.”

The tax relief will likely come in the form of a delay on tax payments. The direct assistance plans are still being ironed out, he said.

Short notice on the new restrictions

One again during this pandemic, new rules announced only days ahead of time have left businesses of all kinds scrambling.

At Zone Athletic Clubs, general managers were meeting Wednesday to figure out how to adjust to the next phase of restrictions — mainly, how to reduce capacity to 10% from 25%. The gyms, with several locations across the Front Range, already do “mask checks” every two to three minutes, sending staff to walk through the facility to make sure everyone — no matter whether they are huffing on a treadmill or lifting weights — is wearing a mask, said Brian McGoogles, general manager in Aurora.

The equipment is socially distanced, and the front desk keeps track of everyone who enters to make sure capacity is not exceeded, he said.

“Right now everything is still up in the air,” McGoogles said. “We just learned about this last night.”

The Aurora gym has done well financially this year, a sign that people recognize that fitness is part of mental and physical well-being, especially during a health crisis, he said. Under past capacity restrictions, the gym hasn’t had to stop anyone from entering.

At Community, an “elevated” comfort-food restaurant in Lafayette that serves up short ribs and shrimp and grits, managers were reworking the whole menu before switching to mostly takeout Friday. The restaurant is scrapping brunch for now, because benedicts and avocado toast with poached eggs don’t travel well.

The uncovered patio will remain open, but Community doesn’t expect many people will want to sit outside as Colorado edges toward winter. The restaurant plans to lay off its six servers and three hosts, but keep its cooks, said Anastasia D., a manager who goes by a last initial.

While the financial struggle is tough, logistically, “it’s a little bit easier to do this a second time around because we kind of know how it goes already,” she said. “It’s expected. We were preparing for this mentally and emotionally.”