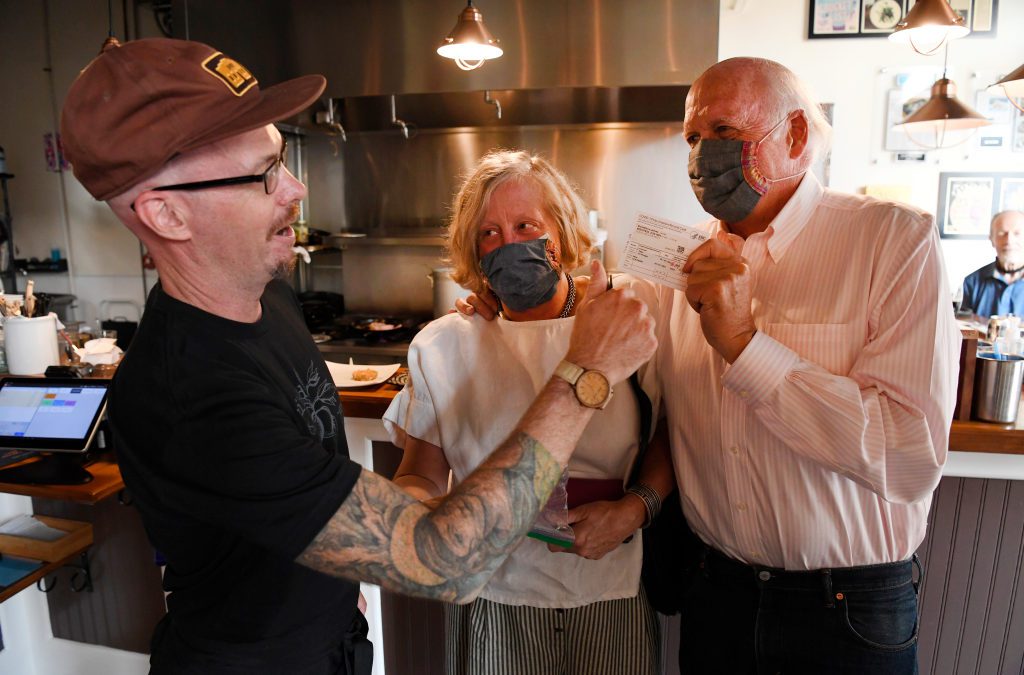 As concern grows in Colorado over the spread of the coronavirus’s delta variant, a number of metro Denver hospitality businesses have begun requiring proof of vaccination from patrons seeking entry into dining rooms, bars and concert halls.

But for now, at least, there doesn’t seem to be a groundswell of support among Denver restaurateurs for such measures as many watch and wait for government guidance or backing.

“It comes down to this,” said Dakota Soifer, owner of Boulder’s Café Aion, which will begin requiring proof of vaccination next week. “We know dining indoors is risky, and it’s more so than dining outdoors. So this is a pretty darn easy way to make it safer. Rather than being shut down for dining in, to me this makes a whole lot more sense.”

Soifer and the small cadre of Front Range business owners who are implementing their own vaccine requirements join establishments in cities such as Seattle, San Fransisco and New Orleans, where a growing number of restaurants and bars are requiring vaccination for entry.

New York was the first city in the nation this week to institutionalize a proof-of-vaccination policy, and Los Angeles is considering a similar measure that would require patrons of restaurants, gyms and indoor sporting events to demonstrate they’ve been inoculated.

As of Wednesday, Denver had no plans to issue specific guidance for businesses pursuing or considering a vaccine mandate.

“Like with those businesses that may still require masks be worn if they feel it appropriate to keep their employees and customers safe and healthy, Mayor (Michael) Hancock supports those businesses in their choice to require vaccinations for entry,” said Michael Strott, Denver’s deputy communications director.

Café Aion will require vaccinations in order to dine inside starting Wednesday.

“We’re not trying to act as gatekeepers,” Soifer said of his and other like-minded restaurants. “We’re just doing our part to keep people safe and try to avoid business loss while keeping people out of hospitals. The more institutions that can all be on the same page with this, the better it’s going to work.”

Also in Boulder, both the Fox Theatre and Boulder Theater will require proof of vaccine or a recent negative COVID-19 test to attend shows starting Saturday. Same for the Aggie Theatre in Fort Collins.

“After watching transmission and hospitalization rates steadily increase, we have to do what is in our control to help reverse this disturbing trend and avert reinstating social distancing,” Liguori said. “It is not sustainable for indoor music venues to operate at 10% of their capacity, so why not be proactive and ask the public to do something that is very simple: bring a photo of your (vaccination) card, get tested, or get a refund.”

The Oriental Theater in Denver is requiring vaccines on an event-specific basis at the request of performers, while Cervantes’ Masterpiece Ballroom has implemented a vaccine requirement (or negative test) for all performances.

Protocol at the other vaccine-requiring venues is almost identical.

Denver restaurant To the Wind has been offering a vaccinated-guests-only night on Wednesdays as a trial this summer, and nearby on East Colfax Avenue, Bar Max has required proof of vaccination for entry since March.

“My original reasoning was always that we had been waiting for vaccines (in order) to reopen,” said Marshall Smith, Bar Max owner. “The whole idea was to flatten the curve for hospitalizations, so that medical treatment could be given effectively to everyone who needed it.”

For the 15-seat To the Wind Bistro, the “vaccination-only night” for high-risk and otherwise concerned diners has been a boon for business on what would otherwise be a slow night.

“The first week we tried it was a dud, the second week was awesome and by the third week, our numbers were as good as (weekend nights),” owner Royce Oliveira said. “Even people coming on Thursday and Friday nights now say they’re appreciative of it.”

Back in March, Smith decided for his own business’ reopening that vaccines were the logical answer. Now he feels vindicated as more public-facing institutions join in the effort.

Denver on Monday announced that it would require government employees, as well as school and health care workers, to be vaccinated by the end of September. And Gov. Jared Polis this week emphasized the urgency for all eligible Coloradans to be vaccinated, and ordered state employees who aren’t vaccinated to undergo regular COVID-19 testing.

Chef/owner of To the Wind Bistro, Royce Oliveira, center, serves customers Annalouiza Armendariz, left, and Caitlin Plante, second from right, at the Bistro Aug. 4, 2021. The Bistro requires proof of the COVID-19 vaccination only on Wednesday nights.

Not wanting to carry burden

For restaurants, bars and entertainment venues, state and city support is crucial to implementing any vaccination requirements now, operators say.

On Tuesday, the independent restaurant nonprofit EatDenver sent a survey to its 275 member businesses in an attempt to gauge interest in and concerns over the potential for vaccine mandates at their establishments.

“This is one of those topics where independent restaurant operators are really divided,” said EatDenver executive director Katie Lazor.

So far, around 70 restaurateurs have responded to the survey, and their concerns range from ethical considerations to “really just not wanting to see the private sector carry this burden again.”

“The majority of the folks that responded do not plan on (implementing a vaccination policy) unless the state or city governments mandate it or partner with them on a program,” Lazor said. “Being on the front line and being responsible for creating policies from scratch and policing them is just really unfair to the workforce and to these small businesses.”

On Twitter, the Colorado Restaurant Association said it trusts restaurants “to make the best choices for their guests and teams until we hear more from public officials, and ask CO diners to respect what their restaurants ask of them.”

When Smith of Bar Max implemented his policy in March, he said he faced constant online and over-the-phone harassment, mostly from “folks who probably never would have come to my bar anyway.” Meanwhile, in-person responses at the bar were overwhelmingly positive, though he did have to hire a door person for the first time, to check guests’ vaccination records.

“It was surreal,” Smith said. “I would get hate mail and phone calls all week… and then I would open the doors and people would just be ecstatic.”

EatDenver’s Lazor said she and her member restaurants are thinking back over the last year-and-a-half, to times when businesses at times were left to write their own rules and enforce their own regulations such as mask-wearing indoors. And she’s worried.

“I can’t imagine what the backlash will be on restaurant workers,” Lazor said of requiring proof of vaccination. “It’s just like mask-wearing, only more contentious, before it was a mandate and the norm. Restaurants need more guidance and especially the small independent operators need the backing of our state and local leaders to move forward with this.

“If this practice is essential to getting through without going back to limited capacity or a shutdown, then we need the government’s support on mandating it, backing it and executing it.”