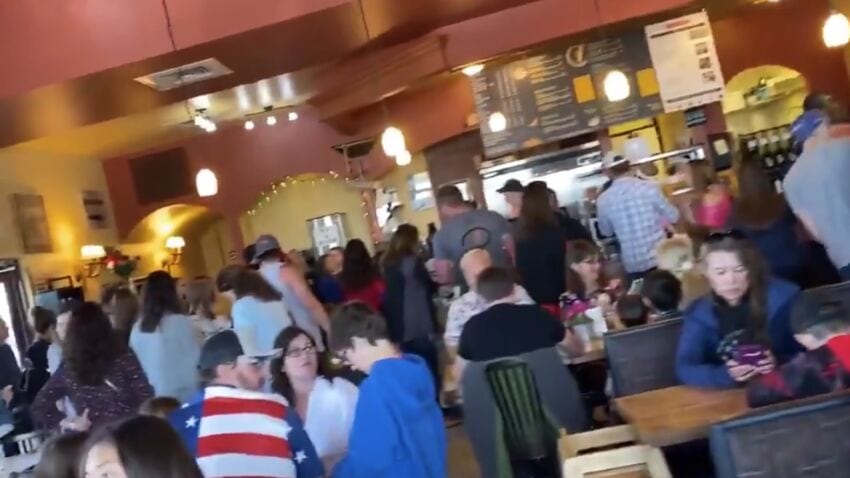 The armed bouncer appeared friendly, welcoming a local reporter inside C & C Coffee and Kitchen in Castle Rock, Colorado, to take video footage of the remarkable scene unfolding inside.

In the restaurant on Sunday morning, in defiance of Democratic Gov. Jared Polis’s executive Safer at Home order, every table was nearly full, according to the footage from Colorado Community Media reporter Nick Puckett. Customers crowded around the counter waiting for their orders. The line to place them went out the door, wrapping around the side of the building.

Almost no one was wearing a face mask. Only a single person among the dozens in Puckett’s footage can be seen wearing one.

For the owners of the breakfast cafe, it was a way to both celebrate Mother’s Day and defy the governor.

“We are standing for America, small businesses, the Constitution and against the overreach of our governor in Colorado!!” C & C Coffee & Kitchen wrote on its Twitter account, tagging President Donald Trump.

The restaurant’s reopening on Mother’s Day, with apparently no social distancing precautions, is the latest example of small businesses bucking their states’ executive orders while fearing for their survival. Under Polis’ “Safer at Home” order, restaurants are still prohibited from offering dine-in service. Colorado has seen more than 19,700 cases of covid-19, along with 973 deaths.

The move drew swift backlash, as state and local officials condemned the move and some Castle Rock residents feared the restaurant could have worsened covid-19 in the community. A spokeswoman for the governor’s office said in a statement to The Washington Post that the restaurant’s conduct is “endangering the lives of their staff, customers and community.” The Tri-County Health Department told CBS Denver it would be following up with the restaurant to take whatever steps necessary to ensure it complies with Polis’ order.

“We are disappointed that Cookies and Crème has decided to ignore the Governor’s Safer at Home order and open up today with no attention to social distancing,” the agency said in its statement. “This decision runs the risk of undermining the impact that other Douglas County businesses and residents have achieved over the last seven weeks by taking various social distancing measures.”

The Korean-fusion breakfast cafe’s owners, April and Jesse Arellano, did not respond to multiple messages seeking comment. But April Arellano told Puckett that she had never seen a Mother’s Day crowd at the restaurant like the one on Sunday in their seven years of operation. She told KDVR the restaurant had about 500 customers.

“I expected it to be busy. I never expected this,” she told Colorado Community Media. “I’m so happy so many people came out to support the Constitution and stand up for what is right. We did our time. We did our two weeks. We did more than two weeks . . . and we were failing. We had to do something.”

Few customers inside the restaurant appeared concerned about the lack of social distancing. In a since-removed Facebook Live video archived by CBS Denver, a maskless Arellano scans the noisy, crowded space, thanking everyone who came and saying, “So much for some of those people who said nobody would show up. And our patio is full.”

A sign on the door reportedly read: “ATTENTION: Our freedom doesn’t end where your fear begins. . . . If you are afraid to be within 6 feet of another person, do not enter this business!”

Others within the restaurant industry said they understood the restaurant’s frustrations but completely disagreed with the owners’ decision.

“Hey C & C Breakfast + Korean Kitchen Owner, what you allowed today completely harms the Colorado Restaurant Industry! You may have won the battle but you will lose the war,” Chris Fuselier, owner of the Blake Street Tavern in Denver, warned on Twitter. “The rest of us Owners will be watching what the State, Douglas County and Castle Rock will do to you!”

Full Disclosure: I went to Castle Rock and met C&C owners. They told me of their financial struggles. As a fellow independent restaurant owner, I understand their pain. HOWEVER, I strongly disagree with their decision to blatantly disregard social distancing restrictions. https://t.co/7qDX0xXGYf

Another man who went to the restaurant to pick up takeout told the Denver Post he was so taken aback by the lack of social distancing and the fact that no one was wearing face masks that he decided he didn’t want his food anymore.

“It was unbelievable,” the customer, Nick Whitehill, told the newspaper, adding he filed a complaint with the county health department.

But the restaurant also had plenty of supporters. Among them was state Rep. Patrick Neville, a Republican who is also among a number of conservative lawmakers nationwide who have joined their constituents in acts of defiance. He said on Facebook later that he found it “shocking” that, after taking a photograph of himself with Arellano at the restaurant on Sunday, the “left mob is coming after me over this hardcore.”

In a text message to The Washington Post, Neville said he went to the restaurant on Sunday to return the kindness the owners showed his family a couple of years ago, when his wife was hit by a car in a nonfatal accident outside the restaurant and they brought out hot cocoa to Neville’s daughters.

“They made a lasting impression on my family and we wanted to show our support as they are providing for their families,” Neville said.

Other business owners have been similarly defiant about reopening even after being threatened with the consequences, though some have chosen to keep social distancing restrictions in place. Dallas hair salon owner Shelley Luther, for example, was sentenced to seven days in jail for defying a court order to shut down, although salon employees were still wearing masks and taking customers’ temperatures. She was freed by the Texas Supreme Court two days after sentencing.

Elsewhere, a 77-year-old barber in Michigan, who has been in business since 1961, received two citations for reopening but has told reporters that he would keep operating “until Jesus comes.” In Maine, a brewpub owner lost his liquor and restaurant licenses after more than 150 people showed up to the establishment earlier this month. The owner, Rick Savage, had announced the reopening on Fox News’s “Tucker Carlson Tonight” – where he gave out Democratic Gov. Janet Mills’s cellphone number live on air.

But the business owners’ decisions to reopen is also largely a gamble in the court of public opinion. A recent Washington Post-University of Maryland poll showed sizable majorities of Americans opposing reopening dine-in restaurants, movie theaters and gyms.

The Yelp review page for C & C Coffee and Kitchen highlighted some of that disapproval Sunday, as dozens of people – some of whom were clearly not from Castle Rock – flooded the restaurant with complaints. Arellano’s supporters tried to defend her with compliments, including one woman who said “the coffee is to die for.”

“I stand behind April in these trying times for us all,” she wrote.

Sign up and receive coronavirus news and breaking updates, from our newsroom to your inbox.