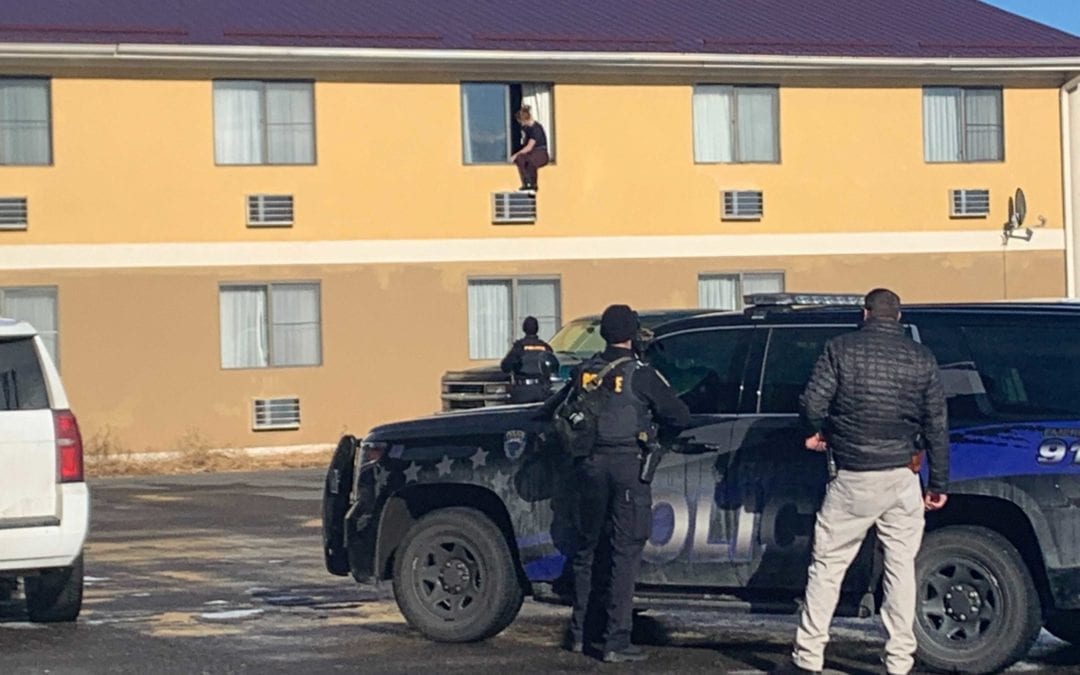 The two suspects who surrendered without incident after a brief standoff at a Riverton motel with local law enforcement on December 18th have been identified as 22-year-old Hannah Johnson, of Grand Junction, Colorado, and 28-year-old Gentry Blackburn, of Riverton.

The morning of the 18th, a Riverton Police Officer was dispatched to a reported vehicle break-in which resulted in a stolen wallet. The wallet contained the victim’s driver’s license, along with three credit cards, and $20, according to court documents.

Following this reported theft, charges on the missing credit cards were being made at Riverton businesses. After reviewing the footage from the establishments, RPD identified the possible suspect, a female wearing a bright green jacket – they were also able to discern her vehicle in the footage.

During this time, a second vehicle break-in with a missing handgun was reported in the area where the wallet had been stolen.

The suspect’s vehicle from the surveillance footage was spotted by law enforcement in the Super 8 parking lot. There, they were able to identify Johnson as the suspect in the vehicle break-ins and thefts.

Due to a handgun possibly being involved, the RPD’s Special Response Team was activated while warrants to search the motel room and Johnson’s car were prepared.

Johnson and Blackburn, who was also in the motel room, both surrendered without incident.

According to the court documents, Officers found the green jacket that Johnson was seen wearing earlier in the day in the motel room and located a Sig Sauer 9mm handgun in a zipper pocket which came back stolen out of Colorado.

Johnson’s vehicle had another vehicle’s license plate on it, as the Colorado plates that were on the vehicle did not match her car.Additionally, the RPD found 22.5 grams of marijuana inside the vehicle along with items allegedly purchased with the stolen credit cards and the stolen handgun from the Riverton property.

Johnson was arrested for 2 counts of burglary, 2 counts of larceny, credit card fraud, and possession of a controlled substance. Johnson is facing a maximum charge of 41 years and six months imprisonment with a maximum fine of $41,750.00 associated.

Blackburn was arrested for interference, according to RPD. In following up with the Riverton Circuit Court, they shared he was only cited.