What else could “Buckwheat” possibly reference?

As we discussed in this space a few weeks ago, the 2021 Colorado legislative session has been notable, in part, for a consistent effort from Republican lawmakers to abandon all attempts at maintaining basic social and political norms. On numerous occasions, Republicans have made hurtful comments and blatantly racist statements on the floor of the State House — comments that prompted little more than a shrug from Republican leadership.

In mid-April, Republican Rep. Ron Hanks tried to explain his alternative history of the 3/5ths compromise and opened his remarks WITH A LYNCHING JOKE. In response to an outcry from every person with a sense of decency, House Minority Leader Hugh McKean shrugged off the controversy. As reported on April 22:

The Loveland Republican told The Post he welcomes and encourages all perspectives. The lectern of the House, he said in a statement, “is the exact place where we can have uncomfortable discussions, about policy, about views and about the path forward in Colorado.”

According to McKean, racism is just a different perspective. It was thus inevitable that this would happen again; hell, we practically predicted as much. On Wednesday, Republican State Rep. Richard Holtorf took his turn: 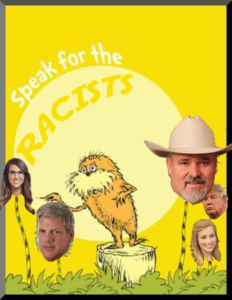 As you can see from the video, Holtorf gets really upset that people are “yelling at him” for using a term that any nitwit knows to be racist (Holtorf claims that “Buckwheat” is a term of endearment, which just makes it worse). It’s hard to give Holtorf the benefit of the doubt anyway; after all, this is the same guy who told Rep. Tom Sullivan — whose son was killed in the Aurora Theater shooting — to just “get over it.”

Holtorf will no doubt have some sort of ridiculous explanation and half-assed apology along the lines of, I‘m sorry if anyone was offended, but this will keep happening as long as Republicans keep shrugging it away.

Colorado Republicans will be asking voters to return them to power in 2022, but it’s a tough argument to make when GOP leaders do nothing when their own members spout horrible, racist things on the FLOOR OF THE HOUSE OF REPRESENTATIVES. At least in previous election cycles, Republicans could argue that they weren’t being OVERTLY racist.

If Republicans don’t want to be associated with white supremacists and hate speech, then they are free to be clear about distancing themselves from these viewpoints. But they’re not, and it isn’t from a lack of opportunity.

You know who repeatedly uses racist rhetoric? Racists! At the State Capitol, we call them “Republicans.”