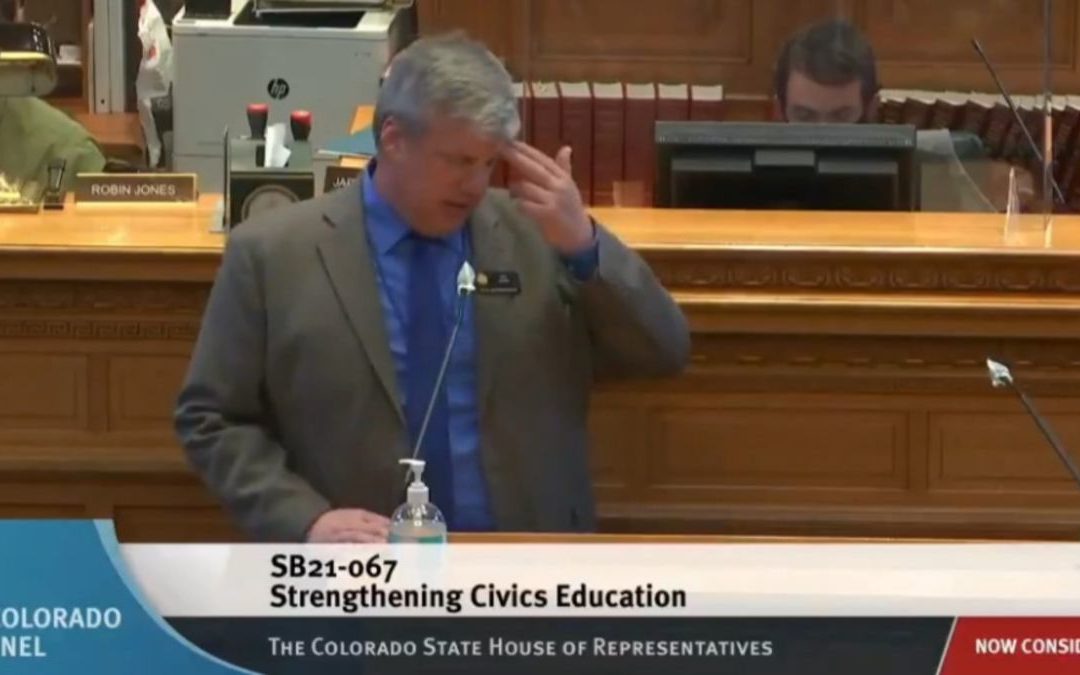 Republicans are so desperate to whitewash America’s racist history that they are willing to reach far and wide for white-splanations that rewrite history to make a nation that sanctioned mass human trafficking, torture and the oppression of an entire race for multiple centuries look like a noble country. In fact, one GOPropaganda member representing Colorado even went as far as to pretend that the “compromise” that ended in only three-fifths of Black humanity being recognized wasn’t racist. (Read that again.)

The Huffington Post reports that Colorado state Rep. Ron Hanks (R), a newly elected legislator who was reportedly involved in the Jan. 6 whiny-wypipo rebellion at the U.S. Capitol, took his Klanny-fanny to the state House floor during a debate on a bill aimed at strengthening civics education in the state’s public schools and basically proved that he has no fucking business debating on anything education-related.

Hanks began his a-whitey-historical diatribe with a joke that really wasn’t a joke. According to the Post, discount David Duke was mistakingly introduced as Colorado lawmaker Rep. Mike Lynch. Instead of ignoring the mistake, Party City Rush Limbaugh decided to use it as a jumping-off point for the racist AF rant that should have stayed in the drafts of his book on whitesplaining white supremacy.

“Being called Mr. Lynch might be a good thing for what I’m about to say,” Dollar Store Richard Spencer said. “No, just kidding.” (He said while not at all kidding.)

Somehow his totally self-aware lynching joke was the least offensive thing he was about to say.

“Going back to the founding, and going back to the three-fifths, and I heard the comments and I appreciate them, and I respect them,” Boomer Ben Shapiro continued. “But the Three-Fifths Compromise, of course, was an effort by non-slave states to try to reduce the amount of representation that the slave states had. It was not impugning anybody’s humanity.”

For the record: The three-fifths compromise was an agreement between both slave-owning and non-slave-owning states to keep America running smoothly at the expense of Black people—there’s nothing about that that can be construed as not racist.

Anyway, Great Value Bill O’Reilly could tell he was losing the room so when he heard the more reasonable members on the House floor audibly cringe at his display of flagrant caucasity, he tried to defend his neo-Nazi nonsense.

“Is this really racist to be talking about what the Three-Fifths Compromise was?” he asked. “I don’t think so, and I think it’s important. It’s part of the civics lesson here. It was brought up, and it merits discussion.”

The fact is that conservatives view American history through a very white lens. If U.S. history was told from the perspective of the oppressed—which was generally the point of the that conservatives got all butthurt over—it would be a completely different story.

But white conservatives aren’t ready for that conversation—they will always prefer comfortable lies over uncomfortable reality. And that’s why many politicians just need to stay the hell out of education. They aren’t interested in teaching, they’re agenda is to brainwash people into patriotism.