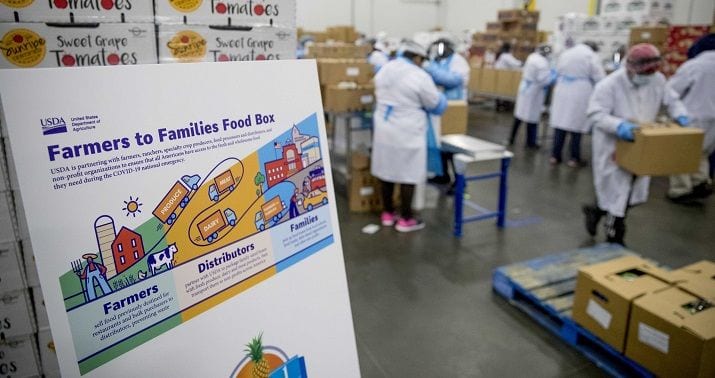 The US Department of Agriculture’s Farmers to Families food box program has been in operation throughout most of the pandemic. It helps support local farmers by offering a market for their vegetables, dairy and meat products. Those items are boxed up and distributed to food banks and other charitable organizations around the country to help feed people impacted by the COVID-19 crisis. Starting a couple of months ago, however, the boxes included something else. Each box had a letter from President Donald Trump inside offering reassurance and information on common safety procedures to follow to minimize the risk of spreading the disease.

This, of course, has outraged people, particularly in blue states, who see it as politicizing a nonpartisan relief program. In Colorado, workers decided to take matters into their own hands and they have started removing the letters from all of the boxes before they are distributed to the families in need. (CBS Denver)

The Denver Community Food Access Coalition is one of the groups distributing 1.8 million food packages to Colorado families. They’re full of fresh fruits and vegetables, dairy and meat, but not a letter signed by Donald Trump.

The Farmers to Families Food Boxes are sponsored by the U.S. Department of Agriculture. According to the DCFAC, each box contained a letter from the President reading in part “consider wearing a face covering when in public.”

The excuse for this decision being offered by the Denver Community Food Access Coalition is weak tea at best. They’re claiming that the President’s exhortation to “consider wearing a face-covering in public” is medical misinformation because the CDC guidelines say “CDC recommends that everyone wear a mask over their nose and mouth when in public.” This is essentially a distinction without a difference. The CDC can’t mandate the wearing of masks, so they “recommend” that everyone does. The President asks that people “consider” wearing one.

What the people running this program are really upset about is the idea that recipients of these boxes might be reminded that it’s the Trump administration’s Department of Agriculture sending out the relief. And they aren’t the only ones. Relief organizations in both Chicago and Oregon have been trashing the letters as well.

This wasn’t even something that Donald Trump cooked up himself. Fox News reported at the end of July that the idea came from Ivanka Trump. So was the letter political in nature, at least in part? C’mon, man… of course it was. You can read the full letter at that Fox News link. Most of it is fairly straightforward, describing the various benefits offered by the program and the aforementioned cautions about containing the spread of the virus. But the first sentence starts with the words “As President,” and includes the phrase “I prioritized” sending out the boxes in the first paragraph. The final paragraph describes the recipients as ” cherished members of our great American family.”

The wording is pretty clear. The needed relief isn’t just coming from “the government” or the Department of Agriculture. It’s a boon straight from Donald Trump’s largesse to the dinner tables of the needy. It doesn’t look to me like something that rises to the level of a Hatch Act violation, as some Democrats are suggesting, but it’s clearly meant to suggest that people have the President to thank for this assistance.

Still, the decision to include the letters was made by the Agriculture Department so they were put in the boxes. Does that mean that the people handing out the boxes are in violation of the law for tampering with them? Hard to say. I was going to suggest that I hope we haven’t fallen so far down the ideological divide that we’re going to get into a Left vs. Right spat over food relief, but I suppose that would be a silly thing to say. This is 2020, after all. Of course we will.