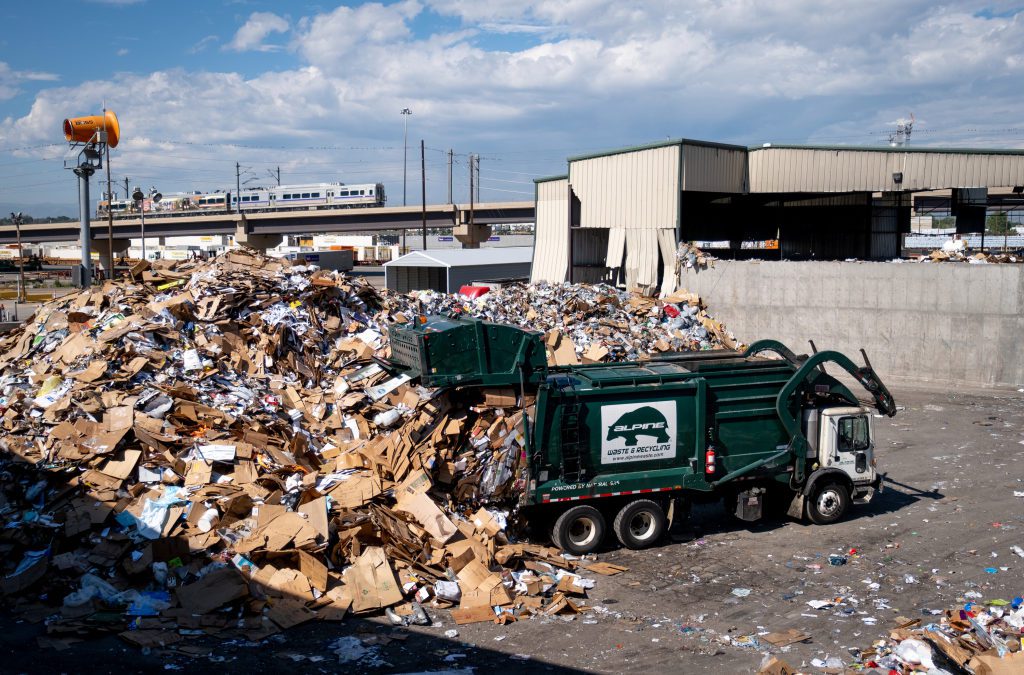 Nearly every family in Denver participates in the city’s recycling program and yet last year about 500 pounds of trash per person — a total of 193,988 tons — arrived in a landfill, up more than 5% since 2019.

Despite those numbers, Denver still does the most recycling in a state where residents recycle much less than the national average. Last year, Coloradans kept about 15% of their trash out of landfills, down from 17% in 2018 and far below the national average of 32%, according to data compiled by state health officials.

Dealing with rising waste is a challenge that has state and local leaders exploring what else they can do, from charging residents more for trash they dispose of in landfills to demanding that companies create products and packaging designed for reuse. Landfills remain a major source of the heat-trapping greenhouse gas that accelerates climate warming, Environmental Protection Agency officials say, and residents who diligently sort their trash say they’re motivated to do the right thing.

“If there’s a way to recycle more, I want to do that,” said wedding invitation business owner Cara Jo, 36, in southwest Denver, who has been amassing Amazon bubble wrap packaging, one of the items city recyclers currently cannot accept. “We’re doing harm to our planet, and if we keep doing what we’re doing it won’t be a very fun place to live.”

This summer, a report from Colorado officials who oversee landfills recommended that lawmakers consider requiring companies to take greater responsibility for products sold in the state and establishing a centralized program for recycling and reuse of materials. This would build on a 2014 statewide paint stewardship program that requires companies to collect unused paint.  It’s an approach other states, such as Washington, and European nations have taken to encourage smarter packaging and less dumping.

“Based on our research and experience with the Colorado paint stewardship program, producer responsibility laws have the ability to expand access to recycling services and could play an important role with improving the statewide recycling rate,” said Wolf Kray, materials management director at the Colorado Department of Public Health and Environment.

Recyclers themselves are developing better end markets to enable reuse of more materials — so that Denver and other cities could accept more types of trash in recycling bins.

In Denver, leaders are considering how they could expand recycling and compost pickup serves to apartment buildings and businesses, which generate much of the trash that ends up in landfills. Around the state, recycling advocates are conducting roundtable discussions and have provided $3.4 million in grants this past year to boost local recycling innovators.

And Arvada this year joined Loveland, Golden, Louisville and other communities where homeowners choose the size of their trash cans, with bigger cans costing more, to discourage disposal in landfills.

Gov. Jared Polis a year ago declared Colorado would move from being a recycling laggard to a leader. A state goal set in 2017 calls for recycling 45% of trash statewide by 2036.

Denver climate activists got more involved this month, submitting 17,000 signatures for a Waste No More ballot measure that would let voters decide whether businesses, including large apartment blocks, must provide composting and recycling pickup services. Proponents contend this would cut in half the amount Denver buries in landfills.

There’s also a growing consensus among officials and advocacy groups that companies must get more involved to enable easier recycling and reuse of materials.

“We need to focus on how things are produced,” said Danny Katz, director of the Colorado Public Interest Research Group, a nonprofit environmental and health advocacy organization. “Companies should have to pay to support recycling infrastructure and take back their materials for recycling.”

Beyond the purple bins

For decades, recycling burdens have fallen mostly on consumers, and Denver residents for the most part sort items carefully and fill purple bins picked up for free twice a month, said Grace Rink, director of Denver’s climate office, which helps oversee recycling in the city.

Denver recycling trucks haul the materials residents put in purple bins (and the green composting bins that cost an extra $9.75 a month) to contract facilities for processing and reuse — and last year kept 12,362 tons of yard waste and 47,883 tons of recyclables out of landfills, city stats show. The recyclables are taken to a 12-acre northside facility called Green for Life for sorting and sending away to industries that can reuse material.

Some purple bin material still ends up in landfills. However, new machines this year decreased that unusable portion from 12% to 10%, Green for Life materials manager Wendy Fauth said. Still, roughly 1,000 tons a month of collected recyclables, or 12,000 tons a year, ends up in landfills in addition to the 181,988 tons of trash Denver crews haul in directly.

Employees sort through plastic recyclables at the GFL waste recycling center in Denver on Monday, Aug. 23, 2021.

When China and India in 2018 declared they no longer would accept as much material from the United States, recyclers scrambled to develop domestic reuse industries, and better opportunities are emerging, Fauth said.

For now, consumers simply generate more waste and sort it. Some of the most diligent turned to a new private service this summer that collects items Denver’s recycling program cannot accept — charging $14 a month.

More than 1,000 Denver residents signed up for this service by Seattle-based Ridwell, which handles the challenge of finding new uses for hard-to-recycle materials, operations chief Derek Miles said. Subscribers are given porch bins and four cloth bags, one each for plastic film (produce bags or Amazon envelopes), batteries, lightbulbs and apparel.

Ridwell’s trucks take the material to a warehouse north of Denver for sorting and, then, to industries they’ve identified. For example, plastics crunched into bales move to a factory in Nevada where workers convert plastic to composite material for decking.

“Climate change is the biggest crisis we’ll ever face,” Metzger said. “We want to help people get to zero waste. Federal action is critical. And we see some states taking action. We need large-scale change.”