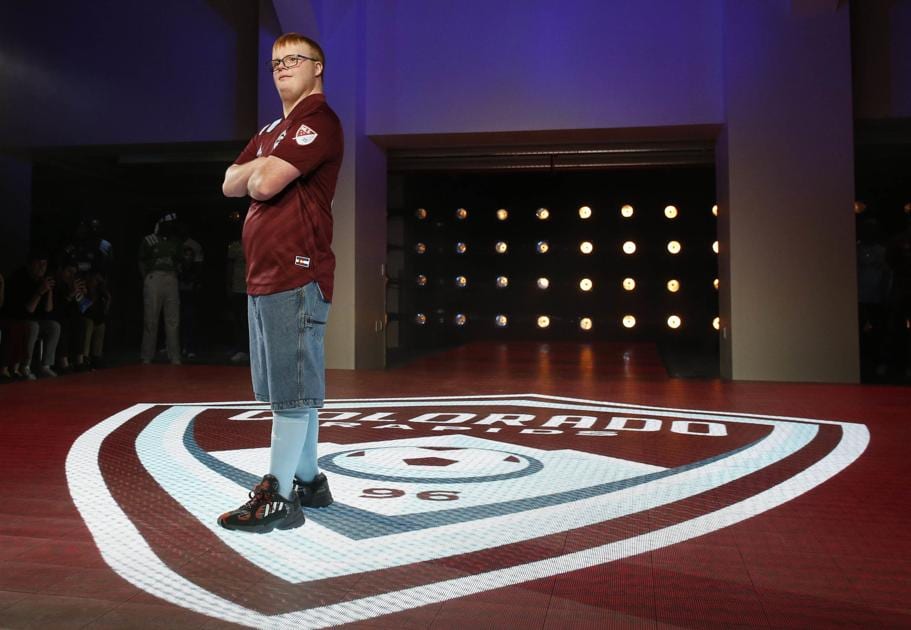 Nashville opted for country music star Lindsay Ell. Los Angeles was represented by actor Colin Hanks. Other teams went with NFL standouts from their cities, and many others picked past MLS greats.

The Colorado Rapids turned to Scotty Stephens, a Special Olympian from Colorado Springs.

Scotty was the first model to walk the catwalk at the show, drawing what Rapids senior director of community relations Caitlin Kinser described as “enormous applause.”

“He was totally in his element,” Kinser said. “The epitome of calm, cool and collected. We couldn’t have been prouder to have him represent us.”

In New York, MLS commissioner Don Garber introduced himself to Scotty and snapped a selfie. Scotty hung out with one of his soccer heroes, Alexi Lalas. He rode to the top of the Freedom Tower, received a professional makeover and then struck a pose.

Scotty’s trip to New York was part of an ongoing odyssey. At 27, he has played soccer in four MLS stadiums and has his name etched on a soccer state championship trophy on display at The Classical Academy.

“I don’t know if I can fully explain all of it,” TCA coach Blake Galvin said. “But his passion just really, really comes out and is obvious.”

“He’s an inspiration. He inspires me.”

When Scotty made his way out of the University of Colorado-Colorado Springs recreation center from a basketball game in early March, he exited to a chorus.

“Bye Scotty,” said his teammates, some of whom he’s grown up with through various Special Olympics teams.

“Bye Scotty,” said several college students who had started their intramural game immediately after Scotty’s game concluded. The referee officiating the game also turned from the action to offer a farewell.

Then Scotty made his way into the other side of the gym, where multiple players, officials and spectators took their turns greeting the red-headed Doherty graduate by name.

It became clear that everybody knows Scotty.

Scotty’s personality has made him an ideal fit for his job at Chick-fil-A where his responsibilities are in the dining area, or the “Heart of the House,” as store owner Rob Taylor put it.

“He’s a bright spot on the team,” Taylor said. “He’s always giving high fives. Doing little tricks, like touching a shoulder and then turning away. He’s just a free spirit. He adds that sparkle to our team.”

Scotty’s younger brother, Jonathan, was a standout soccer player at TCA and now at NCAA Division II Cedarville University in Ohio. During Jonathan’s freshman year of high school, Scotty began serving as the ball boy – running the sidelines and sprinting after balls kicked out of play. He served as TCA’s ball boy for three state championship games.

Jonathan still jokes that his name is hard to find on the trophy, but his brother’s is prominently listed up top.

“He still comes and is a ball boy for us at some of our home games – both boys and girls,” Galvin said. “He loves doing it. He loves being around soccer. Every time he shows up, just him walking onto the field, all of the players get excited. He cheers for them. They cheer for him. It really is a cool thing that happens with him.”

When Beth and Mark Stephens learned the Colorado Rapids were holding tryouts for their Special Olympics Unified Team a few years ago, they had no idea what was in store for their son.

The Rapids hold games for the Unified Team after their home games once or twice a season. The Unified Team gets the full treatment, including pregame introductions on the jumbotron.

Scotty made the team. Then Jonathan was added as a partner on the blended team. The brothers were then selected as all-stars and traveled to San Jose, Calif. Scotty has also played games in Salt Lake City and Houston.

“They treat them just like the team,” Beth Stephens said. “They give them jerseys. They sign autographs. It’s so cool.”

When the Rapids decided to spotlight their Unified Team with the jersey unveil in New York, the choice was easy.

“Scotty has a light about him that can put a smile on anyone’s face,” Kinser said.

Scotty’s interview with The Gazette was a brief one. A small group of UCCS female students sat nearby, so he was distracted, to say the least.

He explained that his arms-crossed pose in New York was one he came up with on his own. He said his favorite teams were the University of Colorado and the Denver Broncos – Joe Flacco and Drew Lock in particular. He even has a soft spot for Tom Brady.

And he loves sports.

“Basketball and soccer,” he said when asked his favorite sports. Asked which of those he prefers: “Football.”

Watching him play is an experience in itself. He bounces around the floor, playfully elbowing teammates and never passing up an open shot. There’s some craft to his game, too, as the right-handed Scotty switched to his left hand to scoop in a layup. He emulates what he has seen from his siblings – Jonathan and two older sisters, Wendy and Katie, also played soccer and basketball for TCA – and lifts his fingers to calls plays while dribbling the ball up the floor. The team doesn’t actually have plays. That doesn’t matter.

“He has brought so much joy to the Rapids Unified Team, our staff and the players,” Kinser said. “We just knew he’d be the perfect person to represent us.”