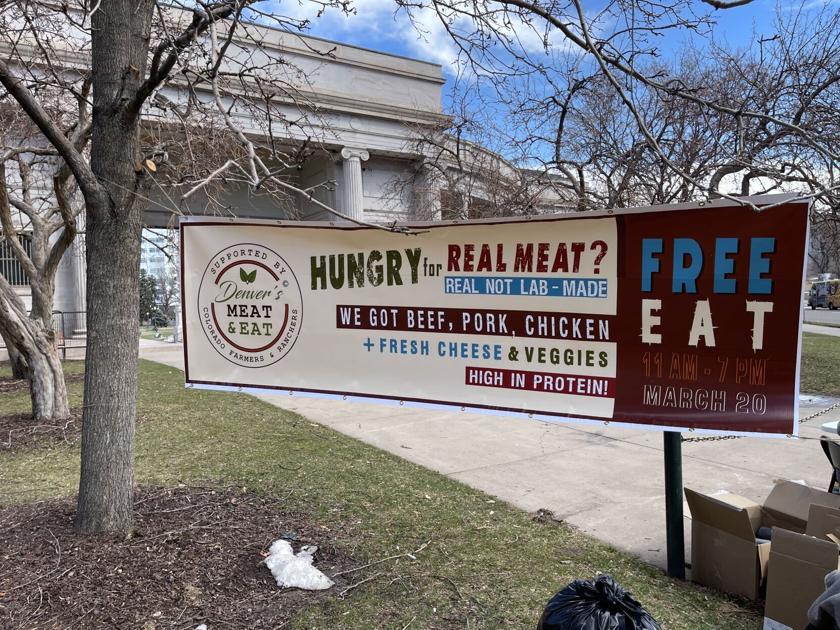 A group of Colorado ranchers and farmers treated over 1,200 people with free burgers, tacos, gyros and other meaty dishes on Saturday in response to Gov. Jared Polis’ proclamation designating Saturday as “MeatOut Day” across the state.

Organizers of Saturday’s “Meat & Eat” event in Denver gathered nine food trucks  on the south side of Civic Center park in an attempt to give back to the community and peacefully protest Polis’ meat-free day.

“We think we were unfairly treated over (the proclamation), because (Polis) is trying to say our product is unhealthy, but that’s just not true,” said Andrew Timmerman, the owner of Timmerman Feeding Co. in Sterling.

“We have a right to tell people (our story), but also wanted to give back to those who have had a hard time finding something to eat because they’ve lost their job or are homeless due to COVID.”

“MeatOut Day” was first celebrated in 1985 as a response to the Great American Smokeout by the Farm Animal Rights Movement. The day is designated to promote the idea of reducing meat, dairy and egg consumption and promoting plant-based diets, according to MeatOut’s website.

The move received instant backlash from many across the state and several counties, including Weld and El Paso, deemed Saturday as “Meat In Day.”

“Our farmers and ranchers are the original stewards of our environment,” Weld County Commissioner Lori Saine told The Denver Gazette earlier. “To those serving us in one of Colorado’s first industries, this seems like a pre-emptive strike against agriculture.”

Weld County is the state’s leading county for agriculture products sold, bringing in $2 billion each year.

Vajani Telos, the co-owner of Greek Bites food truck, she said she understands the governor’s position, but believes it is harmful to not fully support certain industries.

“It’s important to show support to (the farmers and ranchers) rather than sideline them, and I know (Polis) is in a difficult position, but we still have to support everyone,” Telos said.

Brandon Green of Tulsa, Okla., was leaving the Denver Art Museum with his wife and two kids when they were told about the event. He said encouraging plant-based diets and the end of meat consumption could motive some, but not the majority.

“Americans eat meat and that’s just a part of our identity and that’s not going to change,” Green said while eating a burger.

On Friday, the Luvin Arms Animal Sanctuary in Erie and DJ CAVEM offered to buy members of National Cattlemen’s Beef Association a free plant-based meal at any of Colorado’s restaurants on “MeatOut Day.”

“March 20th is a day that we can all come together for the most beautiful reason — compassion for all beings on this planet we all share,” said Shartrina White, executive director of Luvin Arms. “It’s time to embrace ahimsa, the belief in nonviolence to all beings in thought, feeling and deed.”

But for some, the battle isn’t about whether or not to eat meat, it’s about finding anything to eat.

“It’s awesome bro cause if you go anywhere else there’s nothing like this happening,” Gary Gibbs said while eating a gyro. “This is (going to) help a lot of people today and that (doesn’t) happen (often).”