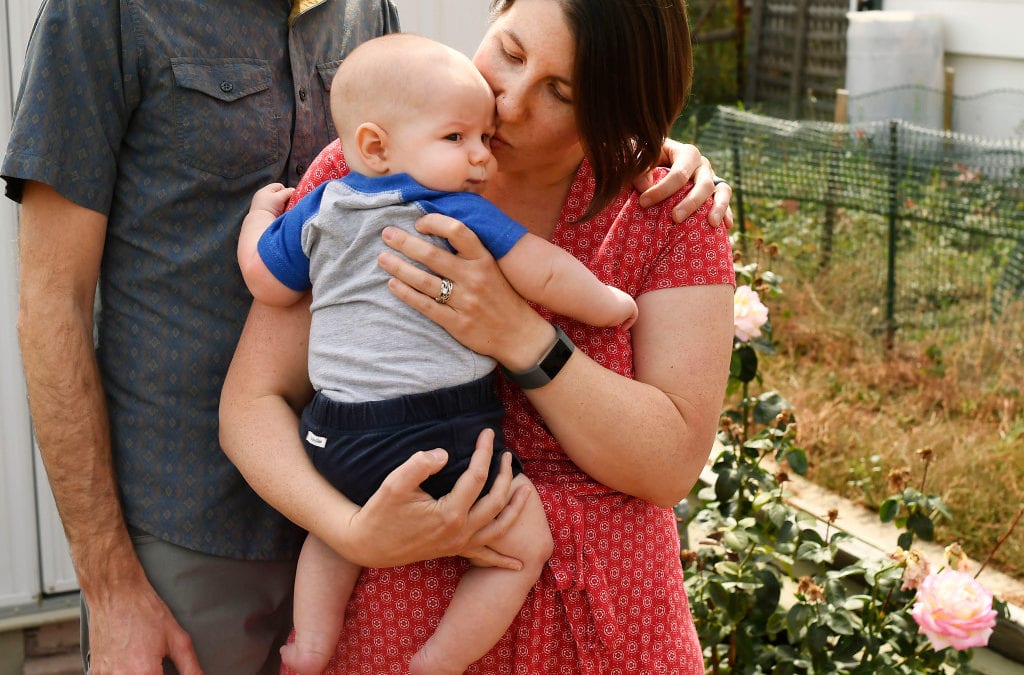 The birth of Anne Misak’s baby boy in May was a challenge, with the Lakewood mom undergoing a caesarian section that required at least six weeks of recovery.

While her husband cashed in all of his vacation days to take time off from work, he had to return to his job after five weeks of being home with their newborn. That left Misak looking after their son by herself.

“I told my husband, ‘You cannot be going back to work already.’ I probably did a few things I shouldn’t have done,” Misak said, referring to times she picked up her baby even though her doctor told her to not lift more than 10 pounds. “The fact that he had to go back to work before I was fully recovered definitely made it challenging.”

Had the couple had access to paid family and medical leave, Misak said, “it would have been a lot less stressful.”

On Nov. 3, voters will be asked to decide Proposition 118, a ballot measure that would create a state-run paid family and medical leave insurance program for Colorado workers. The program would give employees up to 12 weeks of paid leave annually — a weekly maximum of $1,100 in the first year — to be with a newborn or to care for themselves or a family member who is seriously ill, while also safeguarding their jobs.

The measure would mandate that both employers and employees fund the program through a payroll deduction.

“This is an issue that affects almost everyone,” said Olga Robak, a spokeswoman for Prop 118 advocacy group Colorado Families First. “We need to make sure people can put their families first without that additional stress.”

But the state’s business community is sounding alarm bells about Prop 118’s size and cost — pegged at $1.2 billion a year — and warning that it could further damage an economy that is still badly hobbled by the ravages of the coronavirus pandemic.

“It’s a payroll tax during the worst economy in years,” said Loren Furman, senior vice president of state and federal relations with the Colorado Chamber of Commerce. “It’s going to be on the backs of employers and employees.”

Tony Gagliardi, Colorado director for the National Federation of Independent Business, said the measure is a government-ordered hammer blow to the private sector.

“What we oppose is a government mandate that assumes that every business everywhere of every size can afford to offer the same benefits that big companies can,” he said. “It’s going to increase the cost of doing business.”

Colorado would be the ninth state in the nation — and the first not on the coasts — to establish a paid family and medical leave system. California was the first to launch such a program in 2004.

The federal Family Medical Leave Act of 1993 protects an employee’s job while providing up to 12 weeks of leave to that employee, but the time away from work is not compensated. While bills have been introduced in Congress to implement a paid leave program nationwide, none so far has made it to the president’s desk.

For six years, Democrats in the General Assembly have tried unsuccessfully to pass a paid leave bill, including during this year’s pandemic-shortened session. If it passes, Colorado would be the first state to approve a paid leave program at the ballot box rather than through a vote of state lawmakers.

“This looks like it’s an opportunity for Colorado to be a trendsetter in the middle of the country,” said Michelle Long, senior policy analyst for women’s health policy at the Kaiser Family Foundation. “There’s been a new spotlight on paid leave because of the pandemic.”

The states with paid leave programs — including Washington, Oregon, New Jersey and Rhode Island — employ various approaches. They set different parameters for compensation levels and who can opt out of paying premiums. A majority of the states require employers and employees to share the cost of the premiums that fund the coverage while the rest place the cost fully on the employee.

Colorado’s program would split the cost of the premium, which amounts to 0.9% of an employee’s annual pay, evenly between worker and employer. According to calculations from the state’s Legislative Council, an employee earning $52,000 a year would pay $234 in premiums per year, as would that worker’s employer.

Payments would be made on a graduated scale, with the lowest-wage workers receiving up to 90% of their weekly pay and higher wage earners receiving as little as 37% of their paycheck. The maximum weekly payout for anyone on paid leave in the program’s first year would be $1,100.

The Colorado Department of Labor and Employment, which would oversee the program, would begin collecting premiums in January 2023 and start paying out claims a year later.

To qualify, an employee would need to earn at least $2,500 in wages and job protections would kick in after an employee worked at the company for half a year. Businesses with nine or fewer workers would be exempt from having to pay into the system, though employees could still pay their share to qualify for coverage.

Local governments would be able to opt out of the public program, as would employers with a paid family and medical leave program that meets minimum requirements.

“Less than 40% of the Colorado workforce has the ability to take time off from work with some pay when they have serious life events happen,” said Kathy White, deputy director at the Colorado Fiscal Institute, which backs the measure. “Those few hundred dollars a week make all the difference.”

White said paid family and medical leave programs have payoffs that can’t be measured merely in dollars. Women and children benefit in particular, she said. Many mothers prematurely stop breast-feeding their babies because they have to return to work, White said, and paid leave allows them more and better bonding time with their child.

There are also benefits for employers in the form of more satisfied workers who may feel more loyalty to the job, she said.

Aurora resident Sandra Parker-Murray went through a rough period in the early 2000s when she had to repeatedly travel from Georgia to Mississippi to visit her ailing mother, all while surviving on a $35,000 salary.

A paid leave program would have been “a great stress reliever” that would have given her “peace of mind to take care of family,” she said.

Too much, wrong time

Linda Jones, who owns Area Rent-Alls in Westminster and opposes Prop 118, said she makes one-on-one arrangements with her employees when sickness strikes or pregnancy occurs.

While Jones has fewer than 10 employees at her store — where she rents out tractors, lawnmowers and other equipment — she worries that growing her business by just a couple of employees would subject her to the mandates of the initiative, should it pass. She said it’s not practical or feasible to find and train someone while an employee is on paid leave, only to send the new person packing in three months.

Gagliardi, with the National Federation of Independent Business, said more than 70% of the 7,000 member businesses in Colorado already offer some form of paid leave to their employees.

“This is an issue that has always been negotiated between the employer and the employee,” he said.

And the impact on employees of paying into the system is not negligible, Gagliardi said.

“It’s going to have a disproportionate impact on low-wage employees,” he said. “It lowers their take-home pay.”

The Colorado Chamber’s Furman said workers “are going to be taxed at the worst time possible,” as the economy remains in a deep funk due to COVID-19 infections that show no signs of slowing.

“They may not be able to make the car payment or pay the grocery bills — this is the worst time to take money out,” she said.

Colorado, she said, is going too big with its paid leave program, exceeding the thresholds and conditions of the federal unpaid leave law. She worries about the program’s long-term solvency and whether the legislature will eventually have to raise premiums should too many people file claims.

“Because if too many people use it, that’s another tax increase for workers,” Furman said.

But Robak, with Colorado Families First, points out that the United States is one of the few advanced countries left on earth that doesn’t offer paid maternity leave. According to the Organization for Economic Cooperation and Development, the least amount of paid leave time offered out of 41 nations studied is about two months.

Several countries — including Bulgaria, Hungary and Japan — offer more than a year’s worth of paid leave to new parents.

“Every other industrialized nation on earth has this figured out,” Robak said.