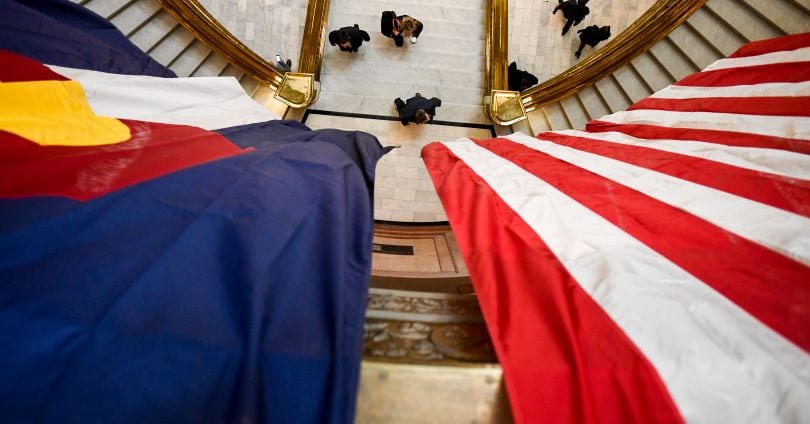 A proposal to significantly scale back Colorado’s standardized school testing this year cleared its first hurdle Friday after proponents and opponents came together in an overwhelming show of support.

The bill cleared the House Education Committee with a bipartisan 8-1 vote after sponsors decided not to pursue their original proposal to cancel statewide testing this spring because of fears that the federal government wouldn’t sign off on such a plan.

The new bill minimizes testing for students, teachers, and administrators dealing with the effects of the pandemic. The legislation would have Colorado students take a single standardized exam — either math or literacy, but not both — in grades three through eight rather than the suite of tests that students would take in a typical year.

The bill will now go to the House Appropriations Committee, where sponsors hope to move it quickly through the legislature and to the governor’s desk so that state education officials can prepare a waiver request for the federal government.

A diverse coalition of supporters from both sides of the testing debate agreed the bill is the best path forward for Colorado schools. Bill co-sponsor state Rep. Barbara McLachlan, a Durango Democrat, said lawmakers sought compromise.

“It is a good bill that shows the power of teamwork to find the balance between what students, educators, superintendents, data collectors, the federal government, and Colorado needs,” said McLachlan, the chair of the House Education Committee.

House Bill 21-1161 also cancels social studies and science testing. If passed, the legislation would direct the Colorado Department of Education to request a waiver from the federal government to reduce the testing requirements this year.

The bill also would not allow testing to be used in teacher and district evaluations. The testing window is supposed to open later this month, and school districts are already preparing.

Colorado students typically take math and literacy standardized tests in grades three through eight, as well as either a science or a social studies exam, depending on their grade level. The tests are known as the Colorado Measures of Academic Success or CMAS.

Students in grades three, five, and seven would take the literacy test and those in grades four, six, and eight would take the math test. Parents would be able opt their children out of the exams. And parents also would have the opportunity to have their child take both math and literacy exams.

Rep. Colin Larson, a Littleton Republican who voted for the bill, said he would have liked the state to still administer the full suite of statewide standardized tests.

“But I think it’s a fair recognition of the importance of having publicly available testing data for these grades while providing flexibility and relief to teachers and schools that undoubtedly will have a very difficult time,” Larson said.

Bill sponsors initially hoped to pass legislation asking the federal government for a waiver to halt testing and use district-level assessments to understand the learning progress of students. But after the Biden administration released guidelines making that impossible, and hoping to strike a compromise, lawmakers introduced the new, scaled-back effort this week.

The Biden administration in a February letter directed states not to cancel the tests. The letter underscored the importance of states issuing exams to understand potential student learning loss.

State Rep. Emily Sirota, a Denver Democrat and a co-sponsor of the bill, said the changes are not meant to invalidate educator and parent experiences and concerns about testing.

Many school district administrators, board members, and teachers have called for the tests to be canceled entirely due to pandemic disruptions. Students have been forced to learn remotely, and many educators and lawmakers worry about the learning loss over the last year.

A number of educators and district leaders have said giving the tests creates another hurdle that takes away from instruction and won’t yield valid data.

“This compromise here is sort of a meeting in the middle,” Sirota said. “This is Colorado doing the best we can to honor what is happening across our state.”

Derek Briggs, a University of Colorado professor and director of the Center for Assessment Design Research and Evaluation, has been skeptical of the value of administering tests this spring, when opt-out rates are likely to be high, especially for the remote learners that many people are most concerned about.

Testing every grade in math might provide a clearer picture of student learning than alternating grades and subjects, Briggs said. But an every-other-year approach to math and literacy tests could still provide some sense of which schools did well and which struggled more.

Any limited testing, however, will leave gaps, and the data should be interpreted cautiously, he said.

During the House Education Committee meeting, dozens of supporters showed up to support the compromise bill. Only a few spoke against the bill, saying the state shouldn’t administer tests during this time.

But prominent supporters of the bill from both sides of the testing debate emphasized that the legislation struck a middle ground based on the federal parameters in place by the Biden administration. And the compromise headed off a larger debate on a fiercely polarizing topic.

And while Colorado Education Association President Amie Baca-Oehlert expressed disappointment that the Biden administration will require tests, she said the bill gives necessary relief to students and educators instead of making them take numerous tests.

“We don’t need standardized tests to tell us that we are currently at a place where many of our students are just getting back to more consistent in-person learning,” Baca-Oehlert said. “What is needed in this moment is to prioritize every minute of the school day for instruction.”