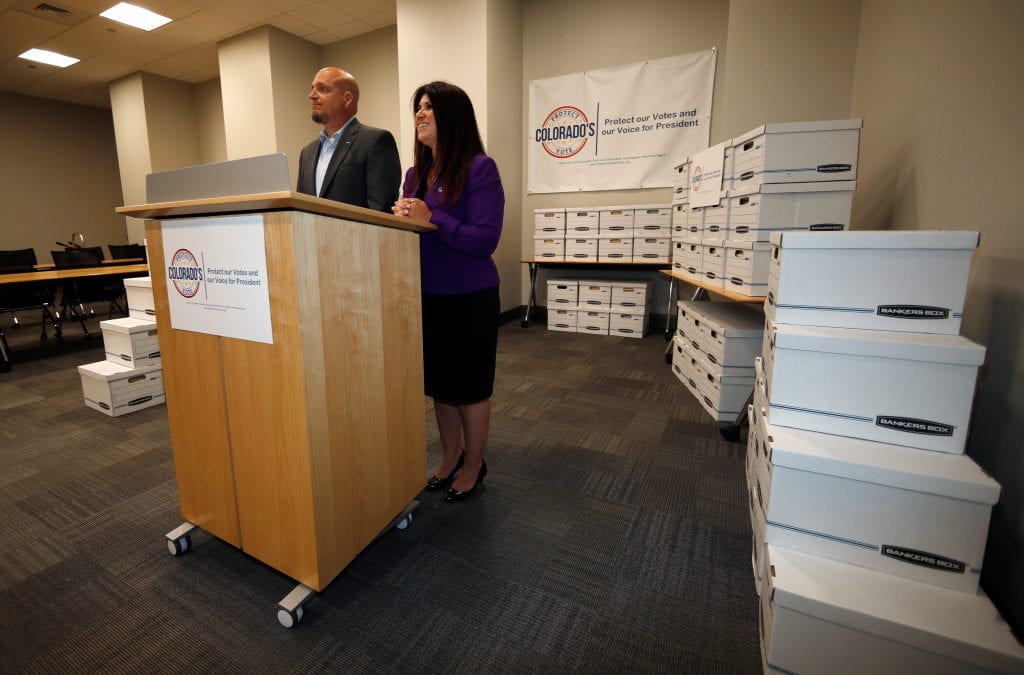 Colorado voters will decide Tuesday whether to join 14 other states and Washington, D.C., in agreeing to one day assign the state’s Electoral College votes to the winner of the nationwide popular vote for president.

State lawmakers passed a bill in 2019 putting Colorado in the National Popular Vote Interstate Compact, but that decision was challenged by a citizen initiative that put the final decision in voters’ hands this fall. A “yes” vote on Proposition 113 keeps the state in the compact while a “no” vote maintains the system Colorado has used for decades to choose a president: The candidate with the most statewide support receives all of Colorado’s electoral votes.

Colorado currently has nine electoral votes but is likely to pick up at least one more once the 2020 Census is complete.

Opponents of Prop 113 say presidential contenders under a national popular vote system will go where the votes are — namely big cities in populous states.

“If 113 passes, there would be no reason for a candidate to come to Colorado anymore — we would lose our clout and our importance on national policy issues,” said Frank McNulty, a former Republican state House speaker who serves as an adviser to the anti-Prop 113 group Protect Colorado’s Vote.

But backers of the measure say Colorado — and dozens of other states — are already largely ignored under today’s Electoral College map, where a handful of swing states get most of the presidential campaigns’ attention and often determine the winner. America’s 100 largest cities encompass just 17% of the nation’s population, so any viable campaign couldn’t restrict itself to large urban population centers, proponents say.

“We want to make sure presidential candidates think about people across the country, and what they think — not just voters in Pennsylvania,” said Democratic state Sen. Michael Foote, who supports the advocacy group Yes on Prop 113. “The national popular vote is a way to make sure our president gets elected on the principle of one person, one vote.”

Even if voters pass Prop 113, nothing would change immediately. Counting Colorado, the states that have enacted laws embracing the national popular vote account for 196 electoral votes, short of the 270 votes needed to prevail in the Electoral College. The compact doesn’t take effect until it controls at least 270 electoral votes.

The national popular vote movement has been building slowly over the last 14 years, with Maryland the first to join the compact. It launched following Republican George W. Bush’s 2000 defeat of Al Gore — an election in which the Democrat beat Bush in the popular vote but lost in the Electoral College.

The same situation recurred 16 years later when Republican Donald Trump won the presidency in the Electoral College, even though he earned nearly 3 million fewer votes than Democrat Hillary Clinton in the popular vote.

The United States has had three other elections, all in the 1800s, in which the candidate earning fewer votes nationwide ultimately won the White House.