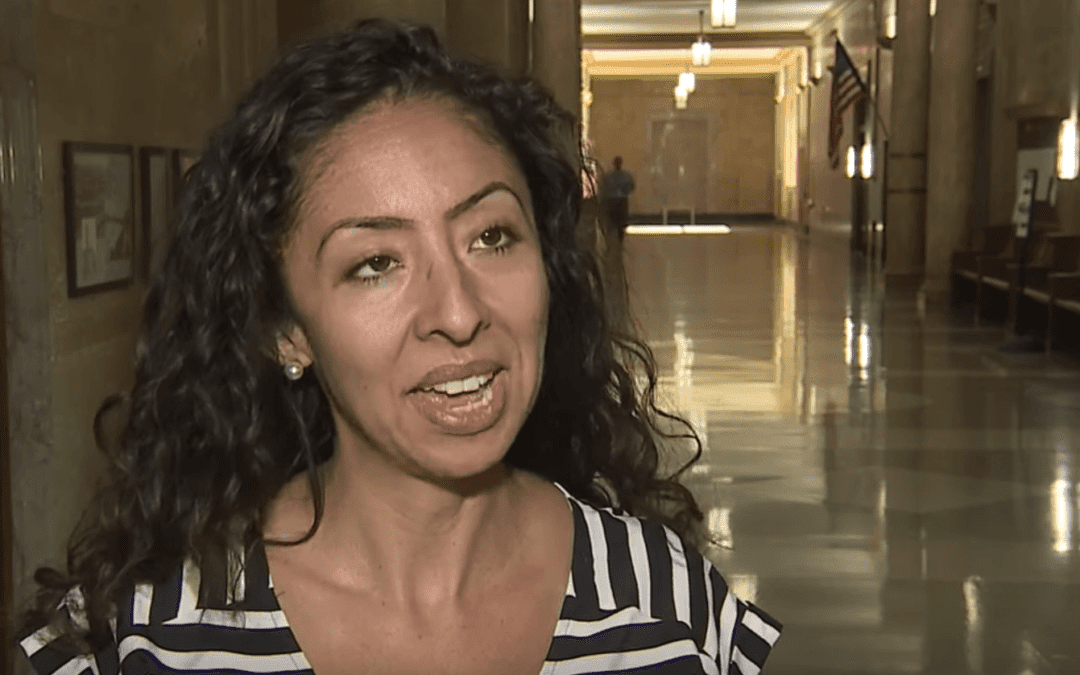 Denver, CO – Did Denver Democrat Candi CdeBaca just endorse using coronavirus as a bio-weapon against supporters of the president in her official capacity?

CdeBaca, a Denver councilwoman, re-tweeted a post suggesting that coronavirus should be spread and used against Trump supporters.

Democrat Denver City Councilwoman Candi CdeBaca appears to say that she stands in with apparently using the coronavirus as a weapon against supporters of President Donald Trump. https://t.co/gxbHSD8cnR pic.twitter.com/F9WMdyvMcP

People are not sitting idly by for this one.

It’s scumbags like this I did NOT serve my country to protect… https://t.co/lS1Q0GVlxG

Candi CdeBaca, who happens to be a self-described Democratic socialist, attempted to defend her action by calling the tweet sarcasm.

1. Are you listening to ANYTHING Trump has said about the virus? 🤔
2. Do you realize Trump reduced the virus to a common flu?🤦🏾‍♀️
3. I know sarcasm is hard to read in a tweet, 🤷🏾‍♀️but you are usually a bit quicker than this. 😏
Next time I will use more emoji’s just 4 you😉😑

Oh, and also, does she realize how many deaths occur each year because of the “commom” flu?

“Denver City Councilwoman Candi CdeBaca is facing push back from a Friday tweet that seemingly endorsed spreading the new coronavirus at conservative rallies.

She said the message was actually about calling attention to President Donald Trump’s unsatisfactory response to the spread of the virus, COVID-19, which has not yet hit Colorado.

The original tweet, which was not written by CdeBaca and was deleted Tuesday morning, was published late last week and said ‘For the record, if I do get the coronavirus I’m attending every MAGA rally I can.’

The acronym stands for ‘Make America Great Again’ and is typically — if not exclusively — used at conservative rallies, in particular those in support of Trump.

‘#solidarity Yaaaas!!’ CdeBaca replied as she shared the California woman’s tweet. The councilwoman’s own tweet garnered 367 additional shares and 216 likes as of Tuesday morning. Many of the replies called for her resignation and said the authorities should be contacted. The Colorado Republican Party also echoed those calls for her resignation.”

There is a growing #WalkAway movement happening nationwide.

The hashtag is used to describe voters who are walking away from the Democrat party.

Some users have used the hashtag in response to CdeBaca’s tweet. Will more voters walk away in Colorado before November?

If CdeBaca doesn’t resign, some social media users are even calling for the local Denver government to remove her from the council.

The Colorado GOP has officially called for her resignation. Political figures are supposed to represent all constituents regardless of party, ethnicity, income, religion, or anything else.

CdeBaca’s tweet shows blatant disrespect for her position as well as those in her city.

Local 9 News has details on the Colorado GOP’s response:

‘There can be no room in our politics for wishing harm on Americans who have different political beliefs. Democrats in Colorado and across the country need to condemn this evil statement,’ Fangonilo said in a press release.

CdeBaca’s chief of staff, Lisa Calderon, suggested that Republican outrage should instead be focused on the Trump administration’s response to the spread of coronavirus.

‘Councilwoman CdeBaca made a sarcastic tweet on Twitter to call attention to the Trump administration’s downplaying of the Coronavirus outbreak as a “hoax” no more dangerous than the common flu,’ Calderon said.

Democrats have accused President Trump of describing the virus as a “hoax,” while he has countered that he was referring to Democratic efforts to politicize his administration’s response the global flu-like illness.

‘Rather than conservative outlets making a four-day-old Tweet their focus on Super Tuesday, they should focus their energy on demanding a competent Federal response to this public health crisis instead,’ the statement continued.”

Hey Lisa, there is a problem with your premise. It is a flat out lie and you know it.

There is nothing sarcastic about her response. Perhaps you should look up the word sometime…her response was far from sarcastic.

Second, it doesn’t matter if the tweet is 20 minutes or 4 days old, it was tasteless and indefensible.

Meanwhile, more people are dying form the virus, as well as that pesky “common” flu that seems to be going around…every year.

See Lisa, that was sarcasm.

The Center for Disease Control estimates that over the last decade, between 12,000 and 61,000 people die annually in the US from flu or flu-related symptoms.

Cases of illness range from 9.3 million to 45 million. The high end of those numbers come as a result of the 2017-2018 flu season, which was extremely severe.

Yet many in the mainstream media caution us not to fear.

The Huffington Post even wrote an article telling us not to believe everything we read about the flu.

In part, the article read:

‘Somewhere between 4,000 and 8,000 Canadians a year die of influenza and its related complications, according to the Public Health Agency of Canada,’ the Globe and Mail says, adding that ‘Those numbers are controversial because they are estimates.’

‘Controversial’ is an understatement, and not just in Canada, and not just because the numbers are estimates. The numbers differ wildly from the sober tallies recorded on death certificates — by law every certificate must show a cause — and reported by the official agencies that collect and keep vital statistics.

But now, that same media wants us to buy into the panic of the coronavirus. Oh, by the way, they are seemingly looking for ways to pin the ‘outbreak’ on the President.

Editor Note: We are not making light of the spread of this virus. We hope it can be contained and eradicated. We do not wish illness or death on anyone.

But I, as an individual, have to ask: Is it really an outbreak of apocalyptic proportions when Lysol Wipes have listed it on the back of their containers as one of the viruses that it is effective in fighting, killing 99.99% of the germs that cause it.

The New England Journal of Medicine is now speculating that the coronavirus could be no worse than a severe flu season.

The authors of the editorial say that coronavirus looks to be much less severe than other recent outbreaks of respiratory illnesses:

“The overall clinical consequences of Covid-19 may ultimately be more akin to those of a severe seasonal influenza (which has a case fatality rate of approximately 0.1%) or a pandemic influenza (similar to those in 1957 and 1968) rather than a disease similar to SARS or MERS, which have had case fatality rates of 9 to 10% and 36%, respectively.”

LET has a private home for those who support emergency responders and vets called LET Unity.  We reinvest the proceeds into sharing their untold stories. Click to check it out.

Citing Breitbart, the authors go on to say that the vast majority of patients recover, and among those who are hospitalized, the median stay thus far is 12 days.

Coronavirus, they note, does spread easily, and the average infected person has infected two other people. That means the U.S. should expect the illness to gain a “foothold.”

But they note travel restrictions on China (imposed by President Donald Trump over the objections of some critics) “may have helped slow the spread of the virus.”

As such, many are wondering just what role the media is playing and what exactly they are trying to accomplish. The President’s son, Don Jr., has never been one to pull any punches. Here is what he had to say on the matter.

“For them to take a pandemic and seemingly hope that it comes here and kills millions of people so that they can end Donald Trump’s streak of winning is a new level of sickness,” he said on Friday.

In the Fox and Friends segment, the hosts open by saying that 83,000 cases have been reported worldwide, but that isn’t stopping Democrats or the media from blaming President Trump.

Trump Jr. was reacting to an editorial posted in the mouthpiece of liberalism, The New York Times, entitled:

“Let’s Call It Trumpvirus: If you’re feeling awful, you know who to blame.”

I bet you can see where this is going.

The Times editorial attacked Trump for appointing a “pointless’ czar, all while ignoring the fact that his predecessor appointed 38 of them. This was Trump’s first. In fact, Democrats have appointed 68 czars to Republicans 42.

She then went on to ridicule that czar, Vice President Mike Pence. She quickly pointed out that his only qualification was that he ran Indiana. The reality for Pence is that he spent 12 years in Congress before leading his home state for 4 years.

Again, she fails to point out that the previous President himself, had never run anything, having only been a freshmen Senator for 3 years, with much of that time being spent on the Presidential campaign trail.

Meanwhile, the President stated clearly that his administration was working diligently and effectively to handle any crisis here in the US from coronavirus. He also referenced the fact that the media would not give them credit for doing so.