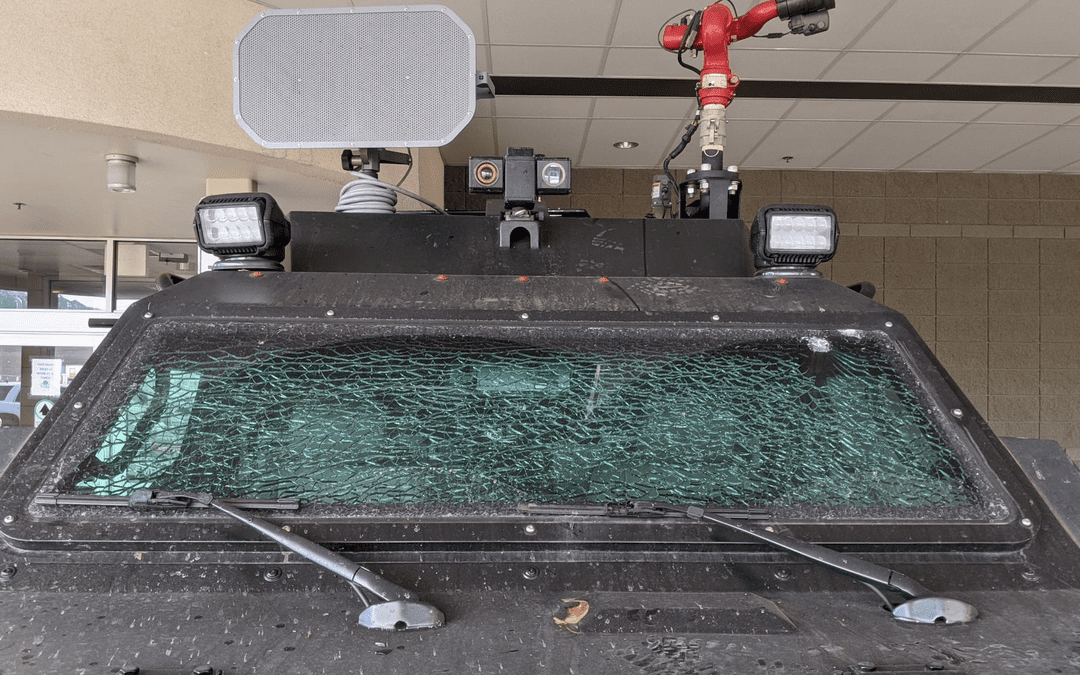 BOULDER, Colorado — Boulder officials on Sunday promised arrests are forthcoming for those who threw rocks or bottles at police or damaged property during a large, out-of-control party Saturday on University Hill that turned into a riot.

University of Colorado Boulder officials also said at a news conference Sunday that students who committed criminal acts may be removed from CU Boulder and not readmitted. Anyone who was part of the gathering also should quarantine for 14 days and participate in the university’s coronavirus monitoring testing, officials said.

But the university isn’t planning to cancel in-person classes. CU Boulder students returned to campus for hybrid and in-person learning in mid February.

Saturday night, Boulder police were able to disperse the large crowd, which Boulder Police Chief Maris Herold estimated at between 500 and 800 people, gathered near Pennsylvania Avenue and 10th Street. But before officers could get them to scatter, there was no social distancing, fireworks were exploded and a car was flipped over. Three police officers were minorly injured, while many other cars plus a police vehicle and a Boulder Fire-Rescue engine were damaged. 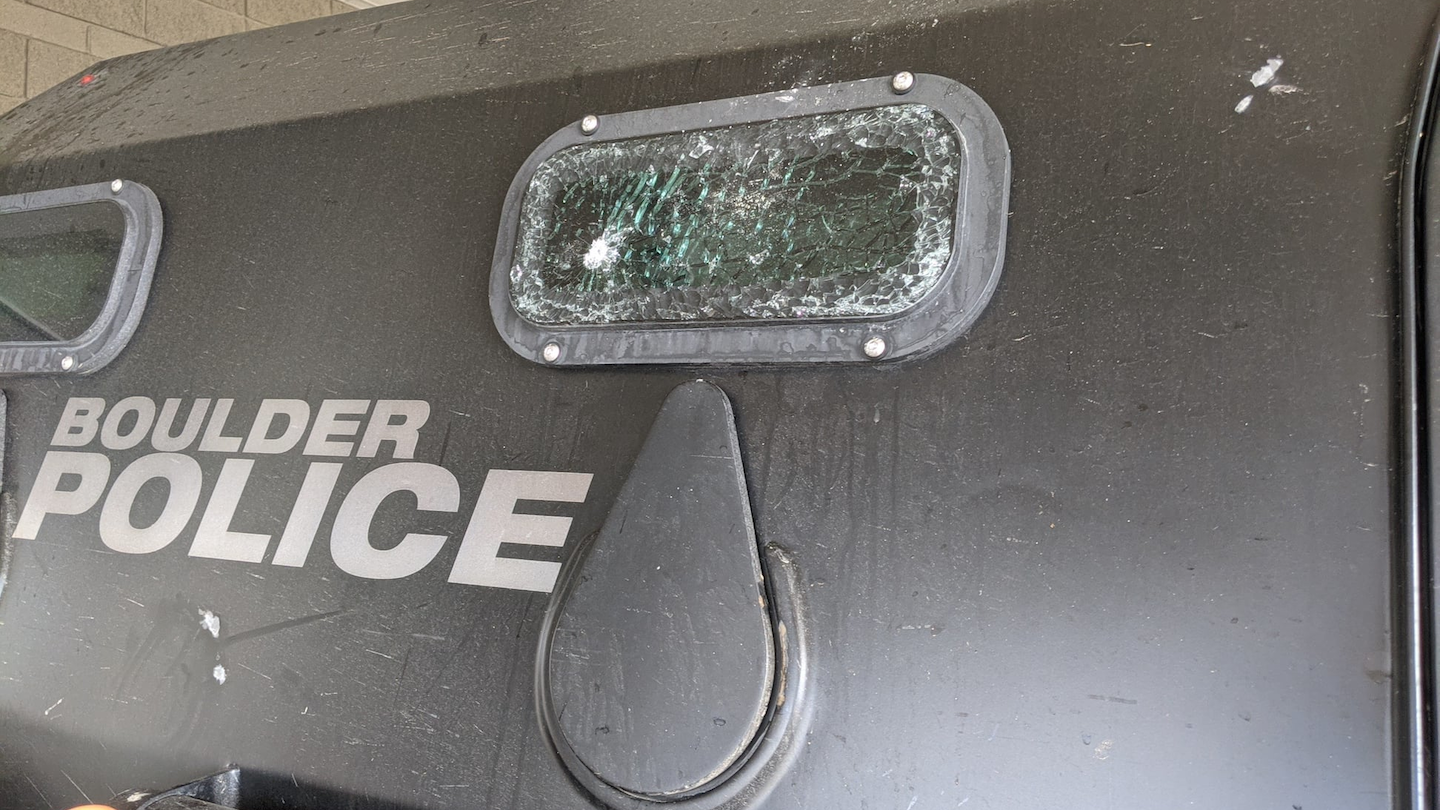 Three police officers were minorly injured, while many other cars plus a police vehicle and a Boulder Fire-Rescue engine were damaged.Boulder Police Department

At a Sunday news conference, Boulder District Attorney Michael Dougherty condemned the riots as “selfish and callous,” calling them a “tremendous setback” in the effort to slow the spread of the coronavirus pandemic

” Boulder is better than what we saw on full display last night,” he said.

University of Colorado Boulder Chief Operating Officer Patrick O’Rourke apologized to the campus’ University Hill neighbors, saying that students will be held accountable and that their behavior was “unacceptable on every level.”

O’Rourke said the first steps for the university would be to look at “misconduct against police officers and property destruction.” Then they would look for organizers, then attendees.

Boulder spokesperson Sarah Huntley said in a written statement that a gathering as large as the one Saturday night wouldn’t have been allowed in a residential neighborhood, even without a pandemic.

“All residents of University Hill, including students, have a right to quiet enjoyment of their homes and of shared streets and outdoor spaces,” she wrote. “This conduct was not consistent with that expectation.”

Herold, the police chief, said SWAT officers who were injured after the crowd turned violent Saturday night are in good condition. One was struck in the hand and one in the face, she said, but the officer struck in the face, possibly by a rock, was protected by a gas mask that took most of the blow.

“It could have been much worse,” Herold said.

There were no other reports of injuries, a news release stated.

Boulder police’s response started at 1:30 p.m., when dispatchers began receiving calls about public health order violations and code enforcement responded by giving warnings at house parties in the 800 block of 12th Street, according to a timeline provided in a news release. People were cooperating at that location, according to the timeline.

Just before 5 p.m., police began receiving calls about a large party on 10th Street between Pennsylvania and College. Officers from Boulder’s Neighborhood Impact Team, which regularly patrols the Hill, responded and attempted to disperse the gathering, according to the timeline.

But by 5:40 p.m., the crowd was growing larger and people began pelting the officers with glass bottles. At 5:48 p.m., SWAT was notified and, later, assistance was requested from other law enforcement agencies in the county. 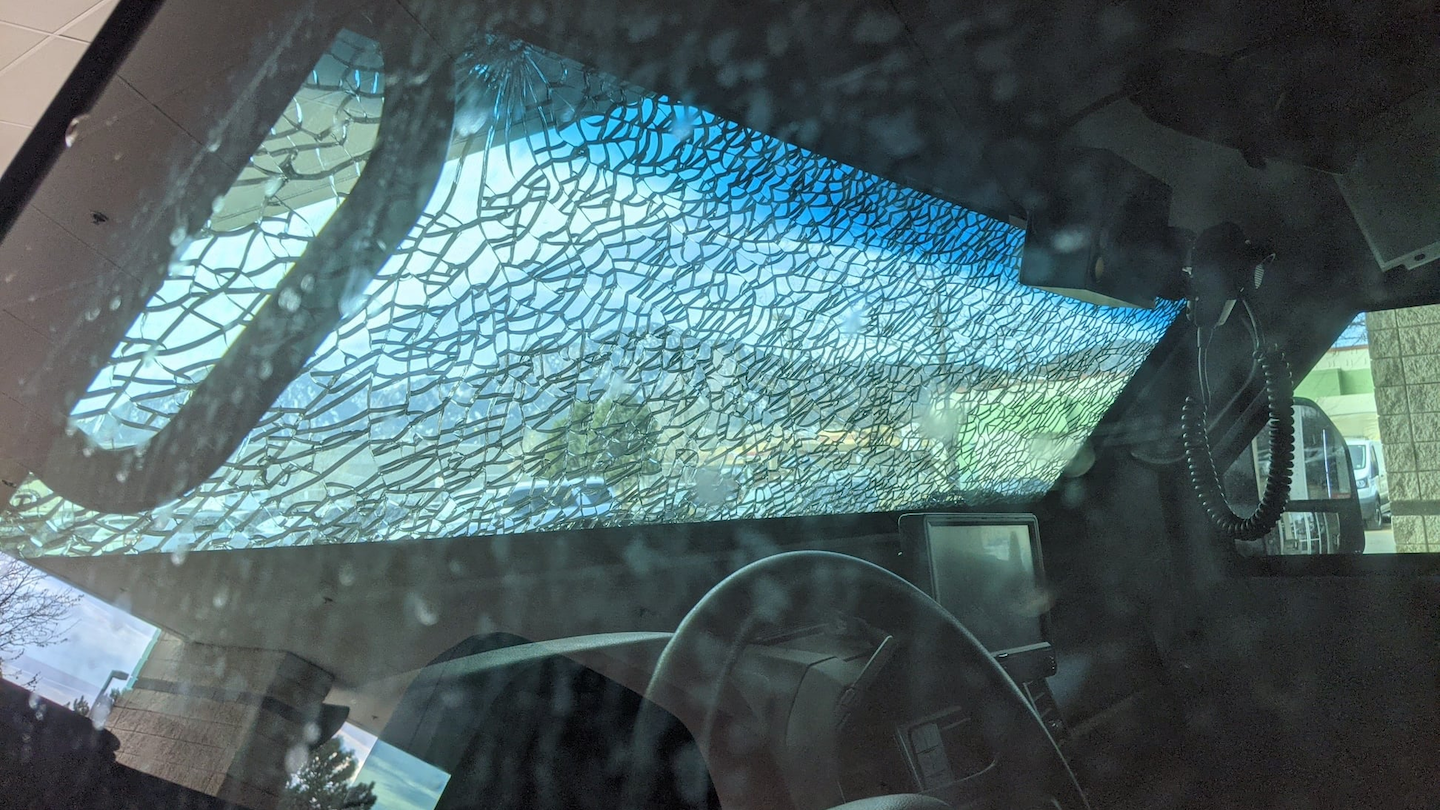 Three police officers were minorly injured, while many other cars plus a police vehicle and a Boulder Fire-Rescue engine were damaged.Boulder Police Department

At about 8 p.m., CU Boulder sent out an alert about the disturbance. At 8:22 p.m., SWAT officers returned to the area in an armored rescue vehicle and announced three times that people needed to leave. During that time, people surrounded the vehicle and threw rocks — some the size of softballs — and bottles at both the vehicle and the officers, injuring the three officers.

In response, officers shot pepperball projectiles at the ground around those causing harm and deployed two canisters of smoke and one canister of tear gas. A change in wind direction diminished the effectiveness of the gas, according to police.

When questioned at the news conference on why the department did not use more force, Herold said, “Obviously, with this crowd, we do not want to agitate it further.”

Because of the size of the crowd, officers were told to leave the immediate area and observe crowd actions. The windshield to the armored vehicle was shattered during this time. The vehicle also sustained “numerous large dents” to the armor and shattered side glass. Officers then used a toned warble noise to clear the crowd. The crowd began to disperse between 8:45 and 9 p.m., according to the timeline.

Herold said officers wrote some citations for public health order violations on Saturday afternoon. She said no one was arrested on scene.

She said it is not a best practice to send officers into crowd, but instead to record the crowd’s actions and make arrests afterward.

“We have excellent body-worn camera video,” she said. “There will be arrests.”

Boulder County Public Health Executive Director Jeff Zayach said participants’ actions Saturday night threaten the safe reopening of the CU Boulder and easing of restrictions for businesses, reversing the ongoing positive trend in decreasing cases the county has seen — just as there was a spike in cases when students returned to campus in September and some held parties.

He said health officials expect to see an increase in coronavirus cases after the party-turned-riot and will look at the data seven to nine days later, including examining the data by age group.

He added that many CU Boulder students have been doing the right thing and cautioned against lumping all students into the same, health order-defiant group.

“To the students who participated in the incident last night: you have embarrassed yourselves and the entire University of Colorado Boulder,” he wrote. “Your actions violated university and community standards at every level.”

Distefano stated that any student who was found to have violated the public health order or who refused to leave when ordered to by law enforcement is subject to university disciplinary action.

He wrote Boulder County Public Health advised students who attended the gathering to quarantine and to get a COVID-19 test on Thursday or Friday. He wrote students who complete a monitoring test will not be published and that that testing information is not shared with Student Conduct & Conflict Resolution.

He wrote that faculty could consult their chairs or deans to discuss temporary schedule changes to in-person learning if they were concerned about exposure risks after Saturday’s incident.

“The violence, vandalism and acts of aggression we saw yesterday are unacceptable and we will do all we can to hold CU students who engaged in them accountable,” he wrote. “I fully support the actions of Chancellor DiStefano and his team and appreciate the efforts of Boulder Police and CU PD to address the situation.”

Some students turn out for cleanup efforts

Sunday morning, the biggest task for those helping was cleaning up piles of glass from broken bottles scattered across sidewalks, lawns and the street.

“It’s kind of horrifying to see,” she said, adding what happened was inexcusable, but possibly a result of students “tipped over the edge” after living with pandemic restrictions for a year.

Dilling added that it was “so sad” to see the destruction and disregard for public health guidelines when “so many students were doing so good and trying so hard.”

CU Boulder sophomore Lila Crank, whose mom also teaches at CU, said she came down to help from north Boulder because “this is our community.”

“It’s nice to see there are actually students here,” she said. “It restores my faith a little.”

Anyone with information, photos or video is asked to contact police by visiting tinyurl.com/UniversityHillDisturbance.