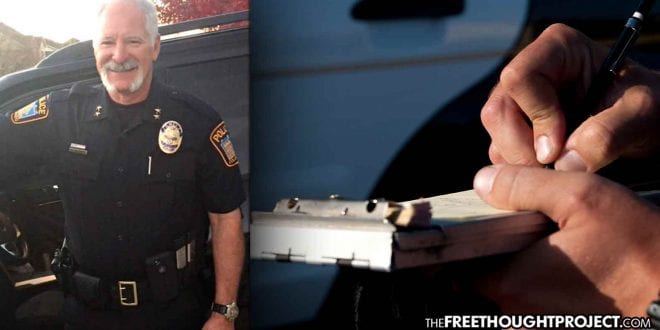 Editor’s Note:  I recently asked a retired police officer from Charlotte Mecklenburg in North Carolina, who just happens to be running for president of the united States what he thinks about quotas during an interview.

Morrison, CO — Most people reading this article know what it is like to have the blue and red lights pop up in your rear view mirror. The last thing going through your mind at this point is the feeling of ‘being protected.’ This feeling comes from the fact that the overwhelming majority of the time a driver sees police lights in their mirror is because they have been targeted for revenue collection—often the result of a quota system—and they are about to be given a ticket, or worse.

Police, we are told, are here to keep us safe and protect us from the bad guys. However, public safety all too often takes a back seat to revenue collection. Time and time again, the Free Thought Project has exposed quota schemes in which officers were punished for not writing enough tickets.

The most recent ticket-writing scheme to be exposed comes of out Morrison, Colorado. Morrison Police Chief George Mumma Jr. was forced to retire last month after a meeting with Town Manager Kara Winters, who according to Mumma complained his officers weren’t aggressive enough in writing traffic tickets.

The act of not aggressively extorting citizens should be praised by officials. However, because they use this legalized extortion to fill their coffers, city officials have become addicted to it.

“It was made clear that our budget was based on traffic revenue,” Mumma told FOX 31.

As FOX 31 reports, Mumma joined the department in Nov. 2017 when he said it had “One of the worst reputations in the Denver Metro area,” because it was known for being a speed trap.

“The officers weren’t trained and weren’t doing a lot of things other than writing tickets,” according to Mumma.

So, he set out to change it, which put a target on his back. Mumma refused to violate the rights of the citizens by preying on them with mandates to issue tickets for face masks, traffic speed and vehicle noise, so they ousted him.

Naturally, the city responded by claiming the issuance of fines for face masks and traffic infractions is for the safety of all citizens.

Winters wrote, “Among the most important was the requirement that all town employees – including our police officers – consistently wear face masks in public places. We also were not aligned with respect to the board’s mandate that the department more effectively control traffic speeds and vehicle noise throughout the town.”

“Usually an agency has some other form of revenue (besides traffic citations) coming in that addresses the police department,” said Mumma who said he was never comfortable with the fact Morrison Police received 100% of its revenue from traffic tickets, “It’s an ethical issue for me.”

Mumma was celebrated by his department when he came in as he allocated more officers to solving actual crimes while leaving just three cops to extort citizens.

A letter sent by the Morrison Police Department to the board of trustees said, “Chief Mumma is a man of high ethics and standards,” adding his “retirement has been forced without basis” before asking for Mumma to “resume his role as chief of police, effectively immediately.”

“I’ve never been so proud of a group as I have these guys,” Mumma said of his former department.

Mumma is the cop that most towns want as their chief. However, because government is dependent upon the extortion of citizens for survival, his role is seen as undesirable by city officials. Therein lies the source for predatory policing.

Mandating that officers issue citations and make arrests is nothing close to “protecting and serving.” In fact, it’s quite the opposite.

Requiring a minimum number of citations forces conflict and potentially hostile interactions in situations where there would otherwise be no conflict.

It truly forces police officers to create criminals out of innocent people in order to generate revenue, or they face losing their jobs.

Sadly, Morrison, Colorado is not some isolated incident. For years, TFTP has reported on these quota systems from coast to coast. As we just reported in June, the town of Ridgetop, Tenn. fired its entire police department after they refused to enforce an illegal quota scheme to line the pockets of city officials. If you truly want a glimpse into the mandated revenue collection schemes across the country and the penalties cops face for exposing them, take a look through our archives, here.