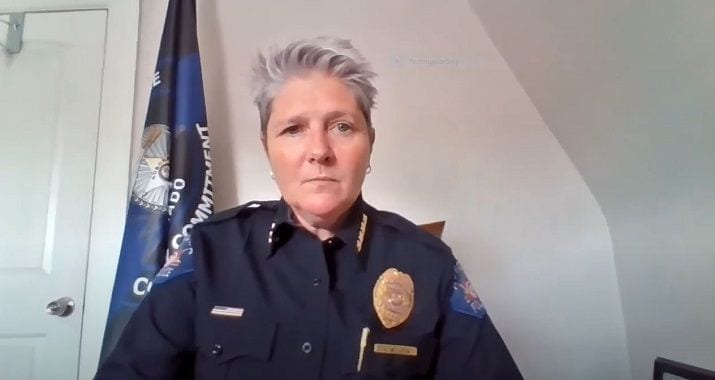 Last month we looked at the shocking story of a felon going on a violent rampage at an apartment complex in Aurora, Colorado. Robert Thompson had been exposing himself to young girls, destroying property and threatening the residents. That fact that Thompson was engaging in this behavior wasn’t really the shocking part. He had a lengthy rap sheet and a history of drug abuse. What was appalling was the fact that the Aurora Police showed up twice on two consecutive days in response to 911 calls and both times decided to “stand down” and leave the scene without taking Thompson into custody. That decision was reportedly made to “avoid a confrontation” that might have ended in the use of force by the police.

Well, it’s happened again, also in Aurora. Back on September 24th, the Aurora PD SWAT team was dispatched to the home of 39-year-old Eric Burns as part of a “felony child abuse investigation.” Burns already had a warrant out on domestic violence charges and was believed to have assaulted his son and abused his young daughter. He additionally was wanted for a felony kidnapping warrant in a nearby town. Upon their arrival, a standoff ensued. Police believed that Burns was armed and they began negotiating for his surrender. They did manage to convince the suspect to send out his his 6-year-old daughter, but after that no progress was made. Then, after a few hours, records reveal that the cops made a “decision to vacate.” They just left without arresting Burns or getting the son out of the house. Why? A statement the PD released sounded awfully familiar. (CBS Denver)

The department declined to be interviewed but released a statement saying, “Members of our community and across the nation have made it very clear that they want their police department to respond differently to some incidents, particularly when there is a possibility of using serious force against a subject.” The statement went on to say “avoiding unnecessary confrontations was now a top priority for the department.”

“Sometimes this means walking away from a situation and utilizing investigative resources to apprehend persons at a later time,” said the APD statement.

This concept of “walking away and apprehending persons at a later time” hasn’t worked out so well thus far. The police have been unable to locate Burns since the standoff on September 24th and he remains on the loose. Some neighbors interviewed by CBS were outraged that the cops would simply leave a wanted felon in their neighborhood and go back to their barracks. Should we be surprised?

So why does this keep happening? I did a little digging and found that in August, shortly before these “stand down” events began unfolding, the city’s acting Police Chief had been officially promoted to the role by the City Council. Vanessa Wilson had been tapped for the position earlier when her predecessor had been forced out following the death of Elijah McClain, a Black man who had been put in a chokehold while in police custody.

Upon assuming the role, Chief Wilson issued a number of apologies and assurances that she was going to make sure the Aurora Police are “an active and engaged part of this community.”

“We will be a transparent partner dedicated to making Aurora a safer city for all, with respect for our diversity, an embrace of unity, and continual conversation about how we can do better,” Wilson said.

I’m getting the feeling that there are some new marching orders in place for the cops ever since Wilson took over as Chief. And they seem to involve instructing her cops to avoid any possibility of a physical confrontation with suspects, even if it means leaving a potentially armed suspected kidnapper and child abuser free in the community. So is this the sort of “police reform” that activists are calling for during rallies all across the nation? We should be asking the voters of Aurora how much longer they plan on tolerating this sort of leadership.