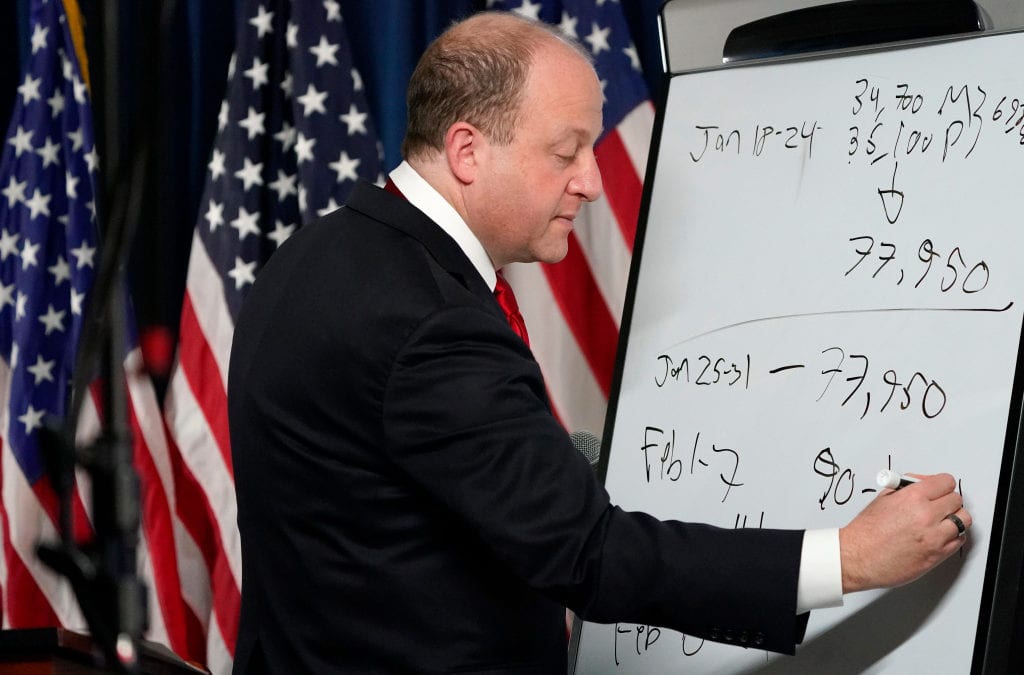 Confident it can prevent mass death and an overwhelmed hospital system moving forward, Colorado is preparing to relax restrictions even in counties where coronavirus cases rates remain high.

On a call Saturday with city and county leaders, state officials presented a new guideline for more lenient county-level rules, with more changes planned for mid-2021.

The changes will allow for greater economic and social freedoms even if counties have higher rates of virus transmission. This reflects the state’s confidence that it can avoid overwhelming hospitals with cases, as the oldest and most at-risk populations of Colorado are gradually being vaccinated.

According to multiple sources who were on Saturday’s call, but who were not authorized to share the information they received, the draft proposal for Dial 2.0 will lead to an announcement of policy changes from the governor’s office in the next few days, perhaps on Wednesday. Before then, it plans to seek public input.

The state is plotting Dial 3.0 in March, with another possible dial update to follow a few months later.

Colorado has a color-coded dial, ranging from Green (most lenient) to Purple (most severe), which determines capacity levels and social behaviors in counties, depending on the level of virus transmission in those counties. The restrictions that correspond with each color are not set to change in Dial 2.0, but the state does plan to relax the metric requirements.

The current dial also bases restrictions off of 14-day samples, and under Dial 2.0, that’s set to change to seven days — meaning a county could more quickly move up or down the dial as its metrics change.

Colorado is “really trying to get things more open in the state,” Jill Hunsaker Ryan, director of the Colorado Department of Public Health and Environment, told officials on Saturday, according to a source on the call.

The reason for doing this change now, the source said Ryan told officials, is that Colorado is “absolutely going in the right direction as a state.”

“She basically was saying that this is the right time to open up,” a source said of Ryan.

Virus cases remain dangerously high here, with the latest state estimate suggesting 1 in 115 Coloradans is currently contagious with COVID-19. Public health officials are also wary of new and more contagious variants of the virus, some cases of which have been detected in Colorado.

In a press conference Friday, Gov. Jared Polis told reporters that he expects half of Coloradans older than 70 will have been vaccinated by Feb. 8, by which date the state plans to begin vaccinating the 65-69 population. Once the oldest Coloradans are vaccinated, it ends the “crisis phase” of the pandemic. Polis was not on Saturday’s call; he said he was being vaccinated today.

Local officials were given a chance to ask questions and offer feedback, and one source on the call said that, “Generally speaking, we understand why these changes are being made. … We all have a lot of questions, centering around two things: one, understanding how to keep our communities safe, and two, how to give our businesses as much freedom as possible.”

Colorado already changed the dial once, adding Level Purple in November, amid a spike in cases and deaths. The state hasn’t always abided by its own rules, sometimes allowing flexibility for counties when the metrics didn’t justify it.

Additionally, Polis has announced numerous changes to the state’s vaccine priority list, which now features six tiers as opposed to the original three.

State officials briefed and solicited feedback Saturday from county and city leaders, and public health directors, and will be seeking input from the public through an online survey. The proposal discussed Saturday is a draft as of now, but it’s expected to be solidified early next week.