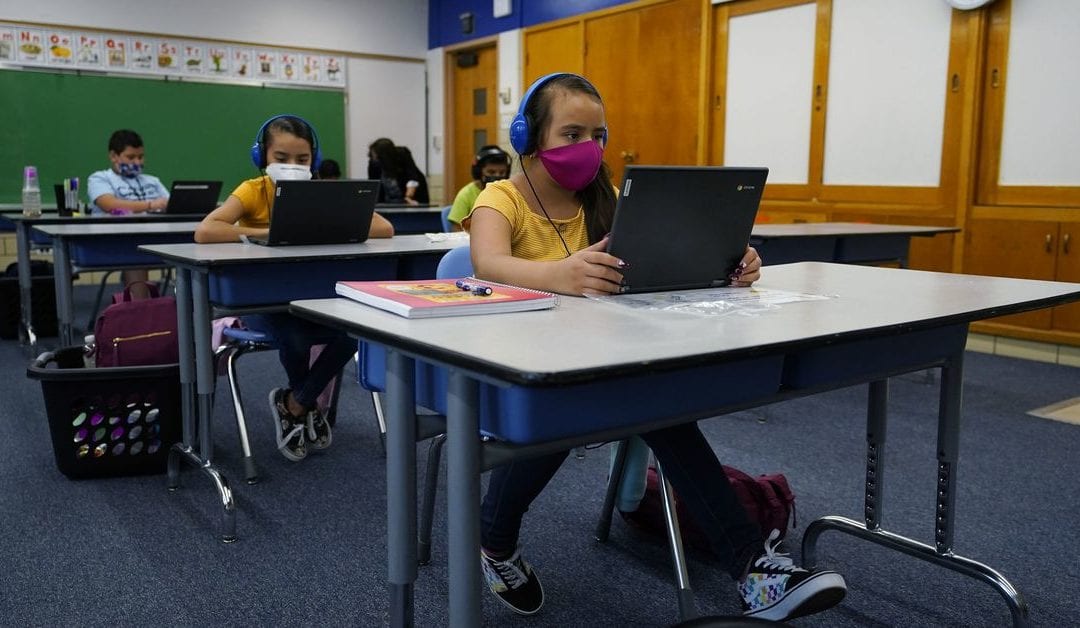 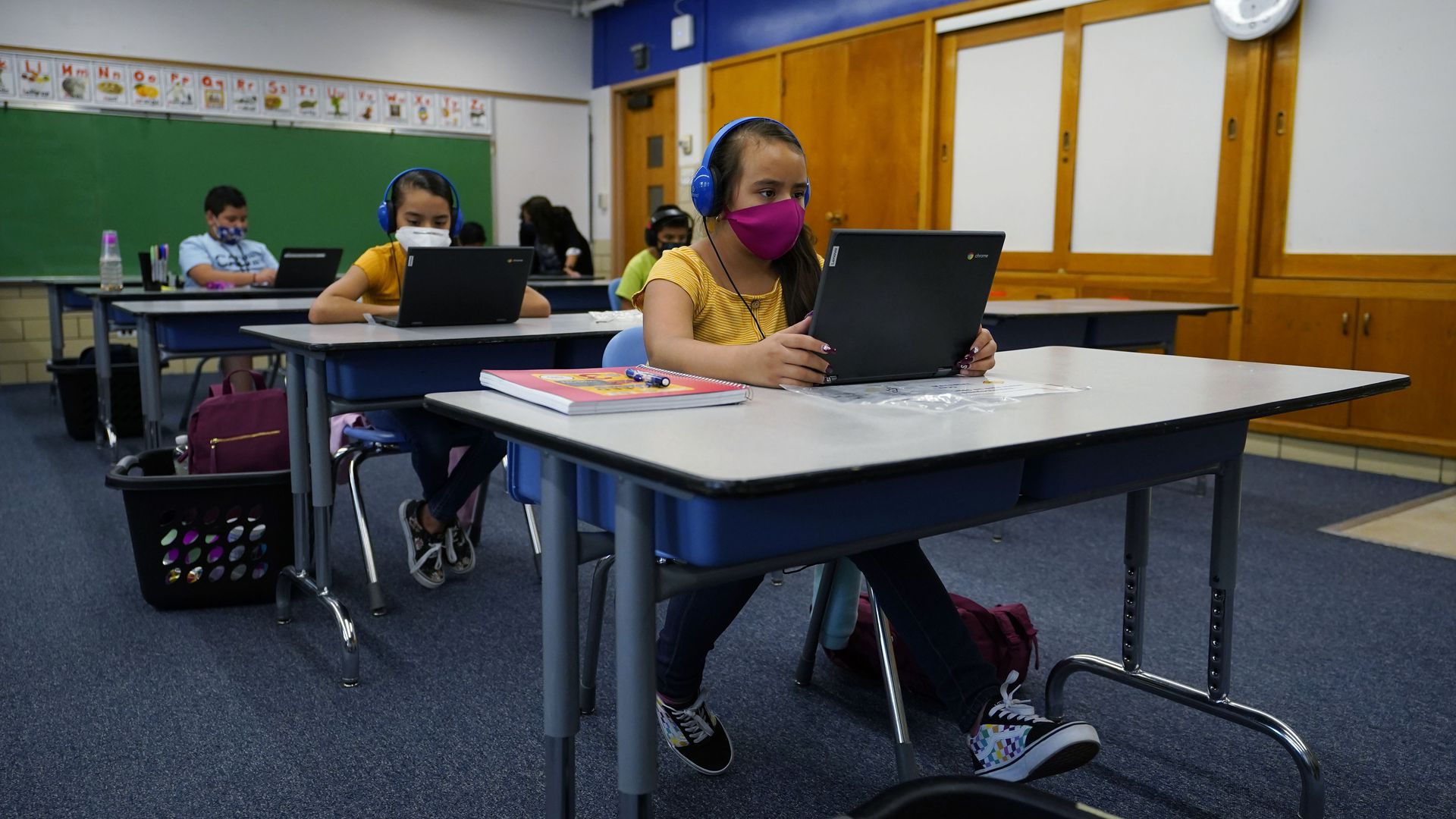 Denver Public Schools has brought most elementary students back to the classroom, but middle and high school students are still learning from home. | AP Photo/David Zalubowski

Colorado’s pediatricians and educators are urging Gov. Jared Polis to take stronger action to slow the spread of the coronavirus in order to preserve the possibility of students attending school in person.

“As community spread increases, in-person school will be less and less feasible if concerted efforts are not made to prioritize classrooms across our state now,” members of the Colorado chapter of the American Academy of Pediatrics, the state’s two teachers unions, and other organizations, wrote in a letter to Polis.

The letter was sent Tuesday, the same day that Polis launched a new campaign called “Step Up Colorado” to encourage people to limit social gatherings and increase their use of masks as the number of cases and hospitalizations rose at alarming rates. In a press conference, Polis deflected questions about whether he would impose new statewide public health restrictions and expressed confidence that Coloradans would exercise personal responsibility.

“Coloradans care a lot about their families, their loved ones, their own lives, and that’s why I’m confident we’ll do better,” he said.

The day before, Adams 12 Five Star Schools and Aurora Public Schools both announced older students would learn from home, and two days later, Aurora decided that nearly all its students would go back online. Denver Public Schools, the state’s largest district, is keeping middle and high school students online at least until Nov. 9, and Adams 14, a suburban district that serves a high percentage of students in poverty and English language learners, is remaining remote until the end of the calendar year. On Friday, the small Sheridan district, where many students are homeless, said students would go remote for a week.

Asked about the school closures, Polis emphasized that “most kids are back in school.” But tens of thousands of students still don’t have access to the classroom, and tens of thousands more are learning at home because their families don’t feel safe. While many experts say that school buildings are relatively low risk, high rates of community transmission increase the likelihood of disruptive quarantines and spread in schools.

Rusha Lev, a Denver pediatrician and Jefferson County parent who signed the letter, said she sees the impact of school closures on her patients every day, in the form of depression, anxiety, poor nutrition, social isolation, and more.

“I know the benefits that school provides are immeasurable, and the students who are not in school, even the middle and high school students, are really suffering,” she said. “School for kids is one of the most important things, and if we don’t get this under control, many children are not going to get the benefit.”

In addition to the pediatric association, the letter was signed by the heads of the Colorado Medical Society; the state’s two teachers unions, the Colorado Education Association and the American Federation of Teachers’ Colorado chapter; and the Colorado Association for School-Based Health Care.

Polis has repeatedly said that he believes personal behavior plays a much greater role on the trajectory of the coronavirus than policy directives. Nonetheless, a previous spike in July subsided after Polis instituted a statewide mask mandate, closed bars, and rolled back last call to 10 p.m. at restaurants and bars that continued to operate under exemptions.

“Policy works,” he said Tuesday. “It’s about 20% of the equation. Eighty percent is people’s endurance, caution, compliance, following science-based guidelines that allow them to put food on the table and get the socialization they need to get through this.”

Public health officials have linked much of this current wave to small social gatherings at homes. At the same time, the state has eased restrictions on many businesses and activities. Without explicitly stating what activities should be restricted, the letter urges the governor to impose more limits to protect school operations.

“Please take action now by implementing restrictions on social gathering and places or activities where we know COVID to be spreading more rapidly,” the letter states. “The time to act in the best interest of Colorado students and educators is today, rather than in a few more weeks knowing the prolonged incubation period of the virus. By then, we may be in an even more untenable position to work towards safe, in-person learning.”

Lev said she and her fellow pediatricians don’t want to overstep their expertise by making policy recommendations, and they respect the complex trade-offs involved. At the same time, it’s frustrating to see many higher-risk activities continue even as rising case counts lead district administrators to close schools or not open them.

Pediatricians are also starting to see more children with COVID in their practices, including some who are require hospitalization, she said.

“We advocate for kids and teachers and school, which we think is the most important thing our society provides,” she said. “We don’t have the luxury of doing everything at once. We have to think about what we care about the most and how we can maintain that, and it will involve sacrifice.”

On Friday, state public health officials issued a new order restricting gatherings to no more than 10 people from two households in all counties in any of the three levels of “Safer at Home,” which applies to most of the state. Counties with the lowest case counts that fall into the least restrictive level, known as “Protect Our Neighbors,” can continue to have larger gatherings.

The order does not apply to restaurants — or schools.