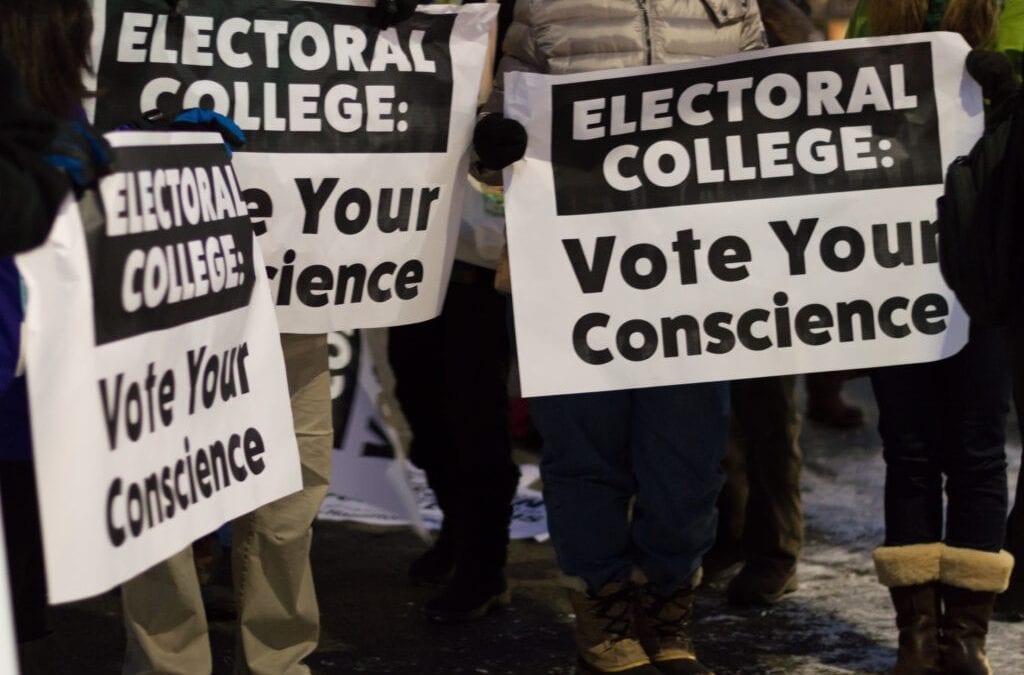 COLORADO- A long standing questions has been why the person who gets the most votes, or the popular vote, does not always win the presidency.

The reason for this is the Electoral College, which is a temporary slate of 538 electors, who are chosen by their state’s political parties. Each elector casts one vote; a presidential candidate needs 270 of these votes to win.

Since the 2016 election, where Democratic presidential nominee Hillary Clinton won the national popular vote, and Donald Trump walked away the President, many have sought to change the way a President is elected in this country.

JUST IN: Colorado has voted to join the National Popular Vote Interstate Compact.

That means Colorado is officially part of the movement to sideline the #ElectoralCollege.#copolitics #election2020 pic.twitter.com/SF782dmVIn

Colorado is joining several other states who have already enacted this into law. According to the National Popular Vote Website:

“The National Popular Vote bill would guarantee the Presidency to the candidate who receives the most popular votes in all 50 states and the District of Columbia.

Voters in Colorado passed the measure with 52.2% of the vote, with 88% of the vote counted, according to the Post.

More Coloradans voted in this election than in any previous election in our state’s history! Over 3.3 million Coloradans voted, with an 86.8% turnout among active registered voters. And even more ballots will be processed in the coming days!

“The national popular vote is a very straightforward concept,”

“One person should always equal one vote, and the presidential candidate who gets the most votes should win the election.”

But the close margin by which the measure passed suggested that Coloradans did not overwhelmingly support the bill, Fox News reported.

“They were tricked by California billionaires, who spent millions of dollars to buy our votes for president,”

“Colorado’s votes should be decided by Coloradans.”

He went on to say:

In 2019, Colorado lawmakers decided to assign the state’s Electoral College votes to the winner of the national popular vote in a presidential election.

According to Fox News, the measure was put on the ballot by grassroots conservatives seeking to reverse the decision and ban Colorado’s participation in such a strategy. The plan seemingly backfired as Colorado became the 16th state to join the National Popular Vote Interstate Compact.

In the current election between President Donald Trump and Former Vice President Joe Biden, Biden is currently winning the popular vote, however because the country is waiting on several key battleground states to count their votes, we are at a standstill with who the winner will be.

In February, Virginia voted to give their electoral votes to whomever wins the popular vote.

RICHMOND, VA- The move to get rid of the Electoral College is making more progress than you might be aware of.

Now, Virginia is well on its way to joining several states in awarding their state’s electoral votes toward the winner of the nationwide popular vote – no matter who residents in the state choose as their candidate.

Despite what Virginians may want, their state’s electors may very well defy their constituents’ will due to what residents in other states want.

True democracy has been described as two wolves and a sheep deciding who is for dinner.

When the Electoral College was established as a means to elect the president of the United States, The Founding Fathers saw it as a means to compromise between the duality of a national popular vote and the desires of those residing in various portions of the country.

As of now, HB177 has already passed the Democrat-majority House in Virginia with a 51-46 vote.

If the state Senate should approve the bill, then Virginia will then become a part of what’s known as the National Popular Vote Interstate Compact.

According to the NPVIC’s website, the status of the movement is as follows:

“The National Popular Vote bill will take effect when enacted into law by states possessing 270 electoral votes (a majority of the 538 electoral votes).

While the NPVIC has only secured 196 electoral vote commitments from various states to allocate electoral votes to popular vote winners – Virginia would net the movement another 13. However, the entire notion disregards the duty of elected officials within the states truly adhering to the will of their state’s residents.

What if Trump’s opponent wins Virginia and Trump wins the popular vote, and this bill puts him over 270??? https://t.co/Y9tljKyYWc

According to Virginia’s recently House-passed bill, it states the following:

“Under the compact, Virginia agrees to award its electoral votes to the presidential ticket that receives the most popular votes in all 50 states and the District of Columbia.

The compact goes into effect when states cumulatively possessing a majority of the electoral votes have joined the compact.”

BREAKING: Virginia is Close to becoming The next state to Award it’s state’s electoral votes to the winner of the national popular vote.

THIS IS BIG. Virginia could become the 17th state to do this

You see, state representatives are only willing to potentially defy their own constituents once they can safely usurp their constituents’ will. Because, to be quite frank, no voters within a state will want to keep around elected personas who refuse to hear them out.

Democrat Nevada Governor Steve Sisolak had some choice words for the movement, and also vetoed NPVIC legislation that hit his desk.

Governor Sisolak stated the following about the means to undermine a state’s will:

“Once effective, the National Popular Vote Interstate Compact could diminish the role of smaller states like Nevada in national electoral contests and force Nevada’s electors to side with whoever wins the nationwide popular vote, rather than the candidate Nevadans choose.”

Apparently, that governor just wasn’t having that go down in his state:

“As Nevada’s governor, I am obligated to make such decisions according to my own conscience. In cases like this, where Nevada’s interests could diverge from the interests of large states, I will always stand up for Nevada.”

The reality is that a true democracy is nothing short of “mob rule”, where 51 percent of a populace can choose to deprive the 49 percent of whatever they so desire.

The Electoral College was a means so that every demographic could be listened to considered – from minority populaces to heavily populated areas.

If a true to form democracy was established within the United States, it would threaten the rights of many individuals. The NPVIC, if achieved, would be a potential step in that direction – which should concern everyone who cherishes their individual liberties.

Want to make sure you never miss a story from Law Enforcement Today?  With so much “stuff” happening in the world on social media, it’s easy for things to get lost.
Make sure you click “following” and then click “see first” so you don’t miss a thing!  (See image below.)  Thanks for being a part of the LET family!

The post Colorado passes resolution that will give the state’s electoral votes to the winner of the popular vote appeared first on Law Enforcement Today.