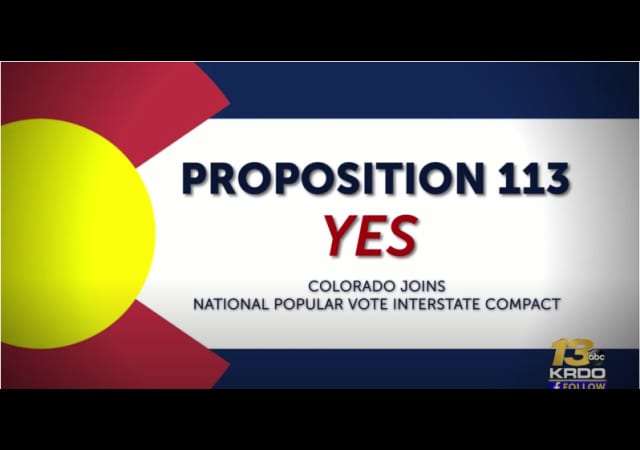 Colorado passed Proposition 113, which will award the state’s electoral votes to the candidate who wins the popular vote.

The idea came to the forefront after the 2000 fiasco but really picked up in 2016 after President Donald Trump thumped failed Democrat presidential candidate Hillary Clinton.

She got the popular vote, but he won the electoral vote.

The National Popular Vote nonprofit group has 16 states behind the idea, which take up 196 electoral votes.

The ballot measure had 52.2% support Wednesday evening with 88% of the vote counted statewide.

Even as The Associated Press was declaring that Prop 113 had passed, 2020 Democratic presidential candidate Joe Biden held an approximately 3 million-vote lead over President Donald Trump in the popular vote nationwide while still trying to nail down the 270 votes needed in the Electoral College. It’s too soon to call the 2020 presidential election, but Hillary Clinton lost to Trump in the Electoral College in 2016 despite finishing with a similar lead in the popular vote.

But Frank McNulty, a Republican former state House speaker who served as an adviser to the anti-Prop 113 group, said the close margin indicates “that Coloradans are clearly divided on the issue.”

“They were tricked by California billionaires, who spent millions of dollars to buy our votes for president,” he said. “Colorado’s votes should be decided by Coloradans. This is going to reduce Colorado’s clout, and it’s going to reduce our influence on issues like transportation, water, health care and funding for our military bases.”

State Sen. Michael Foote stressed that the idea forces candidates to think about everyone in the country and not just swing states.

That’s ironic because Colorado is somewhat a swing state.

Maybe Foote should remind people within the Democrat Party to actually visit states. Hillary thought she had it in the bag and brushed off states while Trump traveled everywhere to pick up support. Joe Biden hid in his basement in 2020 while Trump traveled to many states a few days before the election.


Donations tax deductible
to the full extent allowed by law.