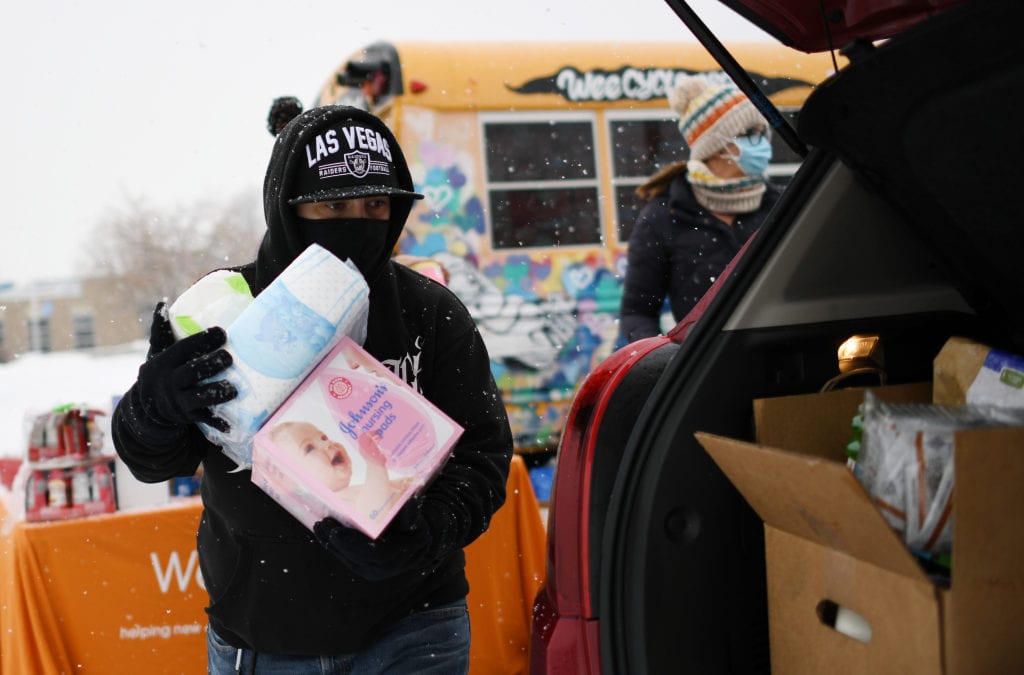 Parents in Colorado are filling plastic grocery bags with toilet paper and taping them to their babies as makeshift diapers because they are not able to afford essentials, forcing them to try ineffective and unhygienic alternatives so they can pay for food and housing.

Mothers and fathers also are washing soiled diapers for reuse or waiting longer to change their babies as they struggle in a economy destroyed by a pandemic, people who work in Colorado diaper banks said.

“When you don’t have diapers you do desperate things,” said Lorna McLean-Thomas, warehouse and volunteer coordinator at Denver-area diaper bank Weecycle. “Families are not eating so the baby can have diapers and formula.”

In February, The Nappie Project, a diaper bank serving the Fort Collins area, gave out about 13,800 diapers. By November, that number rose to 47,800. Weecycle provided more than 1 million diapers in 2020, more than quadrupling the 250,000 diapers the organization distributed in 2019.

“And we’re still not fully meeting the need,” said Jan Touslee, a founder of the The Nappie Project.

Many of the families the two organizations are serving have never relied on food and diaper banks before, McLean-Thomas and Touslee said. Those families include adults who lost work due to the pandemic or are working but not making enough money to pay for essentials. Many clients of Weecycle worked in the service industry or at large event centers, such as Ball Arena.

It costs at least $80 a month to diaper a child, according to the National Diaper Bank Network.

That’s money that Ruby Perez just doesn’t have. Perez lost her full-time job at a small Denver hardware store when the business closed in the spring because of COVID-19, she said. She loved that job because she was allowed to bring her kids — ages 2, 5, 12 and 17 — to the shop while she worked.

Without work, it’s hard for the single mom to pay for childcare so she can look for a job. Without a job, it’s hard to pay for food and diapers. Perez applied for food stamps for the first time in her life, but is waiting to be approved. For a while, the family had some income from her 17-year-old’s part-time job at a thrift store, but his hours slowly dwindled to none.

So on Tuesday, Perez strapped her toddler into the car and drove to a drive-through food and diaper giveaway, organized by Weecyle and a food redistribution organization outside a church in Denver’s Villa Park neighborhood. More than 60 cars wrapped around the block and onto nearby West Sixth Avenue.

Perez was especially excited about the possibility of getting some diapers, which she estimates she spends at least $100 a month to purchase. That expense has grown because she can no longer buy in bulk after she canceled her Sam’s Club membership to save money.

“They’re so expensive,” she said. “I gotta go to whatever help is available.”

The vast majority of government income and food assistance programs do not allow people to use the money for diapers, said Joanne Samuel Goldblum, CEO of the National Diaper Bank Network.

“It’s safe to say this is a problem that cannot be dealt with through charity and corporate support, there needs to be a governmental response,” she said.

The crushing growth in diaper need is not unique to Colorado, Goldblum said. Across the country, diaper banks are reporting distressing increase in demand.

“We’re continually hearing they’re running out of diapers,” she said.

Even before the pandemic, about a third of U.S. families struggled with diaper need, according to the National Diaper Bank Network. The need also perfectly illustrates the cycle of poverty that ensnares so many families.

Reusable cloth diapers might be an option for some families, but often laundromats do not allow people to wash diapers. Many child care programs require parents to provide disposable diapers. If a parent can’t afford to pay for child care or diapers, they may not be able to work. Without work, they cannot afford diapers. And if a child gets a urinary tract infection or other illness from wearing dirty diapers, families have to lose work to care for the child while also shouldering medical costs.

“Families at food banks would cry when I would say, ‘You can have diapers,’” Touslee said.

Colorado families’ situations will only worsen when state and federal eviction moratoriums expire, Touslee said. Families who owe rent will be forced to pay those debts or risk losing their housing, leaving less cash for food, diapers and other necessities.

“For these families, this need will not go away quickly,” McLean-Thomas said. “A vaccine will not fix this. We have a long haul to get people back to self sufficiency.”