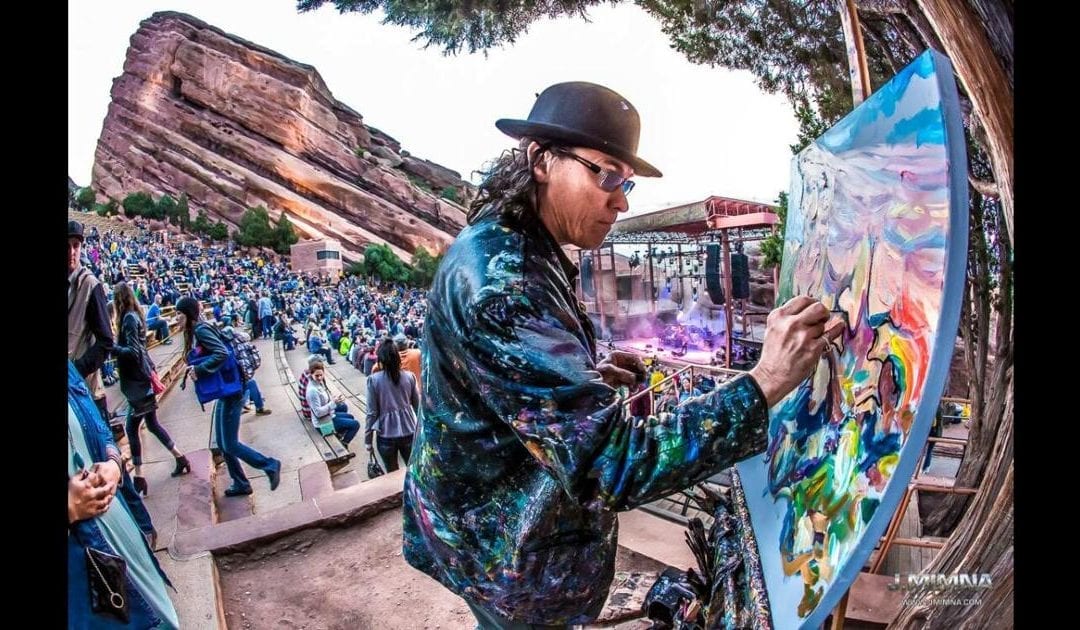 Rows and rows away from the stage at Red Rocks, there’s another show going on.

Tucked to the side of the amphitheater, a man wearing a fedora and a paint-splattered shirt stands in front of a blank canvas.

As the music starts, so does Scramble Campbell’s paintbrush. As the show goes, he fills the canvas with electric colors and an electric, sometimes out-of-this-world, portrayal of what’s happening around him. He paints the musicians and the natural rock formations there and what the colors of that sky looked like that particular night.

But his paintings never look like a still life of a concert or resemble a photograph. They look more like the coolest concert you’ve ever been to.

As a younger man, Scramble, whose given first name is Keith, was inspired to start drawing by surrealist Salvador Dali. There remains an element of that in his painting today.

He calls it “Scramble vision.” And it’s made the artist an icon connected to the iconic venue.

Scramble got into what he calls “plein air on steroids” 30 years ago, after he figured out the traditional art world wasn’t his scene. He found his people at night clubs and festivals and Grateful Dead concerts. He started live-painting concerts in 1990 and attended his first Red Rocks show featuring Widespread Panic in 2000.

It was love at first sight.

“There’s just nothing else like Red Rocks,” he says.

He and his wife, Shay, who is also an artist, moved to Colorado in 2004 in part to be closer to the venue. For three years, they lived in a house on the park’s property. Scramble became a tour guide there.

In a typical year, he paints at least 30 shows per season. If he’s tight with the band, he gets a pass. Otherwise, he’ll buy a ticket to a show he wants to paint. He doesn’t paint bands he doesn’t like.

His go-to is jam bands, such as Phish or Widespread Panic.

“Jam bands are known for never playing the same set list twice,” he said. “That’s how I am.”

2019’s Fourth of July concert at Red Rocks marked his 500th painting there. It’s his largest body of work and most recognized.

Even though the setting is the same, none of his paintings look alike.

“I just try to make it different every time,” he said. “You don’t wanna do the same painting over and over. That’s not me.”

He makes sure of it. He paints the band up close or far away or at an angle. Sometimes the rock formations are adorned with rainbowlike colors. If there was a beautiful sunset and it rained that night, he’ll include both elements in his painting.

“You’re capturing a whole night in one picture,” he said.

When Dolly Parton played the venue for the first time, he decided to paint a close-up version of the singer instead of his view of her from stage.

“You knew you were seeing something special,” he said. “So you don’t want her to look like a stick figure.”

He painted The Avett Brothers when the band was an opening act and again when they played back-to-back shows at Red Rocks. He’s painted at every theater in the Denver area. He’s painted String Cheese Incident, a Colorado favorite, probably 200 times.

But anything at Red Rocks is his favorite, “because it’s the best venue in the world,” he says.

“It’s not so much a job,” Scramble said. “That old concept of do what you love and you’ll never work a day in your life applies here.”

He’s more proud of things like this: A couple who went to a Red Rocks show for their first date 10 years ago just bought the painting from that night for an anniversary gift.

“What I’m doing is capturing a moment in time,” he said. “There’s only one shot that encompasses the whole night. And it’s mine.”

“I guess,” he adds, rather casually. “I capture time.”

While he’s doing that, he’s having a blast listening to music he loves and frantically putting that feeling on canvas.

“They don’t call me Scramble for nothing,” he said. “I’m kind of all over the place.”

When the show’s almost over, right before the encore, Scramble’s painting is usually done. That’s when he lifts up his creation so the crowd can see it. The feeling — with everyone clapping for his painting that he just completed — reminds him of why he first fell in love with this place.

“You’re getting to show the crowd that just experienced what you experienced,” he said. “Everything is on the canvas. And they feel it.”