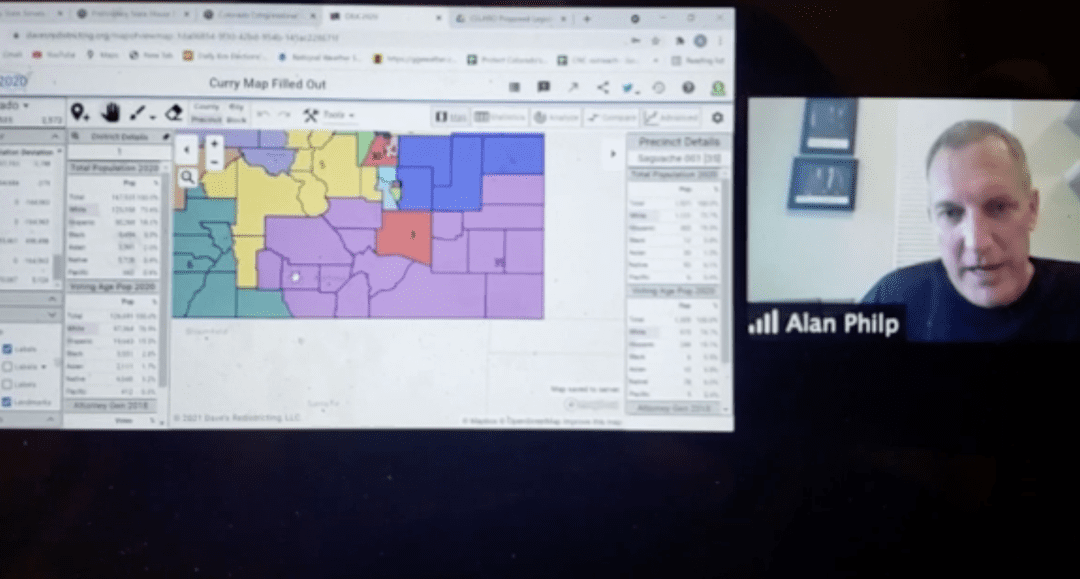 The Farm Bureau president Carlyle Currier told the state’s independent redistricting commissioners on Aug. 19 that he was there to present his organization’s map proposal, which aligned with their advocacy for “the interests of farmers, ranchers and real Colorado.” And he told the commissioners that his submission came solely from his group: “I want to note that these maps were created by our staff, and only myself and our vice president have reviewed them.”

But in a video training recorded two days earlier on Aug. 17 for a group of Pueblo County Republicans, Colorado Neighborhood Coalition’s registered lobbyist Alan Philp presented a map that he said in the video he expected would be presented at the Pueblo hearing, two days later.

“This is a map of Southern Colorado that is probably similar to one that you’ll see on Friday that is being proposed by someone,” Philp said in the video training. “I don’t know that he has agreed to do it yet, so I’m not going to share his name, but it keeps Pueblo County whole, and then the rest of Southern Colorado — East of the San Juans, and Wolf Creek Pass, the San Luis Valley, Fremont, into the lower Ark — makes for a perfect Southern Colorado District. So that’s kind of what we’re hoping it ends up as.”

“He gave us some help in looking through the numbers and what we needed to know,” Currier told The Gazette. “He gave us some advice as far as the number crunching. But the original map was mostly drawn by our staff.”

Colorado Neighborhood Coalition never has to disclose where its funding comes from because of its 501c4 nonprofit IRS status. When the same kind of groups spend money in elections, they’re called “dark money” groups because of the unlimited anonymous funding permitted.

“CNC is not endorsing Farm Bureau’s maps, but we love that configuration for southern Colorado,” Philp wrote in an email responding to questions about his group’s involvement. But when asked about submitting the maps without telling the commissioners his group helped draft them, he said: “They are free to ask.”

The complaint targeting Colorado Neighborhood Coalition, which was filed with the Colorado secretary of state last week by Mark Grueskin, a Democratic operative who is also registered as a redistricting lobbyist for a 501c4 nonprofit organization called Fair Lines Colorado, argues that Colorado Neighborhood Coalition has been involved in lobbying the commissioners in ways not reflected in the group’s public lobbying disclosures.

The change to Colorado’s redistricting process removed the task from the hands of elected officials who could redraw maps to favor themselves or their party, and put it into the hands of an even mix of Republican, Democratic and party-unaffiliated Colorado citizens. The change also came with requirements for transparency and public participation, requiring the redistricting commissioners to do their business in public hearings and collect and use public input for the map drawing, in addition to requiring paid efforts to influence the process to be disclosed under the state’s lobbying disclosure system.

Grueskin’s lobbying disclosures list more than a dozen interactions with the commissions.

Grueskin’s complaint argues that other paid employees of the group, former Colorado House Speaker Frank McNulty and former Colorado House and Senate member Greg Brophy, both Republicans, need to be registered as lobbyists, citing interactions they had with commissioners. The complaint also says more detailed disclosures are required than what Philp has provided so far.

Amendments Y and Z defined redistricting lobbying: “Contract or receive compensation for advocating to the commission, to one or more commissioners, or to nonpartisan staff for the adoption or rejection of any map, amendment to a map, mapping approach or manner of compliance with any of the mapping criteria.”

In July, a political consulting firm run by high-profile Democratic operative Rick Ridder registered itself retroactively as a redistricting lobbyist, after The Gazette began reporting on how one of the firm’s employees coached an individual on how to testify to the commission.

Colorado Neighborhood Coalition has said that their lobbying disclosure, which lists Alan Philp as their registered lobbyist, is sufficient and that no additional disclosures are required.

The map shown in Philp’s Aug. 17 video training was titled “Curry Map Filled Out,” and Philp said the concept behind the map came originally from Kathleen Curry, a former state lawmaker. Curry notably changed her party registration from Democratic to unaffiliated in 2009, after serving five years as a Democrat representing Gunnison, Eagle, Garfield, Hinsdale and Pitkin Counties. Though she ran again as an unaffiliated candidate, Curry never won re-election again, and has since advocated for the idea that party-unaffiliated candidates should hold many elected offices, since party-unaffiliated voters outnumber Democrats and Republicans in Colorado.

In 2018 the Colorado Farm Bureau served as the public face for Amendment 74, an unsuccessful ballot measure funded by the oil & gas industry that was designed to counter another ballot measure that would have established new restrictions on oil and gas drilling operations.

Philp said he’s helped others draw maps, including maps he said he doesn’t like, but he said it would be inappropriate to provide a list of all the groups or individuals he’s worked with.

“It’s dozens, and I have no idea which were used and which weren’t,” Philp explained. “I tell everyone the same thing I told the commission: We are here to help, but the map is yours, not ours. And we tell them they are free to tell anyone that we helped if they want. That’s exactly what I told the Farm Bureau.”

Colorado Neighborhood Coalition, first registered in 2019 and run by Republican political operatives, has said its goal is to ensure that the current redistricting cycle follows the constitutional requirements for the process.

Philp has told the redistricting commissions that the group is not funded by Republicans. However, Rep. Matt Soper, a Delta Republican, had said in another recorded video training in July, in which he was coaching people to give public testimony to covertly help incumbent Republicans, that Colorado Neighborhood Coalition had been hired by the state’s Republican apparatus to help advance the party’s interests, before later saying that he was wrong. Colorado Neighborhood Coalition also said Soper was wrong, and reiterated that their 501c4 nonprofit organization is funded by Republicans.