Colorado: Non-Muslims try to destroy Islam by ‘sugarcoating, watering it down, accept LGBT…HIYZ…music is okay’ 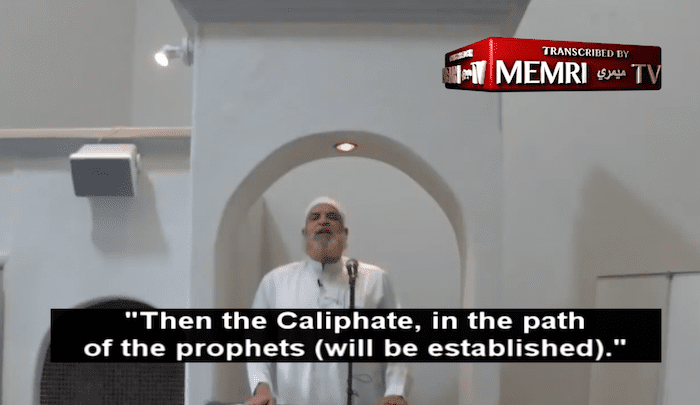 On October 9, 2020, Colorado Imam Karim Abu Zaid delivered a sermon in which he responded to French President Emmanuel Macron’s recent statement that Islam is in crisis. In the Friday sermon at the Colorado Muslims Community Center in Aurora, Colorado, Abu Zaid claimed that non-Muslims have tried to implement a plot to destroy Islam by bringing down the Caliphate and by occupying Muslim countries. He elaborated that the non-Muslims have been repelled, but that they have left puppets in these countries to carry out their schemes.

Furthermore, Abu Zaid claimed that non-Muslims want to destroy Islam by introducing a “watered-down” or “sugar-coated” version of Islam that accepts such things as music and the LGBTQ community. Abu Zaid said that if Macron were to allow the Muslims to implement his “thing” of democracy and elections, he would see that Islam would prevail, like the Muslim Brotherhood did in Egypt and like Hamas did in Gaza. He predicted that the Caliphate would return, and praised Turkey for being the only place that defends Islam and Muslims. The sermon was streamed live on Abu Zaid’s YouTube channel. It was also uploaded to the mosque’s channel and to other American Islamic YouTube channels.

Karim Abu Zaid: “If just 10% of the plotting the non-Muslims — the hypocrites — are doing against Islam were to be applied to another religion on the face of this Earth, it would disappear. It would disappear. You cannot imagine the amount of plotting and scheming.

“The response [to the French President Macron] comes from the place where they worked hard to make Islam disappear. Can you imagine? In Turkey, there was no call to prayer allowed for 100 years, no hijab allowed for 100 years, and no Arabic [taught] in schools for 100 years. A hundred years… Look… The only place on the face of this Earth now that protects Islam and speaks on the welfare of Muslims, is this place [Turkey].

“They are doing it in the Muslim world. How many of us hear now, that the U.S. is asking Saudi Arabia to change the curriculum?

“They cannot remove Islam from the face of this Earth. [They say:] ‘What can we do? Let’s do what we’ve done with Christianity — produce a brand that suits us.’ Sugar coating, watering it down, accept LGBT…HIYZ… [Say that] music is okay… And that is the scheming.

“Oh, Mr. Macron, can you just allow the Muslim world to run your own thing — elections, democracy… Run it and you will see who will win. It happened, in Egypt [with the Muslim Brotherhood] and in Palestine [with Hamas]. No, it is forbidden for… No, we don’t want that.

“Here is the bad news for Mr. Macron, bad news right here: ‘Then the Caliphate, in the path of the prophets [will be established].’

“That the same description will come back again. That is the bad news. That is the crisis, Mr. Macron, you are concerned of. And we feel for you.”