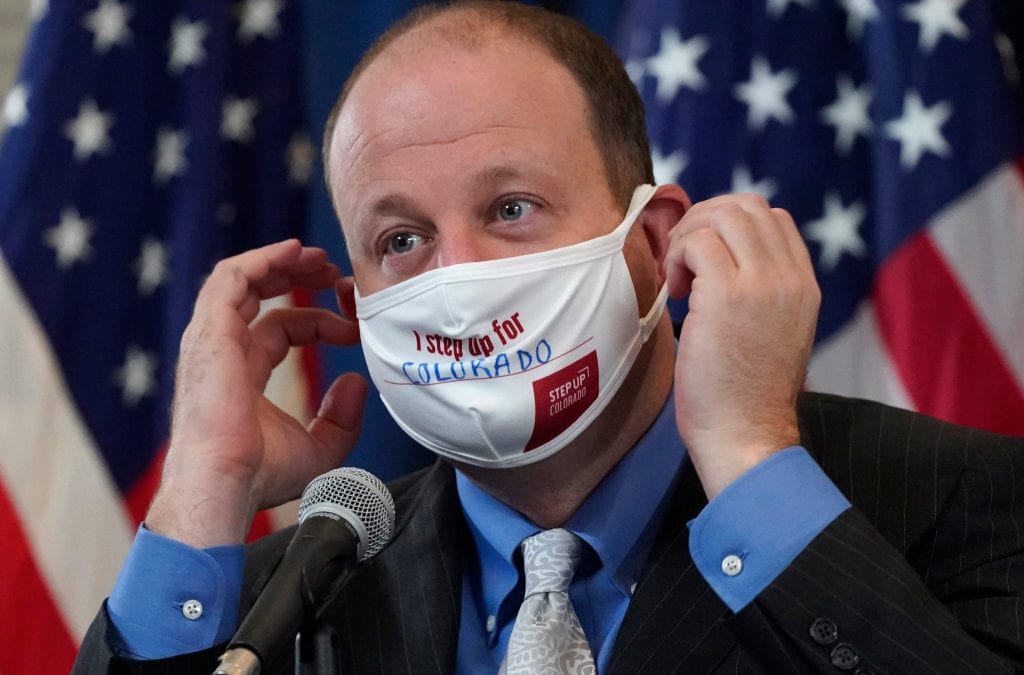 Denver and a number of other Colorado counties will be moved to Level Red on a newly revamped version of the state’s color-coded COVID-19 dial, officials announced Tuesday, ushering in tougher new restrictions to curb widespread transmission of the novel coronavirus without going into a full lockdown.

Without identifying them, Gov. Jared Polis estimated 10 to 15 counties will be moved to Level Red, which previously was the highest level and would have triggered a stay-at-home order — but the state has now added an even higher status, Level Purple. Denver Mayor Michael Hancock said “we expect to be there.”

Local health and political officials confirmed Jefferson, Arapahoe and Adams counties also are among those moving to Level Red.

“We are awaiting final details on those changes, as well as an associated public health order, and will share more information when available,” Jefferson County Public Health said in a statement.

Boulder County has not yet been notified by the state that it is moving to Level Red, said Chana Goussetis, spokeswoman for the public health department.

The state Department of Public Health And Environment is working with counties to determine which will move to Level Red, spokeswoman Gabi Johnston said in an email.

“We are at a pivotal juncture, and we continue to move in the wrong direction,” she said in a statement. “We must do all we can to ensure hospitals have the capacity to care for everyone who needs it. We need everyone to wear a mask, avoid socializing with anyone outside of their households, and physically distance.”

The new restrictions for the counties moving to Level Red include an end to indoor dining, although those restaurants can still serve takeout meals, and last call for alcohol will be moved from 10 p.m. to 8 p.m.

The updated dial will be effective on Friday, Nov. 20. Check it out. #Covid19Colorado pic.twitter.com/sw7XmKEsEc

The governor stopped short of ordering people to stay home by adding the new level to the state’s color dial system. Still, residents in counties that move in to Level Red are encouraged to stay home.

The changes for counties moved to Level Red include:

The changes to the dial framework comes as a majority of the state’s 64 counties have case rates that would qualify for a state-at-home order under the old system. The dial framework works by assigning a county a color level based on new cases, the percentage of tests that are positive and how hospitalizations are trending.

There were at least 34 counties at Level Orange, which used to be the second-highest set of restrictions. Level Orange caps most business capacity at 25%.

Of the counties at Level Orange, at least 29 have cases that qualify for Level Red, which would impose a stay-at-home order under the old framework.

Local public health leaders — including those moving to the new level — have pushed for tighter COVID-19 restrictions to come from the state. Yet, state leaders, including Polis, are reluctant to impose stricter measures in the absence of additional stimulus money from the federal government because of the economic toll of such policies on residents and businesses.

The state health department recorded 30,843 cases of COVID-19, the disease caused by the novel coronavirus, last week. It’s the sixth consecutive week that the state has recorded a record number of new coronavirus cases and reflects how infections are now at the highest level since the state had reliable data from testing.

There were 1,294 people hospitalized with confirmed COVID-19 and another 130 people with suspected COVID-19, according to the health department.