A Three Percenter militia Facebook page that appears to be run by Libertarian statehouse candidate Nathan Foutch posted threats against retired Army Lt. Colonel John Foley, who is also running for a statehouse seat (as a Democrat) in El Paso County.

In a June 18 Facebook post, Foley objected to members of the “Three Percenters” militia setting up a sniper position atop a parking garage in downtown Colorado Springs during a June 6 Black Lives Matter protest. Foley wrote, 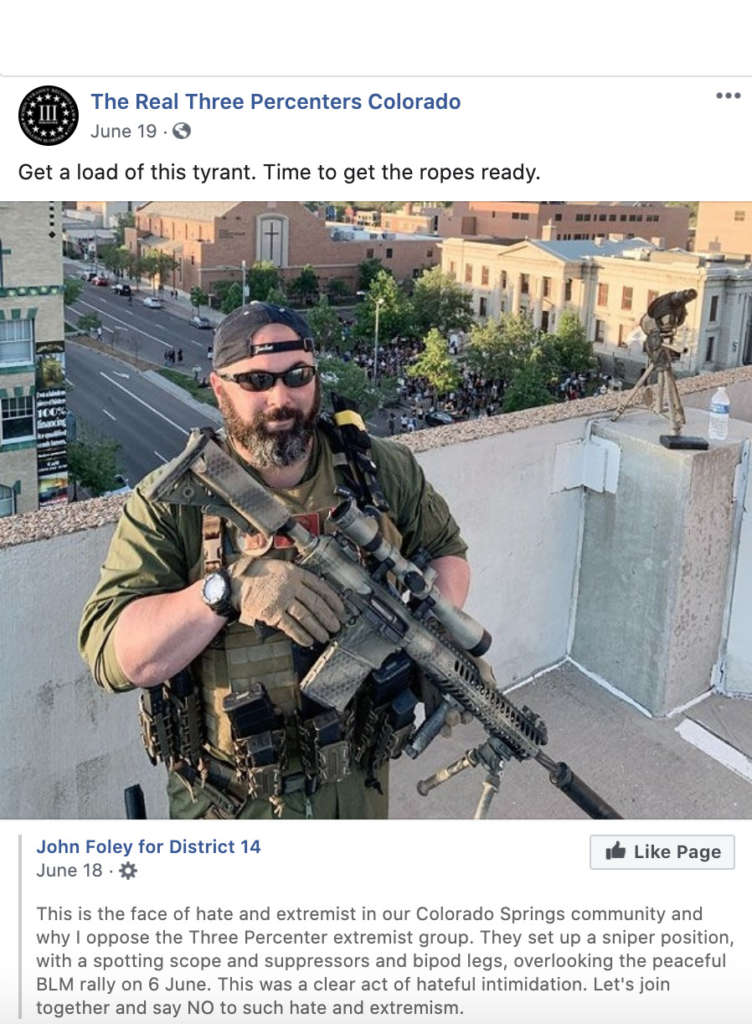 “This is the face of hate and extremist in our Colorado Springs community and why I oppose the Three Percenter extremist group,” wrote Foley on his campaign Facebook page. “They set up a sniper position, with a spotting scope and suppressors and bipod legs, overlooking the peaceful BLM rally on 6 June. This was a clear act of hateful intimidation. Let’s join together and say NO to such hate and extremism.”

Posts and comments made by the Real Three Percenters Colorado Facebook Page refer to Foutch in the first person.

The following day Foutch then commented on Foley’s page saying he was “spreading fear-based propaganda for [his] anti-gun agenda.”

Foutch went on to call Foley “a Communist who will be dealt with accordingly when the times comes for your treason.”

When Foley reshared the comment noting that it proved his point about the Three Percenters being a threat, Foutch responded “What a bitch of a man. Now he will twist it into a threat to pander to the other pussies in El Paso County.”

Reached for comment, Foley said he’d decided against contacting authorities, but he expressed concern over the Three Percenters’ belief in a wholly “unregulated militia.”

“I got into this race because my opponent sided with the Three Percenters and stood with them on the steps of the Colorado Capitol,” said Foley, referencing the “We Will Not Comply” rally that took place on Dec. 7, 2019. Members of the American Patriots III% militia provided security for the event, which concluded with Rep. Shane Sandridge (R-Colorado Springs) exhorting law enforcement to refuse to follow state law. “That was a disturbing scene, siding with a militia group,” said Foley.

The Southern Poverty Law Center lists four Three Percenter anti-government extremists groups in Colorado, two of which it considers to be militias.

Foley continued by clarifying his own position on the Second Amendment.

“I’m a big gun-rights supporter,” he said. “I own a lot of weapons, but everyone needs to leave their weapons at home. I get flak from both sides because I don’t believe in this open-carry mentality or this militia/mob mentality- on either side. Conceal carry is great. And open-carry for pistol- I like the ability to do that on certain occasions, such as when I’m in the national forest where there are bears and cougars. But in densely urban areas, open carry is just unwarranted.”

According to the Colorado Springs Independent, the Three Percenters at the June 6 rally claimed to be there to protect property from “antifa looters,” and to support law enforcement. Indeed the Indy reported that they were in contact with the Colorado Springs Police Department.

“All cops are bastards. If you are a LEO supporter, get the fuck off of this page. You are an enemy of the People. Police have a monopoly on violence. They are just smart enough to follow orders, yet too stupid to question said orders. ‘Just following orders’ is using the Nuemburg [sic] excuse, as in the Nazi trials. There is no such thing as a good cop. #acab”

The page also posted an image supporting the so-called “Boogaloo” movement, a loose-knit group of anti-government gun enthusiasts which was recently flagged by the FBI as a domestic terror threat.

Back in April, Foutch used the Real Three Percenters Colorado page to promote his statehouse campaign as the Libertarian candidate for House District 18 in Western El Paso County.

In a follow-up comment, Foutch posted (as the page account): “Freedom and liberty have been tread upon. I want to bring the Constitution back into our lives. The masses have forgotten about what it stands for. I will fight for the individual, which is the smallest minority.”

Numerous attempts to reach Foutch via phone, email and Facebook were unsuccessful. This article will be updated with any response received.