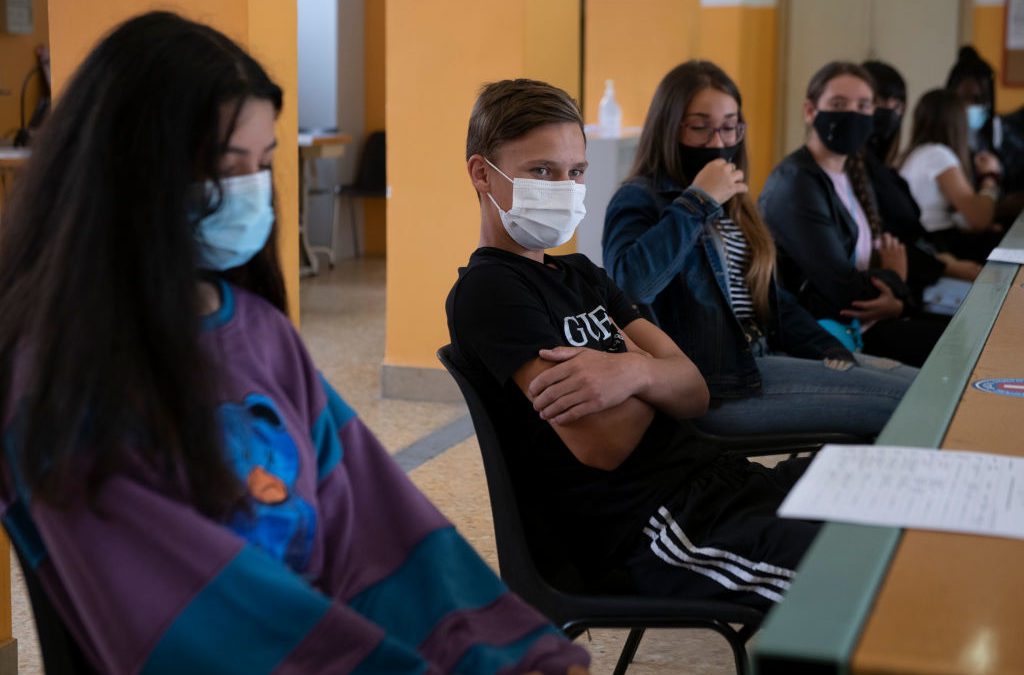 A middle school in Colorado has teachers taping the mandatory face masks students wear to their skin to force compliance, says a mother.

The case came to light after a sixth grader at Chinook Trail Middle School, part of Academy School District 20, sent her mother a selfie through the Timehop app showing the top of her mask covered in blue tape.

The parent, named only Stephanie, told Fox21 she shared the photo on social media to alert other parents and see if mask taping, which she considers to be a “type of a restraint,” was an isolated incident.

Stephanie commented that her daughter, who told her that because teachers had been enforcing the policy in this way for weeks, couldn’t see anything wrong with the act, “With the mask mandates and everything…she likes them because they hide her face ’cause of acne or whatnot.”

“What really made me sad was that she didn’t see what was wrong.”

THREAD: Forcing kids to tape masks to their faces is CHILD ABUSE. It’s happening in my backyard in Colorado Springs, according to one family. I spoke this morning with Stephanie M., mother of Rylee, a 6th grader at Chinook Trail Middle School in District 20, pictured here.

According to the anecdote, students are given one warning to keep their mask on and above their nose. If it falls, the teacher tapes it to their skin.

A second parent, Tori Skeldum, shared knowledge of the practice with the affiliate, “She said the teachers were wearing the masking tape around their wrists like bracelets and whenever someone’s mask would fall down, they would tape them.”

Stephanie said she was concerned children were being socially conditioned through the practice, “It’s developing some sort of mentality in our children.”

“Your face is you, that is how people know you. They are just doubling down on hiding you and not letting you breathe and…it’s conformity to the extreme.”

On Oct. 19, a spokesperson for the School District downplayed the issue in comments given to CBS, “Because of social media, we now have so many other voices in the mix that may not have been involved and so now there’s misinformation that’s mingled in with actual facts.”

“There are so many versions of this story. That is why we need to actually talk with every single student and find out what really happened.”

The mask mandate is a contentious issue at Academy School District 20. On Sept. 24, the District installed the ubiquitous measure for all students, staff, and visitors. However, students are only required to wear them in classrooms and can remove them between classes, because “students are not together for more than 15 minutes during the passing period,” according to KRDO.

District Superintendent Tom Gregory told parents in an email that he was not looking “to debate the effectiveness of facial covering/mask-usage” because, “The fact remains, under the current state regulations, universal masking, vaccination, and recent COVID-19 diagnosis are the only exemptions from quarantine.”

The outlet paraphrased Gregory as saying the mandate was required for the purpose of reducing quarantines because “more than 2,000 students and staff have experienced quarantines through the first six weeks of school.”

The announcement was made on a Friday. On Monday, students staged a walkout in protest and were joined by parents.

The protests continue. Parents and student now gathered outside the D20 admin building to show their opposition to the mask policy. pic.twitter.com/w9qcoqTeTh

One high school junior told KRDO she felt the mask mandates were a case of the District “trying to take our rights away from us.”

“It should be our opinion-whether or not we want to be vaccinated, we want to share that with someone, we want to wear a mask. It should be up to us not forced upon us. I feel like that’s our right as a human beings living in the U.S.A. because that’s what our country is formed around and about and it shouldn’t be taken away from us.”

A sophomore at the same school was quoted as saying, “I hope that the teachers, and staff, and district just get the idea that not everyone wants to wear a mask, not everyone is scared of it and the people that are can wear their own mask.”

The District’s spokesperson spun the mask mandate as a measure that’s all about keeping schools open in comments to KRDO, “What we heard over last year is please don’t send me back to remote learning.”

“If we stay on the course that we are on. We are going to end up back in remote learning.”