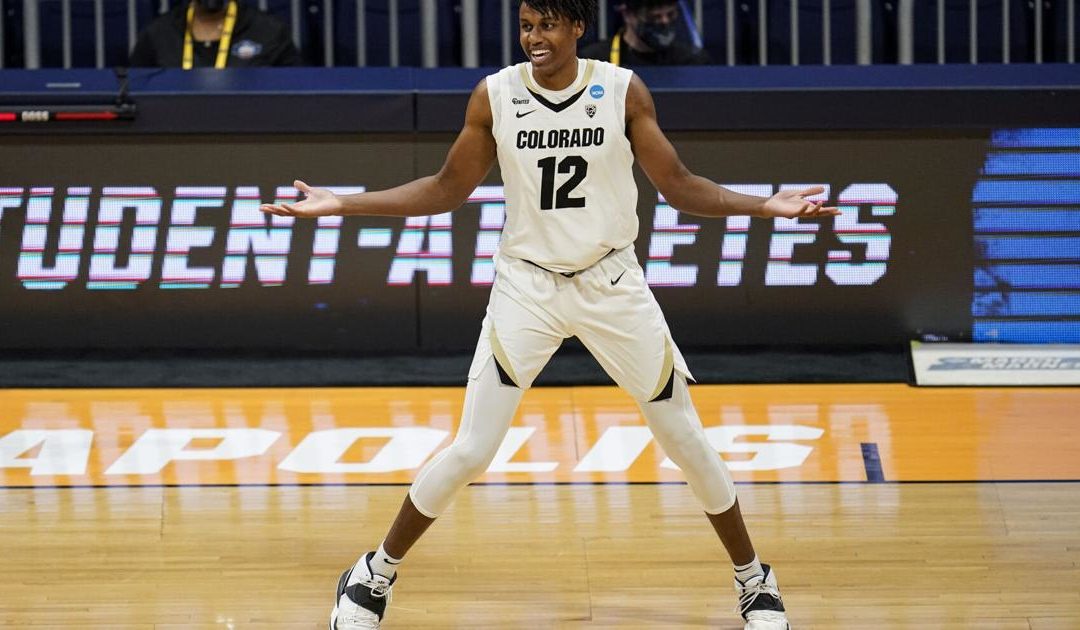 Colorado made its first trip to the NCAA Tournament in five years las season, and on a team full of seniors, the Buffs got an eye-popping performance from one of the more unlikely players on the roster — freshman Jabari Walker.

Walker scored a game-high 24 points on 9-10 shooting from the field and a perfect 5-5 from 3-point range in CU’s blowout win over Georgetown.

That game was the culmination of a season of flashes from Walker, a 6-foot-9 forward from Southern California.

He scored 23 points in a loss on the road at Cal and had a 15-point, 10-rebound performance in a close home loss to Utah earlier in the season. The makings of a star appeared to be in the works and now heading into the 2021-22 season, all eyes are on Walker to make the leap.

“The expectations we have is that he becomes an everyday guy,” Boyle said at CU’s media day last month. “Last year he didn’t have to do that because we had so many seniors with Jeriah Horne, D’Shawn Schwartz, McKinley Wright, and Dallas Walton, he was able to be that freshman that came in and gave us a spark off the bench and he was really good at that.”

Despite those flashes of potential, Walker’s overall numbers were relatively average for a freshman.

Walker averaged just over 7 points in a little under 15 minutes per game off the bench, but it was still enough for him to earn Pac-12 All-Freshman Team honors.

The key for Walker last year was how efficient he was, even if some of his lack of minutes was due to his own inability to stay out of foul trouble. The most important aspect of Walker’s game this season is consistency and making sure he’s not in foul trouble so he can play 30-35 minutes per night.

“You look at Jabari’s numbers last year relative to the minutes he played and he’s very efficient,” Boyle said. “He impacted the game when he was in there but he got in foul trouble some. He was a catch and shoot guy. Now we’re challenging him to be more of a well-rounded player and impact the game in different ways other than just shooting the ball from the perimeter. We know he can do that.”

This offseason was an important one for Walker’s developments, but it was less about adding things to his game, and more about improving mentally — learning how to play smart defense, preparing for a bigger role and the added expectations that come with being a go-to player.

“I’m not going into the game just like the quiet guy, the last one on the scout sheet looking to see if I have a breakout game,” Walker said. “That’s expected [this year]. So it’s about what else am I going to do besides scoring, what am I going to do to get this team to win. Last year it was like, ‘OK, let me knock down some shots for my team, let me help all the main guys,’ and now it’s like, ‘I need to get the most out of my teammates.’ It’s a different mindset this year.”

HIs teammates know what’s expected of him as well, and they’re all in on trying to help him reach his full potential. If CU is going to make it back to the tournament for the second year in a row, the Buffs are going to need a big season from Walker.

“We’re just challenging him everyday, just to keep working hard and keep his motor going,” senior forward Evan Battey said. “I just want Jabari Walker to be the best player he can be. That’s all I’ve wanted from day one when he got here. Obviously, we can see how high his ceiling is and we want to reach that. But he has a lot of work to do and I’ll be here to help him reach that and prepare for life as a pro. I want to see him as a pro.”

Here are some other things to watch out for as Colorado’s season tips off on Tuesday night at home against Montana State.

There are two big games in the nonconference slate that everyone is looking at for CU this season and they both come during a difficult month of December.

The Buffs will host both Tennessee and Kansas on Dec. 4 and Dec. 21, respectively, at the CU Events Center, where CU went 11-1 last season.

Of course the game against Kansas has some added weight for Boyle, a Jayhawk alum, but he’s hoping he sees nothing but black and gold in the crowd that night.

“I coached in the building my first year when we were in the Big 12 before we kind of established ourselves, where there were more Kansas fans in the building than should have been,” Boyle said. “And I also coached in a game a few years ago, this is when we beat them and there were some Kansas fans — there’s gonna be some Kansas fans here we know that — but it was 98 percent Buff fans, and it helped us win a game. I want our season ticket holders to understand number one, we’re making a commitment to you to allow you to buy extra tickets to those games to make sure that they get in Buffalo’s hands with your friend and neighbor or whatever. We’re asking and begging and pleading not to put them on Stubhub and sell them to Jayhawk fans.”

Taking the next step as a program

Making the NCAA Tournament was a big accomplishment for CU last season.

The Buffs played well in a strange season in the midst of a pandemic and came away with an appearance in the second round thanks to a talented group of seniors.

But now the key for Boyle and the program is getting back there again and making it a yearly tradition. The Buffs haven’t made the tournament in back-to-back seasons since the program went three seasons in a row from 2012-14.

“Obviously we’ve always known how important matchups are in the NCAA Tournament,” Boyle said. “That was pretty evident when we went to play Georgetown and Florida State, two totally different styles and one we had really good success with and one not so much. We were very McKinley Wright dominant last year, and have been the last four years. Which, for good reason, he’s a heck of a player who made unbelievable plays and we won a lot of games. This year’s team’s gonna be different because we’re gonna be a little bit more balanced. I think we’ve got a lot of weapons that can really hurt people offensively.”

Key role players to watch for

Walker isn’t the only sophomore that’s going to have a big role on this young team.

Keeshawn Barthelemy is the likely replacement for McKinley Wright at the starting point guard spot, but fellow sophomore Tristan da Silva is also going to be counted to play big minutes this season and could even be a regular starter for Boyle.

The forward from Germany knows what it takes to play in the Pac-12 as he watched his brother play at Stanford the previous four years and now he’s ready to make an impact in Boulder.

“I always put Tristan right in there with Jabari because he is a guy who can play multiple positions offensively, he can guard multiple positions defensively,” Boyle said. “Tristan da Silva can do a lot of things. We’re challenging him everyday to rebound the ball, stronger and tougher. He can put the ball on the floor, he plays with great pace. He doesn’t get sped up, and Tristian is the guy to me nobody talks about that has a chance to have as good a year as anybody on our team this year.