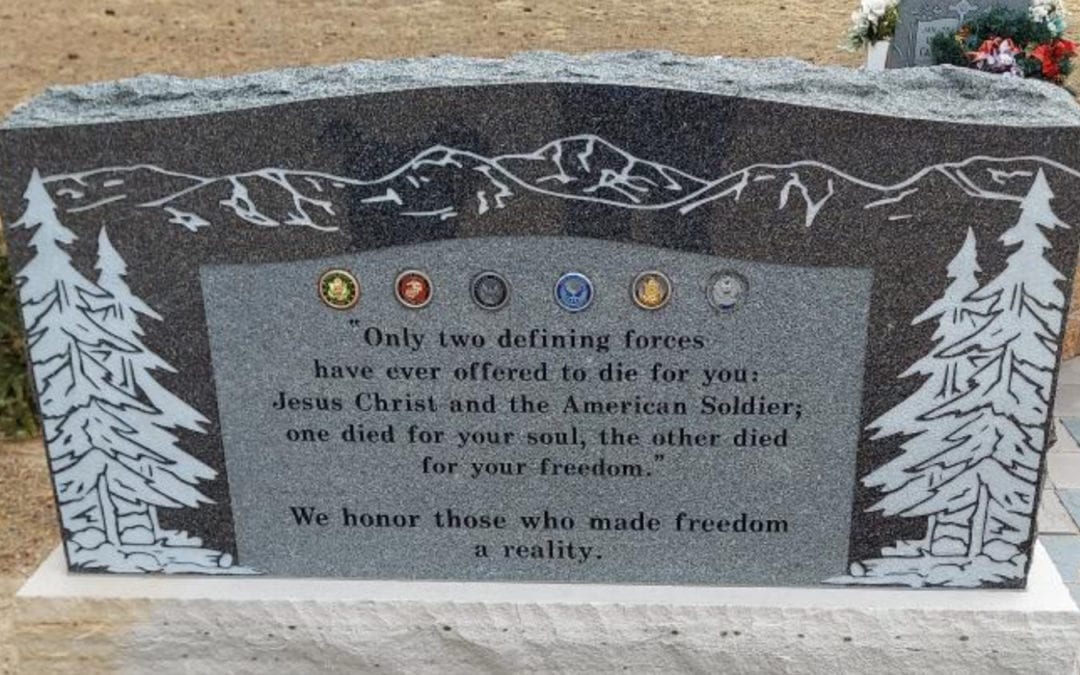 (RNS) — A memorial honoring veterans in a cemetery in Monument, Colorado, has attracted national attention due to its reference to Jesus Christ. Organizations ranging from the Jewish War Veterans of the U.S.A. to the Military Religious Freedom Foundation have called for the marker to be removed.

“Only two defining forces have ever offered to die for you: Jesus Christ and the American Soldier; one died for your soul, the other died for your freedom,” the monument reads. It’s a quote that first emerged on the internet in the early 2000s and has been falsely attributed to both former British Prime Minister Tony Blair, in the context of the Iraq War, and to Gen. George S. Patton, a maverick U.S. military commander during World War II.

The marker was placed near a flagpole at the municipal cemetery by a 16-year-old Boy Scout and his family, after some $50,000 in donations were raised as part of a Boy Scout project meant to honor all veterans and the boy’s grandfather in particular.

Adding to the controversy is the monument’s inclusion of copyrighted logos of the United States armed forces. According to the Department of Defense Instruction 5535.12, “DoD marks may not be licensed for any purpose intended to promote ideological movements, sociopolitical change, religious beliefs (including non-belief), specific interpretations of morality, or legislative/statutory change.”

The municipal government of Monument did not return multiple calls from Religion News Service.

An article in defense of the monument on the website of First Liberty Institute, a nonprofit Christian legal organization, described the marker as “private religious speech” and argued “the religious reference in no way suggests that the government is discriminating, excluding, or failing to honor military veterans of all faiths — or those of no faith — for their sacrifice.” The article noted the Boy Scout’s family purchased the plot where the memorial is located, “ensuring that the town does not own the memorial and is not responsible for its maintenance.”

“There is no issue with the Boy Scout or his project to honor his grandfather,” said Mikey Weinstein, president of the Military Religious Freedom Foundation. “The issue is that a sectarian and Christian supremacist perspective is being promoted.”

The city transferred multiple plots from its holdings in March. However, Weinstein said the transfer was done improperly. The sale of the plot was arranged after the monument was already in place and after it had sparked controversy.

Weinstein said the passage is also potentially offensive to first responders, sailors, airmen and other military personnel. Monument is a suburb of Colorado Springs, where the United States Air Force Academy is located.

Weinstein said his organization represents a group of families exploring legal action. Two-thirds of those families are practicing Christians.

“There is no issue with the Boy Scout himself,” Weinstein said. “He was ill-advised. However, state-sponsored sectarian displays violate the principle of separation of church and state as ingrained in the Constitution.”