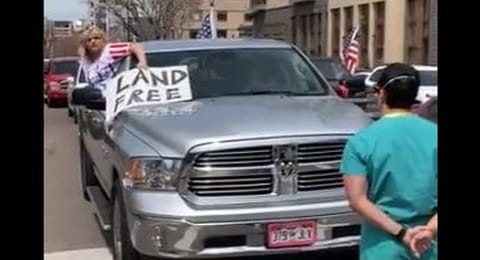 As Americans grow increasingly frustrated with ‘stay-at-home’ orders imposed by governors and mayors to help curb the spread of COVID-19, angst is building among healthcare professionals charged with caring for the victims.

That became obvious over the weekend in Denver, when reportedly a pair of medical professionals in scrubs confronted people who were protesting lockdown orders imposed by state and city officials.

Protests around the country are growing, and the left-wing media is quick to speculate that they may have been urged on by President Donald Trump’s “LIBERATE” tweets on Friday.

But, as seen in video captured by witnesses that has since gone viral, two nurses decided to confront demonstrators protesting Denver’s stay-at-home order on Sunday.

As you can imagine, the powerful video has spurred more than a few comments on social media, many of which were supportive of the nurses.

As a surgeon I’m constantly reminded that Nurses are the glue that really hold everything together.

Proud of these 2 RN’s in Colorado who stood up to peacefully protest people not abiding by stay-at-home orders. #CoronavirusUSA #COVIDー19 #TogetherAtHomepic.twitter.com/7CpbiVYwbG

I admire this nurse he is fighting to save lives and then you have bleached blonde fools hanging out of a car with a sign saying land of the free! These people are a joke.

Not today Karen. Nurses in Denver protest protesters who insist on breaking social distancing and stay at home guidelines. pic.twitter.com/rPexiKberS

This is going to backfire. They have no idea how many families have been impacted and how many have family wrking as doctors, nurses, paramedics, police, EMTs. As they abuse our health care workers, and basically spit on the dead and greiving, support for DJT is going to plummet.

As of this writing, more than 40,600 people have died from the virus out of more than 765,600 cases. A survey found that the percentage of Americans who know someone who has had the virus is steadily increasing.

But there have been more than 71,000 recoveries as well, a figure that is almost never mentioned in coronavirus-related stories.

And obviously, there is passion on both sides of this issue.

On the one hand, most Americans believe that the precautions taken thus far by governors and mayors — the adoption of social distancing rules, closures of non-essential businesses and schools, etc. — have been reasonable.

But far greater than the number of coronavirus deaths and illnesses have been the loss of jobs, many of which are gone for good. In four weeks’ time, we’ve gone from 3.5 percent unemployment in February to something close to 18 percent now, after 22-plus million people have lost jobs due to mandated business closures.

That includes many Americans who put their lifeblood and life savings into businesses that are now defunct.

And, as many of the protesters correctly assert, there is an issue of constitutionality here: The founders did not include the passage ‘except during emergencies’ in the Bill of Rights. And yet, Americans’ right to freely practice their religion, freely assemble for a redress of grievances and, earlier, the right to purchase and keep firearms for self-defense, have all been denied or otherwise impacted, thanks to coronavirus-related shutdown orders.

No one knows better than the healthcare professionals caring for coronavirus patients how deadly the disease can be. But, the mainstream media hasn’t exactly been stellar in reporting all of the facts about the impact of the disease.

It isn’t a planet-killer, in other words, and it was never going to be. The University of Washington model used initially by states and the federal government to craft often draconian response policies has consistently and dramatically overstated the death rate. It’s been since the outbreak began to spread in the U.S.

What we ought to learn from this pandemic is that caution and reason can exist on the same plain when it comes to dealing with extraordinary events like coronavirus.