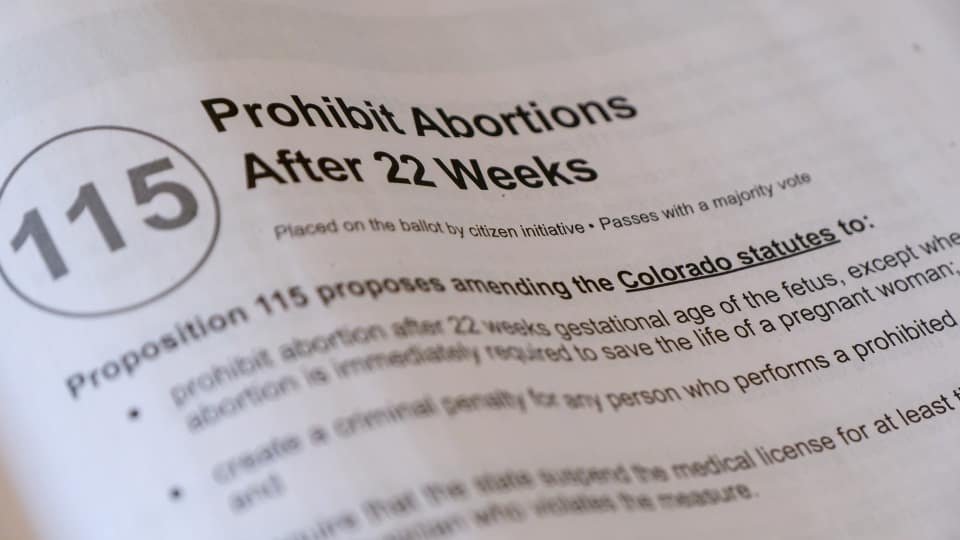 A measure that would ban abortions in Colorado after 22 weeks of pregnancy, except in cases where the mother’s life is at risk, failed Tuesday night.

Both supporters and opponents of Proposition 115 had predicted a tight battle over what supporters of the ban call “late-term abortion,” but opponents declared victory about an hour after the polls closed.

“We voted no because we trust patients and families to make the personal medical decisions that are right for them, without political interference,” Vote No on 115 campaign manager Lucy Olena said. “We voted no to keep Colorado a safe haven for abortion access because no one should have to cross borders to get the medical care they need.”

The measure went down 40% to 60%, according to unofficial returns but with about 75% of the vote tallied.

Coloradans have swiftly defeated three other ballot measures since 2008 that attempted to define a fetus as a person under the criminal code, but this question was different, targeting the point in pregnancy at which a fetus might survive outside the womb.

Abortion-rights advocates and anti-abortion organizations across the nation had their eyes on the Colorado measure, especially in the wake of the death of U.S. Supreme Court Justice Ruth Bader Ginsburg, an abortion-rights proponent, and the confirmation of her conservative replacement, Amy Coney Barrett. The change on the highest court is fueling speculation about whether it could strike down Roe v. Wade, the landmark 1973 Supreme Court case that protected abortion as a constitutional right.

Colorado is among the states with the least restrictive abortion access in the nation — one of seven that does not prohibit abortion at any point during pregnancy. Women travel from other states and countries each year to get abortions in Colorado. There were from 200 to 300 abortions after 22 weeks of pregnancy in each of the past few years, according to the state health department.

Proposition 115 would have outlawed abortion after 22 weeks gestation and made it a misdemeanor for doctors who violated the ban. It allowed for one exception: “when the abortion is immediately required to save the life of the pregnant woman.” It did not have exceptions for rape, incest, the mother’s health or a diagnosis that the baby would not survive.

Supporters of the ban said it was time for Colorado to end “birthday abortions,” meaning that women can get abortions right up to their due date in this state. Opponents, though, say that doesn’t happen, and that women who seek abortions after 22 weeks typically do so because their own health problems — including preeclampsia or lung or heart conditions — worsen later in pregnancy, or they find out about a lethal fetal diagnosis at their 20-week ultrasound.

Nationally, the vast majority of abortions, about 89%, happen during the first trimester, while about 1% occur after 21 weeks, according to research by the Guttmacher Institute, which supports abortion access.

The Colorado Sun is a reader-supported news organization dedicated to covering the people, places and policies that matter in Colorado. Read more, sign up for free newsletters and subscribe at .