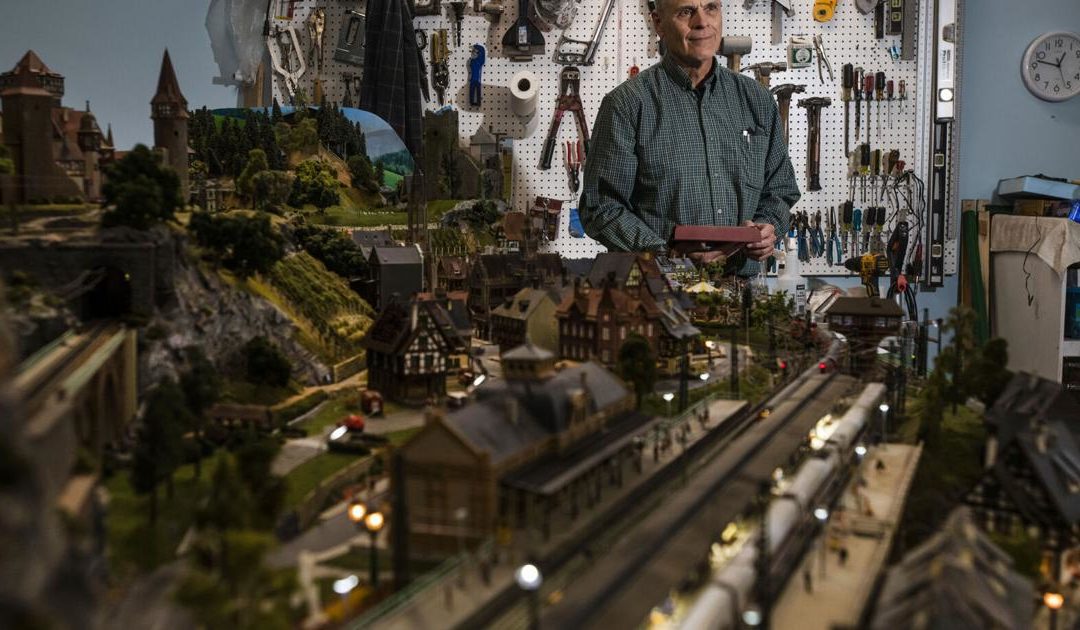 Follow the red bus as it follows a winding road around brick buildings, disappears under a tunnel and continues weaving through town, past the bakery and views of vineyards and castles. En route to its next stop, follow Gordon Preller’s fingers as he carefully picks up the bus, as if it was a piece of glass he dropped.

Preller turns the vehicle upside down to reveal an underbelly stuffed with batteries, a magnet and motor. He rigged the bus to automatically keep rolling on its tracks and to stop temporarily at spots of interest — you know, just how it might work in any other town.

Also just like in any other town, the bus is just one piece of this place, along with roads, cars, a train system and hundreds of people going about their day.

Unlike any other town, though, a child could easily fit each piece — a pig from the farm or tree from the hillside — in their hands.

“I get all kinds of reactions,” Gordon Preller says of his miniature masterpiece. “People can really treat it like a scavenger hunt and get lost in it.”

Preller started his miniature masterpiece in 2012, after a trip to the Netherlands to celebrate retirement. He had played around with model trains before, like when his wife, Kathy, inherited a small collection from a family member. At the time, she asked Preller to set something up for their grandkids.

Gondolas, trains and buses move throughout the intricate miniature village Preller has created.

That didn’t stop Preller, who had a long career as an electrician. He built on a small starting point and kept building, with help from thousands of items he has purchased or painted or crafted.

The 71-year-old found the hobby to be a fun and healthy way to fill his time, so much so that his wife calls it a full-time job. He found it to be a way to carry on an ode to craftsmanship and play.

Gordon Preller, 71, holds a miniature person with tweezers inside his workshop at his home east of Colorado Springs on Nov. 23, 2021. Preller is a master builder of creating miniature city-scapes inspired from his travels to Europe. Busy trains and buses move through out the intricate villages Preller has created. His models are also interactive and allow children and adults to press buttons to bring certain parts of the villages alive with lights, sounds and motion. Preller began building his miniatures in 2012 after a trip to the Netherlands and showcases his builds at model train shows and expos. (Chancey Bush/ The Gazette)

He also found it to be a way to honor his life. Throughout his “3D scrapbook,” as Preller calls it, there are nods to his travels and memories and loved ones. A miniature figure carrying Christmas presents out of a store? That’s his brother. A bakery? That’s for his wife. A beer garden on the top of a hill? That’s to remember how good beer tasted after a sweaty 4-mile hike with friends.

Preller, who lives on dozens of acres south of Colorado Springs, found another purpose for spending all those hours in the workshop just steps from his house. As he began taking his creation to model train shows around the state and beyond, he noticed how most collectors are “terrified of kids.” They put their models up high or behind glass to protect from tiny human error.

Gordon Preller’s miniature world isn’t just something to observe in wonder. It’s interactive, and he controls the trains using an electronic tablet.

“I understand it to a degree,” he said. “Everything is so delicate and worth thousands of dollars.”

But he started thinking, what do the kids get out of it? It’s in the hands of the next generation, after all, to carry on the tradition.

Preller’s village is purposefully lower to the ground, so onlookers of all ages can tower over the roads and roofs and search for details.

He also installed a series of interactive elements, which Preller says stands out in this old-fashioned world. He controls the trains using an electronic tablet. Then there are the red buttons, which anyone can control.

Gordon Preller, 71, is a master builder of creating miniature city-scapes inspired from his travels to Europe. Busy trains and buses move through out the intricate villages Preller has created. His models are also interactive and allow children and adults to press buttons to bring certain parts of the villages alive with lights, sounds and motion. Preller began building his miniatures in 2012 after a trip to the Netherlands and showcases his builds at model train shows and expos. (Chancey Bush/ The Gazette)

With the push of one red button on the side of the display, a carousel lights up and spins. Another button brings festive music to an afternoon on a patio. Another one sparks flames to a house that is, thankfully, already surrounded by fire trucks.

“Nobody else really has all of that,” Preller said of his town’s technology. “As far as I’ve seen.”

Preller sees these as open invitations for playing with his model, instead of just looking. He sees how people can be entertained for hours.

“I get all kinds of reactions,” Preller said. “People can really treat it like a scavenger hunt and get lost in it.”

To help with that, Preller printed clues in different places. Viewers are challenged to find things like a dinosaur slide, wedding and cemetery.

There’s so much else to see. There’s someone working on a car, a group of rock climbers and a guy banging on the door of a port-a-potty.

“You have to have really good eyesight for some of it,” Preller said.

Looking close, you might see a couple lounging on a blanket with a bottle of wine nearby. You might notice another couple fighting while leaving the pub.

You might see a family at the fair and a child holding balloons. You look even closer to see the balloons are lifting the kid off the ground.

That’s a little hint into Preller’s personality. For another hint, he pulls out a photo of him and Kathy “horseback riding together.” She’s riding a regular horse while Preller pedals a bicycle with a stuffed animal horse head attached to the handlebars. He’s wearing a cowboy hat and a big smile.

For Preller, there is fun to be had in traveling with just a backpack to the other side of the world. And there’s fun to be had here in his workshop, where he’s working on a new ski town complete with a restaurant that has a spinning roof.

Looking at life unfolding on this scale, it sure seems simple. Looking at Preller break into a happy dance when he shows off his toys, he sure seems happy.

“This is my little world here,” Preller said. “Emphasis on the little.”