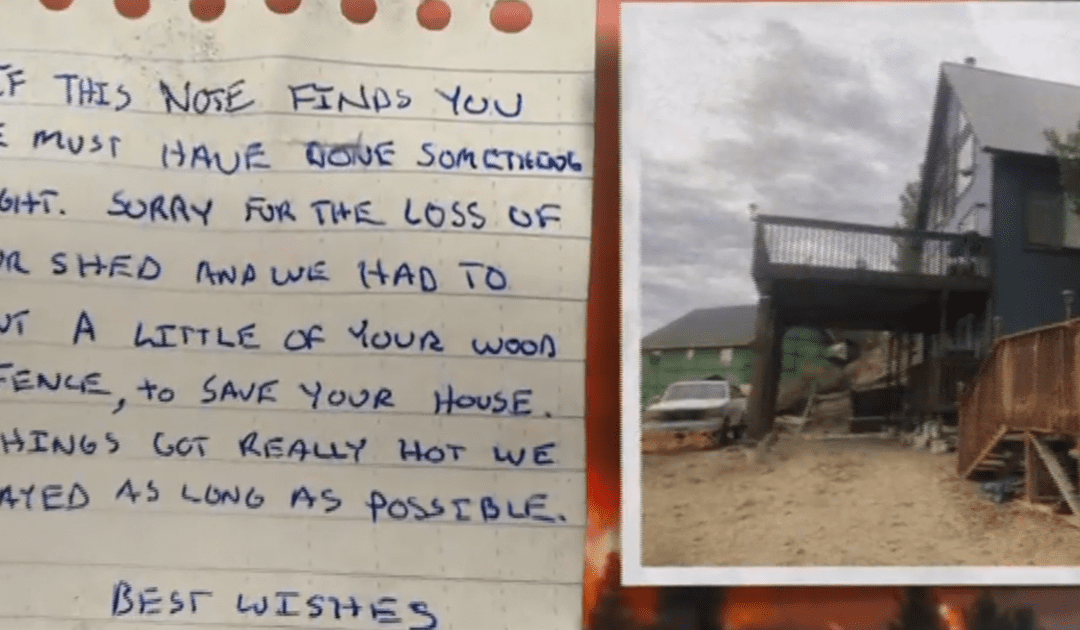 As the East Troublesome Fire raged near Granby, Colorado, Dan Stones could only imagine from a distance the fate of his family cabin. He said it was a “rollercoaster of a week” and didn’t even know about the blaze until he drove up over the weekend.

At one point, the wildfire jumped more than 100,000 acres in mere hours. Stones initially couldn’t believe it and thought his home was going to be a loss.

He said the fire had been burning about 30 miles away from his cabin and described the scenario as “very frightening.”

Ultimately, the flames burned very close to the cabin — about 5 or 6 feet away, according to firefighters. Fast forward a few days. When the smoke cleared, instead of ashes, a note with this message was left behind:

“If this note finds you we must have done something right. Sorry for the loss of your shed and we had to cut the wood fence to save the house. Things got really hot we stayed as long as possible.”

“It absolutely blew me away,” said Stones. “And I’m a grown man, and I can admit I wept.”

CBS News asked the firefighters with the U.S. Bureau of Land Management, who left the note, if they were surprised by the homeowner’s reaction.

“Ah, it was heartwarming,” said Beau Steele, one of the firefighters.

Kyle Frary, the firefighter who wrote the note, added, “There’s a lot of good people that are doing the exact same thing we did. We just got credit for this.”

Frary explained that when he first started his career he was taught to leave a quick note if action has to be taken on a person’s property, which is what happened in this instance.

The grateful cabin owner said the note was so powerful and too good not to share with the world.

“I get goosebumps,” he said. “I probably cried more in the last week than I have since I was 4 years old. It’s been wild.”

As the act of kindness from the firefighters makes the rounds around the globe, Stones also has his own message of paying it forward.

“This is where we roll up our sleeves. This is where we give back,” he said. “And, you know, so one of the things that I really want the world to know is like, please, if your house is still standing, donate that to emergency workers or to displaced families.”

As of Tuesday, the wildfire had blackened more than 192,000 acres and was 20% contained, according to the U.S. Forest Service.

#EastTroublesomeFire A HUGE toast to @MeekerFire #1446 tonight. We got your note. Inside the burn line and saved. Forever in your debt and with tears of gratitude. You are truly SUPERHEROES. Words do no justice. THANK YOU. pic.twitter.com/5uDHhtbc4i