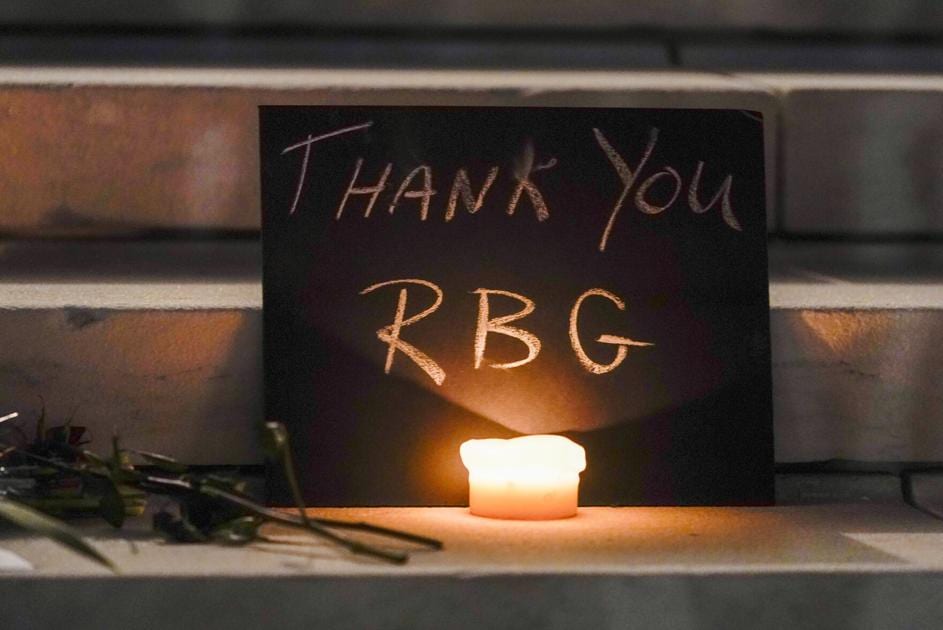 The death of Supreme Court Justice Ruth Bader Ginsburg was met with tributes and sorrow from Colorado leaders Friday as officials in both parties hailed the diminutive legal giant as a trailblazer and inspiration.

“Few Americans have done as much as Ruth Bader Ginsburg to pull America closer to its ideals,” said Democratic U.S. Sen. Michael Bennet, the state’s senior senator, in a statement. “Her tenacity, brilliance, and moral compass will be deeply missed, especially at this fraught moment. My thoughts are with her family and loved ones.”

Said Republican U.S. Sen. Cory Gardner in a statement: “It is with a solemn heart that I pray for the family of Justice Ruth Bader Ginsburg. Thank you for your service to our country and our nation’s highest court. Our nation mourns the loss of a trailblazing leader.”

Democratic Gov. Jared Polis said in a statement that Colorado and the nation “mourn the loss of a titan.”

“We have lost a fearless advocate for women and families and someone who never stopped working toward greater equality for all in the eyes of the law,” he said. “I am deeply saddened by the passing of Justice Ruth Bader Ginsburg. She spent her incredible career giving a voice to the voiceless and standing up for what is right. Her words and her legacy will live on in all those she has inspired. We will forever be grateful for her contributions to making our country a better place.”

“Ruth Bader Ginsburg was an icon, a trailblazer and one of the greatest people to ever grace our nation,” said former Gov. John Hickenlooper, Gardner’s Democratic challenger. “Her death is a loss that will be felt for decades, and her life is one that will be celebrated for generations to come. Rest in power Justice Ginsburg.”

Calling Ginsburg “a hero,” Democratic U.S. Rep. Diana DeGette said: “Her dedication to advancing women’s rights and equality for all was unrivaled, and her presence on the highest court in our land will be deeply missed.”

Denver Mayor Michael Hancock tweeted: “Justice Ginsburg was a trailblazer — a champion for justice, a brilliant legal mind and a legend — and her influence on young women is unmatched. Her impact, and her loss, will be felt for generations to come. RIP #NotoriusRBG.”

“A tremendous and devastating loss for our country,” tweeted Democratic U.S. Rep. Joe Neguse. “Rest In Peace to Justice Ginsburg, a true giant for civil rights, equality, and the rule of law. May her memory be a blessing.”

Democratic U.S. Rep. Jason Crow said in a statement: “Our nation lost one of our greatest heroes and public servants today. My heart breaks as our nation mourns. May Justice Ruth Bader Ginsburg Rest in Peace, and may our country find a path forward that honors her spirit of justice, equality, and dignity.”

Ginsburg will be remembered as “a trailblazing giant of American jurisprudence,” said state House Speaker KC Becker, D-Boulder, in a statement.

“I am heartbroken to hear of her passing,” Becker continued. “Justice Ginsburg was appointed to the Supreme Court the summer before I started law school, and throughout my years there she was an unyielding force of inspiration for myself and my fellow women law students. She has no doubt inspired leagues of young lawyers for three decades since, and I am confident that she will continue to inspire any woman seeking to practice law long after her passing. May she rest in peace and power.”

House Majority Leader Alec Garnett, D-Denver, said in a statement: “With every decision, every dissent, and every question raised during Supreme Court hearings, Ruth Bader Ginsburg furthered the cause of justice.

“At 5’1, she was a towering presence — a fierce ally to all those who fought for equality and the improvement of our country and a fearless foe to those who did not. I can only hope and pray that Cory Gardner, Mitch McConnell and the Republican Senate in Washington will respect the legacy of an American icon, as well as their own rules about Supreme Court appointments during presidential election years, and wait until 2021 to vote on a nominee for her seat.”

“One of the biggest losses imaginable,” tweeted Democratic Secretary of State Jena Griswold. “Thank you Justice Ginsburg for inspiring countless people, and safeguarding our nation.”

Democratic State Treasurer Dave Young tweeted: “It’s impossible to put into words how sad I am to learn of the passing of Ruth Bader Ginsburg. What a giant of a person. What a loss for our country.”

Democratic congressional nominee Diane Mitsch Bush, a former state representative from Steamboat Springs, said in a statement, “Justice Ginsburg fought for justice until her very last breath. She secured reproductive freedom for all Americans and wouldn’t stop until all of us were treated equally under the law. She is and will always be a shining example of what a public servant should be. May her memory be a blessing.”

Lauren Boebert, the Republican running against Mitsch Bush in the 3rd Congressional District, tweeted: “I pray the Holy Spirit, the Comforter, is present with RBG’s family, healing hearts and bringing peace. America stands with you tonight in your mourning.”

Morgan Carroll, chair of the Colorado Democratic Party, said she struggled to express Ginsburg’s importance to empowering women in the workplace.

“As a graduate of CU Law and an attorney, I’ve always looked to Ginsburg as a source of inspiration,” Carroll said in a statement. “The ‘Notorious R.B.G.’, as so many called her, shattered the glass ceiling at a point in time when few women attended law school, and it was thanks to her fierce determination that women were guaranteed equal protection under the law via the 14th Amendment.”

Added Carroll: “From reproductive health, to marriage equality, to voting rights, to disability rights, Ginsburg’s impact on the course of our nation’s history will be felt for years to come. My heart is broken for her family and loved ones, and we grieve with them as our country mourns the loss of an icon, a titan, and one of the greatest legal minds our country will ever see.”

Republican U.S. Rep. Ken Buck, the chairman of the Colorado GOP, said in a statement: “Tonight, the country mourns the loss of a great jurist and an influential trailblazer. The thoughts and prayers of Colorado Republicans are with her family and loved ones. Rest in Peace, Justice Ginsburg.”

Karen Middleton, president of abortion-rights group Cobalt and a former Democratic state lawmaker, said the community was grieving Ginsburg, “a woman who was truly larger than life and whose impact will be felt for generations.”

“Ruth Bader Ginsburg inspired all of us with her lifelong commitment to equality, to reproductive rights, and to making our country a better, fairer place for everyone,” Middleton said. “One of the last things Justice Ginsburg did was uphold Roe v. Wade and the Constitutional right to abortion. Her legacy of protecting reproductive rights will inspire us to fight even harder this fall to protect those rights here in Colorado, and to hold accountable those who don’t share our values

“‘RBG’ has been a rallying cry for a long time. And we will honor her by renewing our commitment to upholding the ability of all Coloradans to access the health care they need, including abortion care, without fear, shame, or systemic barriers.”