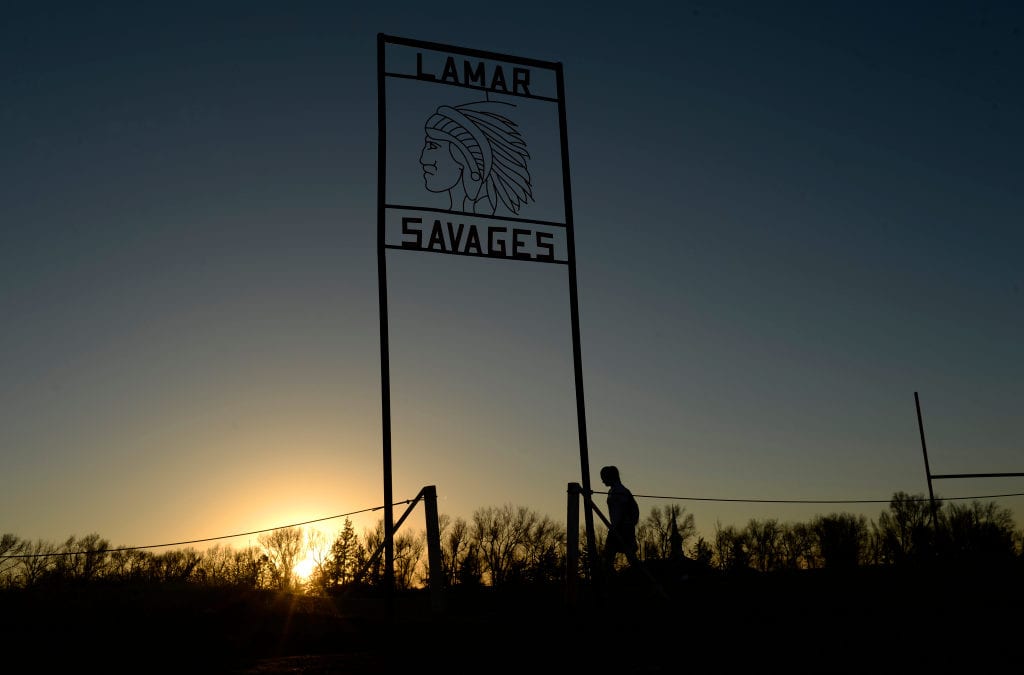 Colorado schools with mascots like “Savages” and “Reds” would have to change the derogatory American Indian symbols or face monthly fines under a bill just introduced in the Colorado legislature.

Just 25 schools have such mascots. Many others have already making the switch to something less offensive, but others have not changed despite recommendations, said bill sponsor and Wheat Ridge Democrat Sen. Jessie Danielson]. Her proposal would ban American Indian mascots and give schools until June, 1, 2022, to remove them. If they don’t, they’d face a monthly fine of $25,000.

“It’s long overdue,” said Glenn Morris of the Colorado chapter of the American Indian Movement. “There’s just no logical justification for them continuing it and it’s just a matter of privilege getting in the way of doing the right thing.”

Schools like Arapahoe High School and Strasburg High School that have existing agreements about their mascots with native tribes might be exempt from the ban, though that is still being discussed, Danielson said.

The effort comes as people, governments and sports teams across the country are examining racist symbols in public places. Last fall, a geographic naming board in Colorado was formed to examine renaming racist or derogatory mountains and open spaces.

Various attempts by advocates to change the mascots of some Colorado schools in the state have recently been successful, while other efforts are ongoing. A renewed push began last year Lamar — whose high school mascot is the Savages — by a group of alumni and students who formed “Lamar Proud” and are petitioning the school board to make a change.

Ongoing discussions with the Lamar School Board have not brought about the change the group had hoped for. Alumnus Jacob Reed, who graduated in 2012, supports the new bill, saying he didn’t realize when he was a student the connotations the mascots carried. But as he learned more and listened to indigenous voices, he said became part of the effort in Lamar.

“We’re really in this to move Lamar and Colorado to be a more open and inclusive society and we’re just starting at the mascot level,” he said of “Lamar Proud.”

Colorado isn’t alone in its push: Maine and Oregon already have statewide bans. Washington State’s similar bill just passed the House, Massachusetts lawmakers also are considering banning the mascots and Wisconsin’s governor would look to use state money to help schools remove the mascots. Utah lawmakers tried for a ban, but the resolution failed last week.

On a national level, Washington’s NFL team dropped its slur from its name last summer, Cleveland’s MLB team will find a new name soon and the NCAA banned American Indian mascots in 2005.

Arguments for and against

Colorado has tried this before. In 2010, a bill to require approval by the Colorado Commission of Indian Affairs for any Indian mascots was ultimately withdrawn. Democrats couldn’t pass a bill to ban the mascots in a split legislature in 2015. That same year, then-Gov. John Hickenlooper formed a commission to study American Indian representation in schools, but only four schools agreed to get involved. The commission had recommended the removal of all American Indian mascots in the state.

Opponents of changing mascots and names previously argued that the logos are not intended to be disrespectful and have been used for decades, so they would be difficult to change. Some have cited monetary concerns.

Sen. Don Coram, a Montrose Republican who opposes the new bill, is a graduate of Montrose High School, home of the Montrose Indians.

“I think it’s a local issue, not a statewide issue. … There’s so much respect for the Ute Nation in my district,” he said. “We’d never do something to disrespect them.”

But these mascots are denigrating and humiliating to American Indians, said Rep. Adrienne Benavidez, a Commerce City Democrat who is co-sponsoring the bill.

“It continues the idea that native people are not people, that they’re cartoon characters or something else or that they no longer exist. And that’s not at all true,” she said.

And after a year where people across the nation demanded social and racial justice, there’s more to be done, Danielson said, and “the time to stop Colorado from using these derogatory mascots is now.”

Darius Smith of the Denver American Indian Commission, who is of Navajo descent, said American Indians have been trying to bring the mascot issue to light for decades and he applauds the sponsors for including Indigenous people in their discussions.

He dismissed many of the Republican arguments he’s heard against changing mascots.

“They’re going to try to coat it by saying, ‘Oh, it’s too costly of a thing for these schools to do,’ and not really looking at the human side of it and not saying ‘This is wrong and has wrong from the beginning,’” he said.

Former state Rep. Joe Salazar brought the 2015 bill, and is excited to see the bill finally have a chance, despite how long it’s taken.

“One thing I know as a community activist, as a former legislator, you don’t see Black and brown bills passed right out of the gate — we have to struggle through it,” he said.

Salazar, who is of Apache descent, recalls receiving death threats and racist messages when he championed the idea in 2015. One particular letter stands out. He read it in a committee hearing and it was so bad, the committee chair told him he didn’t have to read it. Salazar had to pause here and there, but he got through it.

“It’s not just about a feel-good bill. It’s about rectifying the inequities of the past,” Salazar said, noting that research has shown the negative effects on children of such mascots and the stereotypes.