Colorado lawmakers reconvene to consider stimulus plan, but experts question the cost to the state 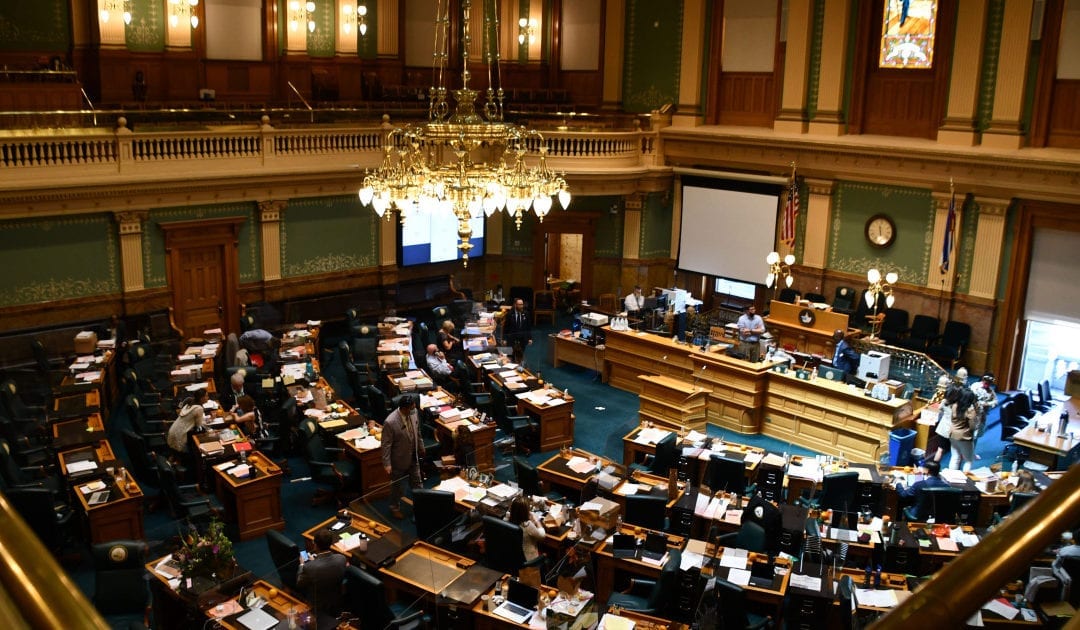 The unemployment checks for Englewood resident Dana John and her husband ended in July, and the $1,200 federal stimulus money is long gone.

One small hope on the horizon is the $375 check Colorado is sending as a stimulus to lower-income unemployed workers. It’s not much, but John said it’s much needed. “I don’t know if we will be getting the $375 or not,” John wrote in an email. “I am so scared that we are gonna be living on the streets very soon here.”

Her situation is the kind that Democratic Gov. Jared Polis and Colorado lawmakers say they have at the front of their minds as they return to the Capitol on Monday for a special legislative session focused on a coronavirus relief package.

The one-time payment to out-of-work Coloradans — expected to arrive in the coming days — is part of a $1.3 billion stimulus package the governor has proposed to help citizens. In the three-day session, the Democratic-led General Assembly will consider only the most pressing spending items — totaling up to $300 million — but more action is expected during the next regular session in early 2021.

The question surrounding the legislation expected during the special session, and the broader stimulus package, is whether it can even make a difference given its meager size and the deeper problems with Colorado’s budgetary picture.

In interviews, a handful of economists in Colorado say the answer is not clear, but something may prove better than nothing, considering Congress’ inaction on the issue.

“Anything right now is helpful,” said Mac Clouse, a finance professor at University of Denver’s Reiman School of Finance. ”And the people that it’s targeting are the people that are hurting the worst. And they’re the ones that need it the most. So I think it’s a good idea. I guess the sad thing is that it can’t be more.”

The financial help is minimal compared to what the federal CARES Act and other relief bills provided earlier this year. About $24 billion in federal aid flowed into Colorado and helped unemployed workers pay bills and helped keep the state’s economy afloat.

“This available state money will clearly not be sufficient to get Colorado through another economic fallout if something similar to April were to occur again,” said Chris Brown, director of policy and research at the Common Sense Institute in Greenwood Village. “Therefore, the priorities should be (to make) everything possible at this moment to keep businesses open safely, to keep consumers happy, and keep the labor force healthy and really able to work.”

Questions remain about whether Colorado can afford the stimulus package

Polis said his stimulus plan would generate 15,000 jobs and boost the state’s economy by a fraction of a percent. The governor’s office declined to make the details public, but officials said most of the impact is related to the stimulus checks, as well as broadband, road and other infrastructure projects in the proposal.

Other states are making similar moves. New Mexico lawmakers returned for a special session last week, during which they approved $1,200 checks to some of those receiving unemployment.

“I think the approach we are taking is certainly a very good way to provide economic relief,” said House Speaker KC Becker, D-Boulder. But, she added, “certainly what we can do is nothing compared to what the federal government can do.”

The concern is that offering the emergency pandemic relief is just too much for a state — or any state — to bear as the economy continues to be in turmoil.

Colorado’s insurance trust fund ran out of money in August and has so far borrowed $573 million from the federal government to pay unemployment benefits to thousands. Meanwhile, the $375 payments, slated to be mailed Dec. 1, are coming from $168 million out of the state’s reserve fund, which is already below where it should be.

“The state’s budgets are not in great shape,” Clouse said. “And they don’t have a whole lot of surplus money that they can take from somewhere to do any more than what Polis has found. It’s amazing that he’s talking about doing that given everything else we hear about how bad the state budget looks, and what kind of shortfalls there are.”

The money available for the governor’s stimulus proposal is based on the governor’s rosy projections for tax collections — and a legislative forecast suggests the money won’t materialize.

Moreover, if revenues do beat projections, the money is available because of the budget cuts lawmakers made earlier this year.

“Those were dollars that were going to go to plug huge structural deficits for transportation, child care, education and higher education. In spending these dollars, those are dollars we are not spending on really important structural needs that the economy needs, with or without a pandemic,” said Scott Wasserman, president of The Bell Policy Center, a progressive advocacy group in Denver.

In addition to the one-time checks being sent to 430,000 people, the economic relief lawmakers will consider includes $105 million for restaurants and bars by allowing them to keep up to $2,000 a month in their collected state sales tax.

Another $50 million will replenish the funds for the state’s rental assistance programs open to tenants and landlords. There are also longer-term investments totaling $360 million dedicated to infrastructure improvements for broadband, streets, roads and bridges, some of which may be considered in the special session, with more to come when lawmakers convene for the next term in January.

State Sen. Jack Tate, R-Centennial, is sponsoring the legislation to provide restaurant relief, but he acknowledged that more needs to be done. He is proposing another bill to protect businesses from lawsuits related to COVID-19 if they follow the state’s public health protocols. A similar measure didn’t make any progress in the legislative session earlier this year.

“At the end of the day, the way to help businesses and the economy is to provide a favorable business and economic climate,” Tate said. In terms of the future outlook, he said “confidence is so important for business investment.”

“Given what we have seen in past recessions and past policy responses, we know that additional public funding and planning around a recovery can help provide a bit of a buffer to our most disadvantaged and struggling workers,” said Kane, who co-wrote a report exploring an infrastructure stimulus plan for COVID-19.

Adding infrastructure to the proposal is smart because it often receives bipartisan support because of the interest in job creation and improving the efficiency and performance of essential services that we all depend on right now, Kane said.

He pointed to the New Deal from the 1930s. It funded “forward-looking” projects that delivered clean water, electricity and telephone service to some people for the first time. That’s like broadband today, which seems plentiful in urban areas but as the pandemic forced students into remote learning, thousands of children in Colorado couldn’t access — or afford — reliable internet service, even in Denver.

“As we’re thinking of the short-term relief measures, we shouldn’t overlook the foundations that are going to power our long-term recovery,” Kane said.

If the goal is to get the state’s labor force back to work, then the $50 million earmarked in the proposal for child-care providers makes a lot of sense to experts because it allows families to continue making a living, said Brown at the conservative-leaning Common Sense Institute.

“One area that in our research that has consistently shown up is the struggles of parents, and particularly mothers, who left the labor force in large numbers following the March stay-at-home orders,” Brown said. “If we’re facing a potentially similar situation (as the spring), it’s really critical for policy and potential funding to be able to support working parents and working mothers to stay in the labor force and address the childcare and schooling needs.”

Timing, though, is everything. When the $1,200 federal stimulus check arrived earlier this summer, John was already unemployed and receiving the extra $600 each week from the federal government.

But then for a reason unknown to them, the couple’s unemployment payments were put on hold in July, around the same time the $600-a-week federal program ended.

Because the state’s unemployment rate fell below 5% on Nov. 7, it triggered the end of a special 13-week extension of federal unemployment benefits on Nov. 28. The rate, however, only included those on regular state unemployment, or around 131,429. It excluded nearly 100,000 more who’ve exhausted state benefits or are gig workers receiving federal pandemic benefits. As of Nov. 7, the number of Coloradans still receiving some sort of unemployment benefit was 224,076.

John said she hasn’t received a benefit check since July and now is facing eviction.

Polis extended the eviction ban last week. Tenants must fill out a declaration form saying they are unable to pay due to COVID-19 and show it to their landlord. Evictions are banned through Dec. 20, but tenants are still responsible for back rent.

Both renters and landlords can tap two rental assistance programs to help. The Emergency Housing Assistance Program is for tenants while the Property Owner Preservation program  allows landlords to apply for rent on behalf of a tenant who cannot pay.

As of Nov. 20, the tenant program has paid $4.4 million to provide rent to 1,750 tenants in Colorado, while the landlord program paid $16.1 million to provide rent for 11,117 households, according to data provided by the Colorado Department of Local Affairs. The programs were funded by $22.5 million, mostly from federal CARES Act money.

But states cannot continue to find the funds needed to match the federal government’s support. And it’s shocking that Congress has been unable to move on new relief for months, said Wasserman at The Bell Policy Center.

“The fact that the federal government is paralyzed as it is right now and the fact that they are not moving aid to the states and cities is just absolutely flooring to me,” Wasserman said. “The bottom line is that state and city budgets were never designed to, nor can they really provide, the kind of relief that’s needed in this economy right now.”